Crispin Glover hates the ending of "Back to the Future" 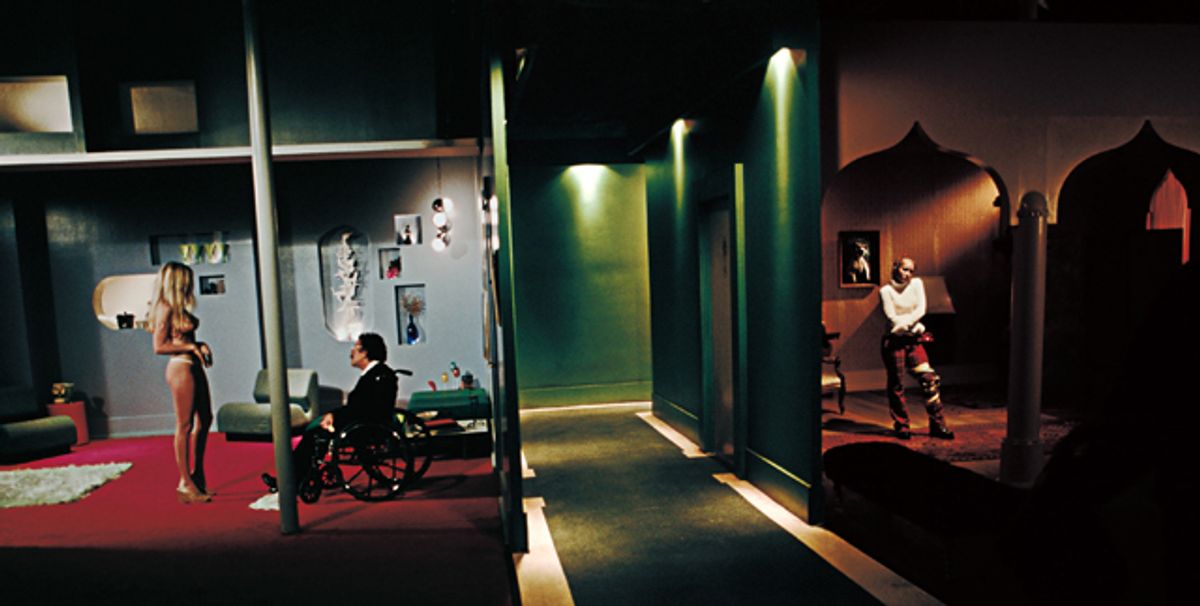 “It is Fine! EVERYTHING IS FINE.” Photograph by David Brother. (courtesy the artist/MAD Museum)
--

If you only know Crispin Hellion Glover as a quirky actor with the gift of an unsettling gaze, then you’re missing out on the major focus of his career as the producer of experimental films that lunge voraciously into taboos. And it’s easy to miss, as the only way to see these films is when he screens them himself. This past weekend, Glover stopped by the Museum of Arts and Design for a two-night installment of his slideshows and films, and later this month he’ll return to IFC.

The program at MAD called It Is Crispin Hellion Glover began both evenings with Glover striding out on stage, bearded and wearing a three-piece suit, then giving an intense reading of eight of his books (he’s also an author), each with a first person stream of consciousness. These were followed by screenings, with It is Fine! EVERYTHING IS FINE. (2007), a murder mystery in 1970s TV style that just happens to have a man with severe cerebral palsy as its villain, on the first night, and What Is It? (2005) on the second, where every character but Glover’s has Down Syndrome, and a massacre of snails occurs.

All of this already needs a heavy amount of context, which is why Glover has not released the films and only presents them on 35 mm himself, followed by a very, very long Q&A (he didn’t leave the stage until he was absolutely sure everyone had asked their questions, as he said he didn’t want anyone to go and write angry things on the internet). But while the films, and his slideshows that are narrated live with a Renfield-like brooding, would be easy to just frame as the outrageous antics of an eccentric movie actor, he seems totally genuine. How else could you come out and face the open questions of strangers for your taboo-filled art films night after night, when you could easily just release them into the wilds of the digital world?

It’s likely the films that you know Glover for were part of his ending up at this point of exploring film taboos. As George McFly in “Back to the Future,” he got major attention, but, as he told it, he responded negatively to the film’s ending with the characters being rich, and not just in love, believing that the emotional ending should have been enough. He didn’t appear in the sequels, but the filmmakers used footage of him from the first film and an actor wearing prosthetics to make it appear as if he had, which resulted in a lawsuit. Due to that, the Screen Actors Guild now has limitations in agreements so that filmmakers can’t mimic the likeness of actors in that kind of way. Along with this, he expressed a general disenchantment with “corporately funded and distributed” films not asking audiences to ask questions, although he is appreciative to the industry for allowing him a career that funds his avant garde work. His small part in “Charlie’s Angels” (2000), for example, funded much of the set building for ”It is Fine! EVERYTHING IS FINE.”

And so he has been touring with films and slideshows for the past eight years, and the interest in him as an actor in “Willard” or “Bartleby”  or “River’s Edge” or even “Alice in Wonderland” is probably driving a huge portion of the audience there. Plus, being an oddly  personable presence on stage definitely allows a different sort of openness to these films than if you were to just watch them on your computer. The sex and violence, especially in ”It is Fine! EVERYTHING IS FINE.,” is rather shocking. (Glover noted that if they’d filmed the script by Steven Stewart, the man with cerebral palsy who wrote and starred in the film, exactly as written, “it would have been a XXX porn film.”) But knowing that this was imagined as a rage-induced fantasy of someone of normal intelligence, who was locked in health institutions and treated like someone who wasn’t, for years, offers an emotional connection, or that “emotional catharsis” as Glover put it. ”The film is not a documentary, it is a fantasy, but it is a fantasy of a person acting out their life in a certain way,” Glover said. “What Is It?,” likewise, involves sex and violence, all from people with Down Syndrome, in a film that Glover described as “my reaction to the psychological restraints to the film industry over the last 30 years, where everything that would make an audience uncomfortable is excised.”

Are these films still kind of crazy viewing experiences where the word “visceral” only covers the first few snails disintegrated with salt? Sure, but it’s also oddly fascinating, especially to see how someone like Glover continues to use a Hollywood career to fund avant garde art that only the few who journey to his screenings can see.