In a three-page insult to Elijah Cummings, he flip-flops on releasing committee interview transcripts 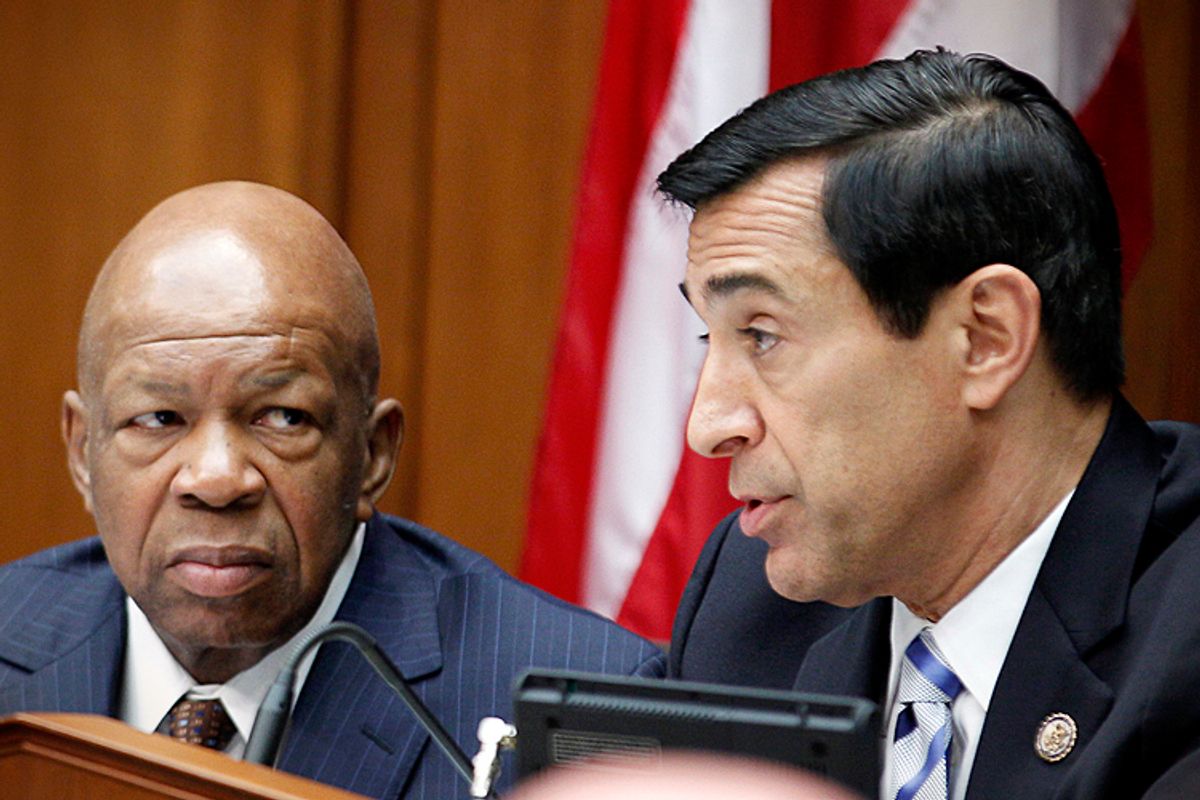 House Oversight Committee Chairman Darrell Issa put on a clinic in rudeness Tuesday, releasing a letter to ranking member Elijah Cummings that’s essentially a three-page insult, calling Cummings “reckless,” “irresponsible” and “obstructionist” for releasing the transcript of an interview in which an IRS manager said there was no evidence the White House was involved in Tea Party targeting, and telling CNN’s Candy Crowley that “the case is solved.”

Your decision to make that declaration in a very public way was irresponsible and emblematic of your general aversion to conducting meaningful oversight of the Administration. In fact, any time the Committee endeavors to engage in such an effort, your participation is generally limited to obstructing or criticizing the process, if you decide to participate at all. I urge you to adopt a more responsible approach.

In the letter, Issa goes back on his own promise to Crowley “the whole transcript will be put out,” which he made after she called him on his evidence-free claims that “directions” to target the Tea Party groups for extra scrutiny “emanated from Washington.” Now he tells Cummings that releasing transcripts of the committee’s interviews with IRS staff and managers would “needlessly jeopardize the integrity of the investigation and hamper the Committee’s ability to get to the truth.”

You have to read the whole letter. It’s shockingly condescending and disrespectful to the veteran Maryland Democrat, as if Issa was his boss, not his colleague, or a teacher upbraiding an impertinent student. Issa takes Cummings to the woodshed for “obstructionist tactics” going back to his early skepticism about Issa’s “Fast and Furious” investigation, the new chairman’s first effort to smear the Obama administration and particularly Attorney General Eric Holder. Apparently Cummings “sent several letters designed to frustrate the Committee’s ability to uncover information” about Fast and Furious, and he also sent a letter objecting to the committee’s way of obtaining information on the administration’s “failed green energy programs.” Cummings sent letters? What a thug.

Serving as the ranking Democrat on Issa’s House Inquisition Committee would test anyone’s patience, but most times I’ve seen him in action, Cummings tries to model calm in the face of crazy. When Issa opened hearings into the IRS’s apparent targeting of Tea Party groups for extra scrutiny in their quest for tax-exempt status, Cummings made clear it was a bipartisan effort, denouncing “gross incompetence and mismanagement” at the IRS and declaring, “I share the Chairman’s very serious questions.”

But when Issa went on CNN June 2 and called press secretary Jay Carney “a paid liar” and accused the White House of directing the Tea Party targeting, Cummings had had enough. He followed up with Crowley the next Sunday, calling on Issa to release the full transcripts and telling her, “I’m willing to come on your show next week with the chairman with the transcripts if he agrees to do that. If he doesn’t, I’ll release them by the end of the week.” The same day Cummings released a transcript of an interview with a self-described “conservative Republican” IRS manager in Cincinnati who told the committee Washington had nothing to do with the inquiry. “I do not believe that the screening of these cases had anything to do other than consistency and identifying issues that needed to have further development,” the manager said.

In a statement Cummings blasted Issa’s reversal on releasing the transcripts. “Chairman Issa changes his mind so fast that even when I agree him, we’re not on the same page,” he said. “I fully support responsible oversight, but cherry picking transcript excerpts to fuel partisan and unsubstantiated claims is not a credible or effective way to investigate.” Cummings didn’t comment on the rude and offensive tone in Issa’s letter. I’m sure he’s used to it. The farce that is Darrell Issa knows his glass house is protected by GOP congressional leadership. At least for now.