NSA has a propaganda center to make it seem fun!

There's a lot you'll never know about the ultrasecret spy agency, but you can buy a coffee mug 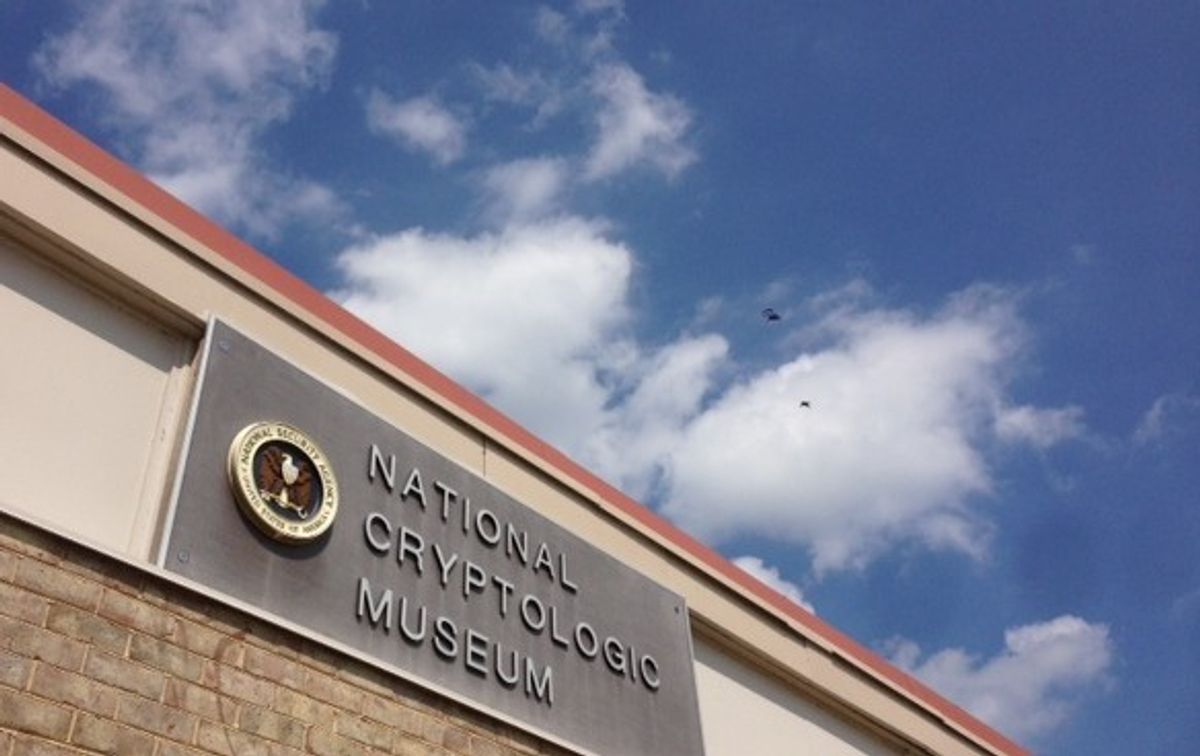 You, as an average American without security clearance, cannot know the National Security Agency's budget (it's classified), or how many people it employs (also classified -- some guessitmate by counting parking spaces), let alone really understand why it needs its own power plant and enough data storage for 500 quintillion pages of text. You can, however, visit the agency's gift shop and buy a coffee mug.

I did Tuesday afternoon on a visit to the only part of the clandestine agency that most people will ever be able to access, the National Cryptologic Museum. The museum is perhaps the largest bone an agency so secret that it's sometimes wryly referred to as "No Such Agency" throws towards public outreach, and it's not very big one. Sequestered in a squat concrete outbuilding behind the gas station in a corner of the NSA's Ft. Mead, Maryland campus, the museum feels a bit like a regional historical society that happened to stumble across a cache of some of (what was a the time) the world's most cutting-edge military communications and cryptology gear.

That's not to say it's worthless. To the contrary, the museum offers a fascinating education about codes and code breaking, if you're into that sort of thing, from crude Revolutionary War cyphers (masks and "dictionary codes"), to the mechanical encryption of the World Wars (you can try using a famed Enigma machine), through today's secure smartphones (like the one Obama has). There are cameos from John Nash and Native American code talkers and, weirdly, Martin Luther King, and a wall dedicated to the "women in American cryptology" (by the end of World War II, some 80 percent of the workforce at the Navy's y HQ were women).

But not surprisingly, the exhibits blur the line between public education and propaganda. Concerns about privacy or extralegal activities or keeping Congress in the dark are glossed over, when mentioned at all. Some exhibits feel a bit defensive, like one on the USS Pueblo, a spy ship captured by North Korea in 1967 and held to this day, which notes that the vessel was on a mission "from the NAVY (not the NSA)."

There's no mention of Room 641A or ECHELON or data collection and mining, which are increasingly central to the NSA's mission. To be fair, the museum is about y, not the NSA per se, but it features satellites and supercomputers and secure radios, so given everything the country has been talking about this week, the omission was felt. But the other people looking around on a Tuesday afternoon in the summer -- a few older couples a group of people in uniform gathering in an adjacent conference room for a party -- didn't seem to mind.

It's all part of an effort to make the work of an agency so secret that the presidential directive creating it wasn't even declassified for a generation seem fun and approchable. There's an exhibit on the Rosetta Stone (it helped archaeologists "decode" Ancient Egyptian hieroglyphs!) and even, perhaps most unexpectedly, a whole section on Depression-era hobo markings. Hobos used various chalk glyphs to mark good places to camp out or warn fellow travelers about vicious dogs, something the NSA museum illustrates with a model train set and miniature town. It's an interesting bit of history, but feels like it belongs in the Steinbeck museum, not that of the country's largest intelligence agency.

And there's plenty for "future codemakers and codebreakers" to see too! "Cyrto Cat," "Decipher Dog," and their furry friends pop up from behind text-heavy plaques about SIGINT to quiz kids with fun questions whose answers have to be decoded via a cypher. Which country had schoolchildren give the ambassador a wooden carving of the Great Seal with bug hidden inside? (the Soviet Union!). There are even an assortment of codebreaking games to be played on touch screens throughout the place. And make sure to pick up the "CyrptoKids FUN BOOK" on your way out, or check out the NSA kids website.

But of course, a visit would not be complete without a visit to the giftshop. In addition to an assortment of NSA-branded mugs (if you see something, say it into your morning cup of coffee), you can pick up golf balls, along with tees, and towels; a whole line of NSA apparel from fleeces to polo shirts (one t-shirt for the kids reads, "I'm a , , , I break codes"); mouse pads; pens; keychains; blankets and posters. Also available are items branded with the insignia of the NSA's main regional offices, including the Hawaii station where leaker Edward Snowden worked.

But make sure you plan ahead because the museum is closed weekends, except for the first and third Saturdays of the month. They're busy the rest of the time.