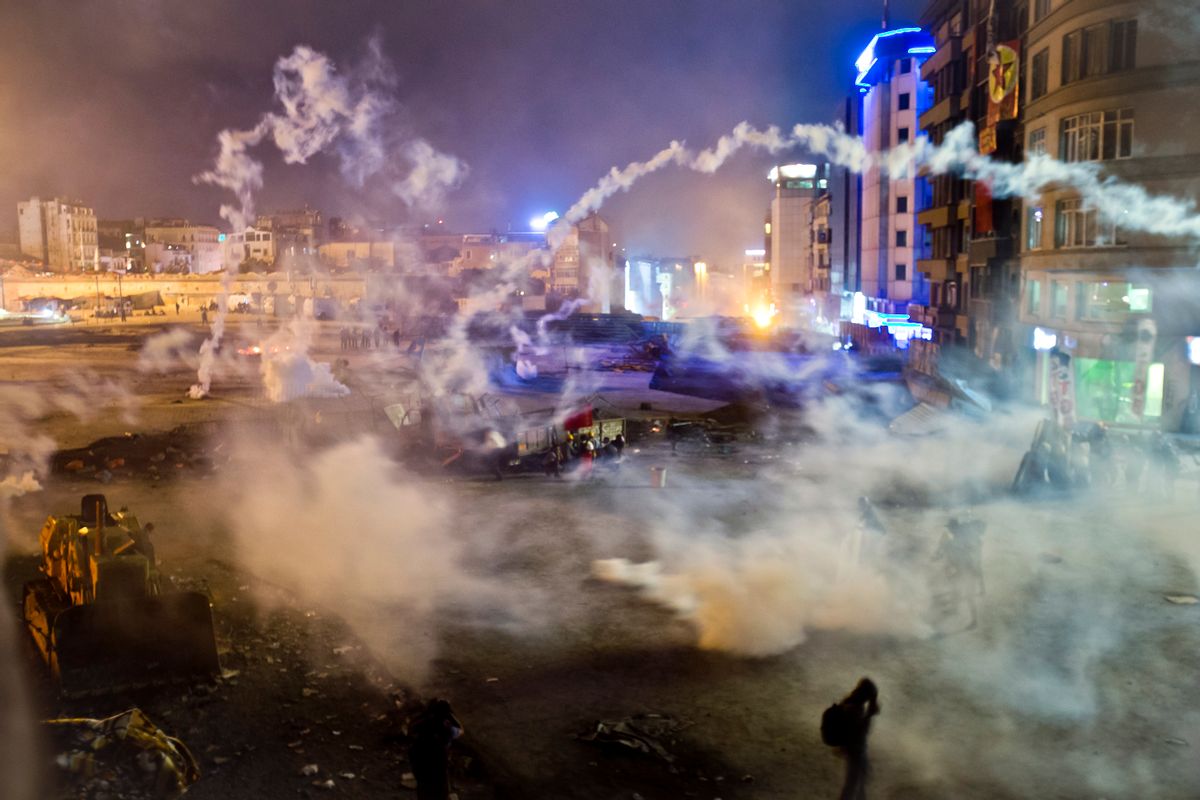 Taksim Square is flooded by tear gas as clashes between protesters and riot police continue into the night in Istanbul Tuesday, June 11, 2013. (AP/Vadim Ghirda)
--

Nearly two weeks of protests across the nation have shaped up as perhaps the biggest test in the 10-year rule of Prime Minister Recep Tayyip Erdogan — who protesters say is increasingly authoritarian, a charge that he and his allies strongly deny.

President Abdullah Gul, seen by many as a more moderate voice, said the government could not tolerate more of the unrest that has disrupted daily life for nearly two weeks, but authorities would listen to protesters' grievances.

"I am hopeful that we will surmount this through democratic maturity," Gul told reporters. "If they have objections, we need to hear them, enter into a dialogue. It is our duty to lend them an ear."

It was unclear exactly who would be taking part in the meeting scheduled for 4 p.m. (1300 GMT) at Erdogan's office in Ankara, and whether the meeting will have an impact in brokering an end to the protests.

Activists had doubts about the talks' legitimacy: Only an actor and a singer — with unclear connections to the protesters — had agreed to take part, and some leaders of civil society groups, including Greenpeace, had previously said they would not participate because of an "environment of violence."

Gul lashed out at foreign media, as international investors have been concerned about how the disturbances could affect Turkey's fast-growing economy. There has been a double-digit percentage drop in the main stock index since the beginning of protest.

After a night of violence, traffic returned to Istanbul's Taksim Square early Wednesday, with taxis, trucks and pedestrians returning to the streets. A heavy police presence stood off to the side, near a new barricade erected before dawn to prevent riot police from firing tear gas into the square's still occupied Gezi Park.

Hundreds of protesters remained in the park, clearing up after a night of trying to fend off tear gas, followed by an early morning storm that blew down tents and soaked bedding and blankets. At the park's entrance on Taksim Square, a massive barricade of wrecked cars and construction material stood as rudimentary protection from the police.

Throughout Tuesday, riot police firing water cannon and tear gas clashed repeatedly with pockets of protesters throwing stones and setting off fireworks in pitched battles. The unrest didn't simmer down until just before dawn.

Erdogan has insisted the protests and occupations, which he says are hurting Turkey's image and economy, must end immediately.

The protests erupted on May 31 after a violent police crackdown on a peaceful sit-in by activists objecting to a project replacing Gezi Park with a replica Ottoman-era barracks. They spread to 78 cities across the country and have attracted tens of thousands of people each night.