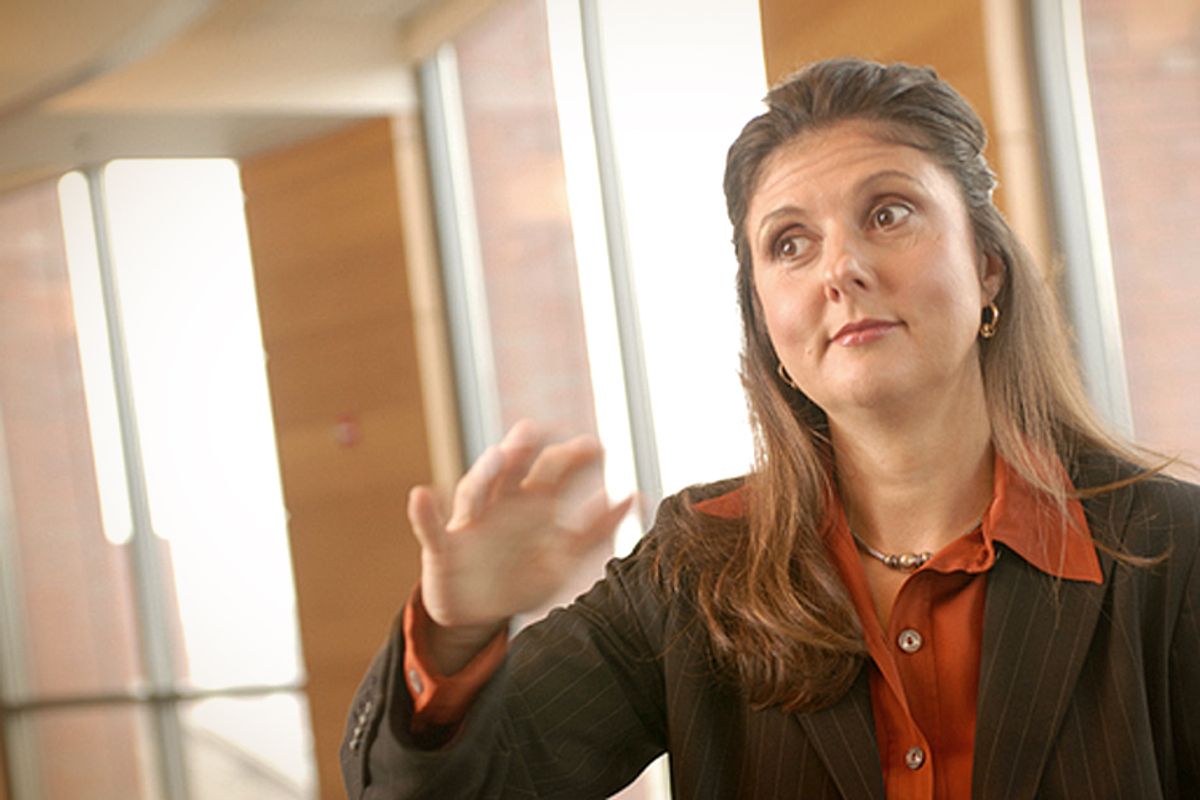 “Taking time out of the market comes with a lot of baggage, for women,” said Betsey Stevenson, a public policy professor and economist who's just been named to Obama's Council of Economic Advisers. She explained that the costs of even a temporary absence from the workforce are felt decades down the road: “You never get those lost wages back … you lose any gains you’ve made, come back in at a lower wage … there are promotions you don’t get.”

Stevenson spoke in D.C. on Wednesday at a New America Foundation forum devoted to issues affecting contemporary families, including single motherhood, new trends in divorce and if and how marriage equality will transform the institution of marriage. Since the president had announced his intent to appoint Stevenson to the three-person council just two days earlier, her insights about marriage, divorce and women in the labor force were particularly interesting: She'll now be tasked with giving the president economic advice to inform domestic policy, meaning she'll have an effect on the home lives of countless Americans.

The intended topic of conversation for Stevenson and her partner, Justin Wolfers (also a professor at Michigan and economist), was “Home Economics: How the Changing Economy Shapes Decisions to Marry—or Not Marry.” But Stevenson spoke most passionately about what happens to women who choose to stay home rather than remaining in the workforce after having children. Thinking about such economic decisions in the short term, rather than the long term, might be tempting for new parents. Still, Stevenson urged the audience to consider  “the effects of stepping out today for the rest of your time in the labor force.”

Since the New America Foundation is a nonpartisan think tank, Stevenson and Wolfers studiously avoided taking the discussion about the costs of leaving the workforce, even temporarily, into the realm of potentially partisan policy prescriptions. Though the United States is one of only three countries in the world not to mandate paid maternity leave, legislation to mitigate the problem remains, for whatever reason, a cause primarily championed by Democratic legislators.

In an earlier panel on single mothers, writer Katie Roiphe came the closest of all the guests to a suggestion of what America could do to make having children easier for women, though she introduced her arguments with, “I don’t feel qualified to make policy proclamations.” She noted that France has near-universal day-care access, though in the United States “our response is moralism,” instead of support. Roiphe has been inflammatory on other subjects, but on Wednesday she introduced an important dimension to an at times myopic discussion of the challenges single mothers face.

When it came to increasing public support for moms who work, Stevenson pointed out that the problem transcends gender: “If we’re going to have women playing an equal role in the labor force, then we have to think of it as a parents' issue, not just a woman’s issue.”

She and Wolfers also see the modern institution of marriage as one altogether different from marriages decades ago. While couples in generations past were highly specialized (i.e., one breadwinner, one home worker), married people today do more tasks together, or switch off. With the advent of modern technology, Wolfers joked (in seriousness), “Housework has become so simple that even a man can do it.” Anyone can bake a cake from a boxed mix or do a load of laundry, and so gender roles have changed.

Which isn't to say Wolfers and Stevenson never specialize.

“I do all the bills and taxes, and Justin deals with the technology,” explained Stevenson.

“I have no idea how much money I have,” Justin said drolly. “The benefit of marriage has eroded over time,” they concluded, and so they remain unmarried, though they often cite the gendered unfairness in the tax code when filing joint returns as the primary reason.

Their union is admirably egalitarian -- Wolfers is, for the second time, following his partner to D.C. (the first being when Stevenson was chief economist at the Department of Labor). He’ll work at the Brookings Institution as a senior fellow – hardly a chopped liver scenario. Incidentally, the last female on the Council of Economic Advisers, Christina Romer, was also in a relationship with a fellow high-profile economist (David Romer).

What is exciting about Stevenson’s nomination to the Council of Economic Advisers is her decidedly gender-conscious and humanistic approach to economics. “I’m an out breast-feeder,” she confidently said at one point in the discussion. It took the Affordable Care Act, she noted, to amend the Fair Labor Standards Act to require that employers provide a place other than a bathroom and break time for employees to express breast milk.

Though in their partnership it's Stevenson who tends to put concepts in more opaque economic language -- the couple has a routine in which Wolfers will interject, “To put it in understandable terms,” and then reword her train of thought -- her research highlights markets and behaviors often ignored by other economists. It’s critical for America to have such a perspective with ready access to President Obama’s ear.