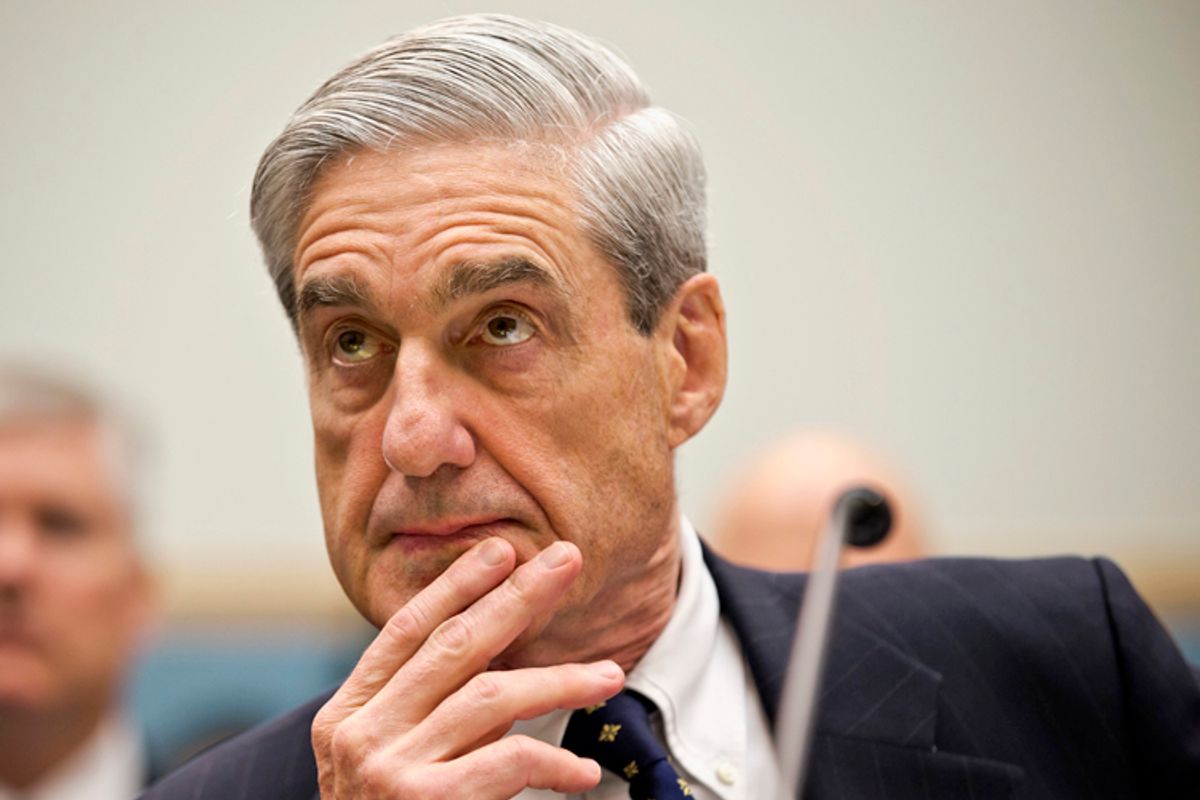 Could the National Security Agency's massive surveillance programs uncovered this month have stopped 9/11? That's what outgoing FBI Director Robert Mueller said before a House Judiciary Committee hearing today, in the latest escalation from administration officials defending the programs. First, officials said the program had helped stop a plot in New York, then they said it had stopped "dozens," and now the big one -- 9/11.

Had the program been in place at the time, Mueller said, counterterrorism officials may have been able to connect the dots and could have "derailed" the plot entirely. He pointed to one specific case: There was an al-Qaida safe house in Yemen that was in contact with a house in San Diego where plotter Khalid Almihdhar was staying, and:

If we had this program in pace at the time, we would have had been able to identify that particular telephone number in San Diego... If we had the telephone number from Yemen, we would have matched it up to that telephone number in San Diego, got further legal process, identified Almihdhar... The 9/11 Commission itself indicated that investigations or interrogations of Almihdhar once he was identified could have yielded evidence of connections to other participants in the 9/11 plot. The simple fact of their detention could have derailed the plan. In any case, the opportunity was not there.

Indeed, the 9/11 Commission Report, the definitive account of the attacks and the intelligence shortcomings that missed it, details the basic facts of Mueller's testimony. But the report offers little evidence to support his conclusion.

Then, as now, the NSA is tasked with foreign signals intelligence and generally prohibited by law for surveilling domestic targets unless it gets a warrant from the secretive court created by the Foreign Intelligence Surveillance Act of 1979, which approves 99.99 percent of all requests. That was true on Sept. 10, 2001, as it is today. But the report did not find that the NSA lacked the powers it needed.

"NSA had the technical capability," the report's authors wrote. But "the NSA did not seek FISA Court warrants to collect communications between individuals in the United States and foreign countries, because it believed that this was an FBI role." They add that the NSA filed fewer FISA requests than it had in previous years and that it had a number of "problems with inaccuracies in the applications" that allowed existing ones to lapse.

The point about the FBI reflects the central finding of the report, which was a lack of unity of effort, not a lack of information. Agencies were flooded with reports, anonymous tips, intercepted signals intelligence, and even walk-ins to FBI offices about al-Qaida plots -- "the system was blinking red," as former CIA Director George Tenet said. There were more than 40 articles related to bin Laden in the Presidential Daily Briefings from Jan. 20 to Sept. 10, 2001. Rather, what the report found was that intelligence agencies did a poor job of communicating with each other and sharing intelligence to get a fuller picture. "The terrorists exploited deep institutional failings within our government," authors wrote.

This was not unique to one agency. The FBI conducted investigations around the country but didn't integrate them nationally or share information. The CIA guarded its own efforts. There was "an almost obsessive protection of sources and methods by the NSA."

The report did find fault with the NSA's "focus on foreign intelligence, and its avoidance of anything domestic," and added that "electronic surveillance was not targeted against a domestic threat," but the NSA already had the power to do that. Nowhere in their numerous official recommendations did the authors suggest dramatically increasing the agency's authority to collect information on Americans' electronic lives. Rather, it suggested making better and smarter use of existing authority. There was also an an existing FBI program that swept up electronic information on a large scale.

Could PRISM have stopped 9/11? Maybe; no one can really say either way. But it's just as likely that the attack could have been prevented with existing capabilities that didn't radically expand the government's snooping on American lives.