The most underused actresses in superhero movies

Talented actresses like Amy Adams are wasted in superhero films. We rank them from most to least ill-used 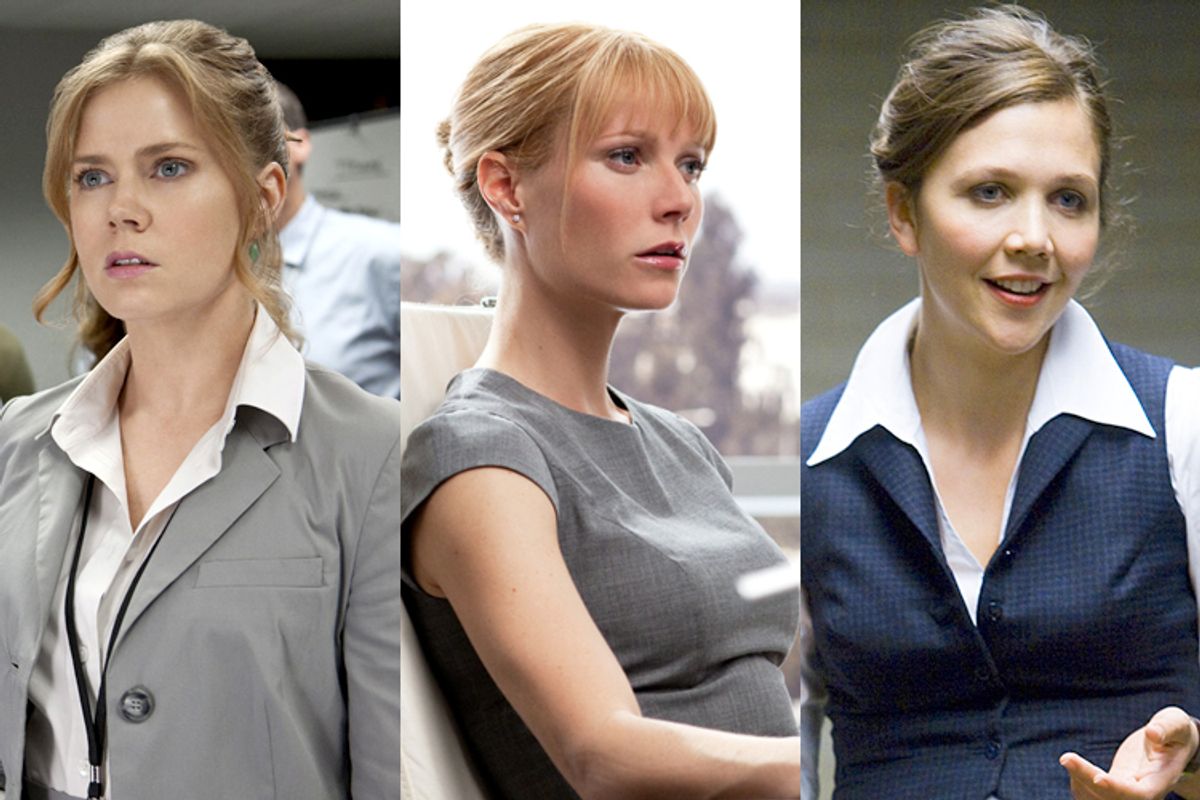 There's plenty of room across the superhero spectrum for superheroes who are eccentric billionaires and ones who are Nietzsche-spouting aliens, those who construct armor in a weapons lab and those who fell to earth from a Nordic-inflected realm in the heavens.

The one thing there isn't much room for is women.

Actresses bedecked with Oscars and prestige regularly dip into the popcorn-movie zone in order to pick up some cash and some of the mass attention that can otherwise elude them. Amy Adams, for instance, has four supporting actress Oscar nominations for movies like "The Master" -- but without a "Man of Steel" on her résumé, can she be confident that a typical moviegoer has even heard of her? But Adams, like so many actresses before her, is entering the comic-book universe to play an anodyne love interest. As Andrew O'Hehir wrote, Adams, "one of the best character actresses in American movies, can’t do much with intrepid reporter Lois Lane, perhaps the most boring of all boring female characters in the boy-centric world of comic books."

Poor Adams! But she shouldn't be surprised. More so even than the "Star Trek" and "Star Wars" franchises -- which at least include a lady in the flight crew -- superhero movies tend to relegate the actresses in the cast to girlfriends or seductresses. Men, evidently, won't go see a movie in which an actress gets much more to do than pout and scream in terror. Even a star who's proven her mettle as a fierce and magnetic actress -- Maggie Gyllenhaal just off "Sherrybaby," for instance -- will usually end up pining away for our hero. We've ranked the most misused actresses in recent memory, starting with utter squandering and ending up at near-appropriate use. As for Adams, we just hope she uses the money from "Man of Steel" to finance six months shooting whatever she wants to do next, far outside the DC Comics universe.

The gifted British actress Rebecca Hall had somewhere between a cameo and a supporting role in the most recent "Iron Man" installment. We're happy to see her in a project higher-wattage than her "Parade's End" role, but wish she had been given more to do while the boys fought it out.

The charismatic Atwell was among the best things in a kind of dirge-y Marvel production -- unsurprising, given that she was also the best thing in prestige-y British projects like "Cassandra's Dream" and "The Line of Beauty." But she gets little more to do than crisply enunciate a few commands, and after Captain America fast-forwards to the present day at the end of the movie, she's seemingly out of the franchise (she's reportedly in the sequel, but it's hard to see how she does much more than appear in flashbacks).

How do you follow up an Oscar win -- and, before that, a decade as the leading light of American independent cinema? By pouting over Bruce Banner in a historic misfire. Poor Jennifer Connelly! When the Hulk franchise was rebooted in 2008, her role was played by Liv Tyler, a sign that the filmmakers didn't really need one of her generation's best actresses in the first place.

Portman, who'd been a very credible lead in comic-book-based action film "V for Vendetta," played second fiddle to Chris Hemsworth in "Thor." Never has an astrophysicist character been so preoccupied with matters of the heart. She's also absent for long stretches during a battle in the skies. The trailer for the sequel, one of Portman's only new films since taking time off post-Oscar, makes it seem as though she'll be perpetually in peril -- a big comedown from blowing up London in "Vendetta."

A role so inconsequential they were able to cast it twice, Rachel Dawes is the only female character of consequence in either of Christopher Nolan's first two Batman movies. Poor Rachel, despite being a hard-charging attorney, can't do very much for herself; in the second film, future Oscar nominee Gyllenhaal gets to be the prize Batman and Harvey Dent fight over.

Cotillard was placed in kind of an impossible position: She's cast as a (spoiler!) femme fatale who has to reveal her evil nature toward the film's end. But while there are many appropriate roles for a great Francophone actress (check her out in "Rust and Bone"!), a Gotham industrialist named Miranda Tate really isn't one, and the lack of screen time prior to her big twist made it feel a bit random.

We're getting warmer. Although she's perpetually imperiled, Dunst got to show flashes of personality in the first round of "Spider-Man" movies (Bryce Dallas Howard, as Gwen Stacy, wasn't so lucky). The franchise leaned hard on the chemistry between Dunst and Tobey Maguire (and, in its current iteration, between Emma Stone and Andrew Garfield).

So she didn't get much to do in "The Avengers" (Portman didn't show up at all!). But Paltrow's career renaissance post-"Iron Man" isn't just because of Goop -- she gets a few heroic moments, especially at the climax of the most recent installment, and she gets to actually be warm and charismatic, rather than wan and lovelorn, Gyllenhaal-style. We'd watch a spinoff with her in it.

It's telling that an actress whose leather-clad body the camera salivates over is considered appropriately used; it's kind of a rough genre for women. But Johansson got a great deal of screen time and an interesting back story in her two Marvel pictures so far, and she didn't have to be anyone's love interest.

A few months before America turned on her, Hathaway provided the only bit of levity in the final installment of the "Batman" trilogy, and made the eventual love affair she got ensnared in seem like the least interesting thing about her character. If she's got any room in her schedule, Hathaway should try to use her newfound pull to get "Wonder Woman" greenlit -- despite all the comic book flicks out there each summer, the iconic female superhero has never had her own movie.