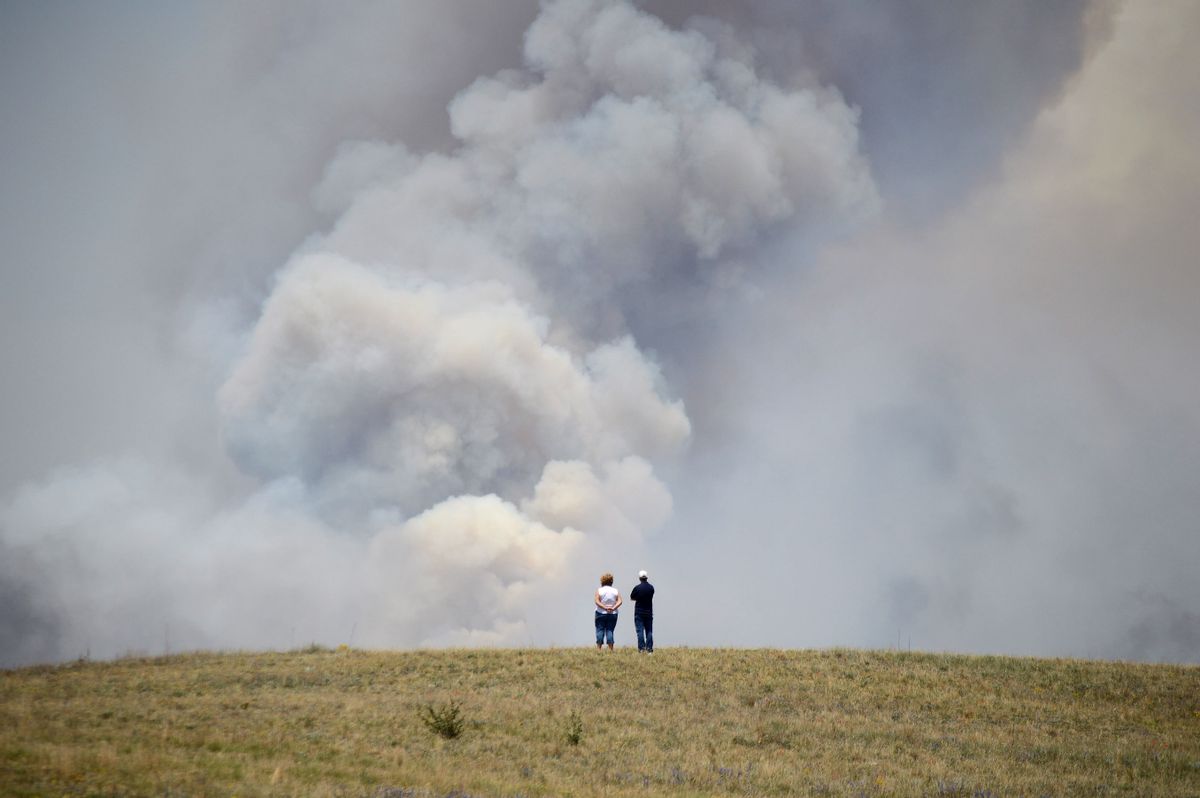 Chris and Christine Walker watch the Black Forest Fire gain steam as it burns out of control for a second straight day near Colorado Springs, Colo. on Wednesday, June 12, 2013. (AP/Bryan Oller)
--

There was no time to grab wedding albums, fingerprint artwork by her 20-month-old daughter, quilts her grandmother made, her family's three cats.

"We left with nothing," she said.

She and her husband later watched on television this week as flames engulfed their house.

"I don't know how to tell you in words what it felt like," she said. "It's the worst thing I've ever felt in my whole life."

Fueled by hot temperatures, changing gusts, and thick, bone-dry forests, the Black Forest Fire has prompted evacuation orders and pre-evacuation notices to between 9,000 and 9,500 people and to about 3,500 homes and businesses, sheriff's officials said.

Part of neighboring Elbert County, including two camps with a total of about 1,250 children and adults, also was evacuated.

A separate Colorado wildfire to the south has destroyed 20 structures, including some in Royal Gorge Bridge & Park, and prompted evacuations of about 250 residents and nearly 1,000 medium-security prison inmates who were taken to other facilities. To the north, another fire burned in Rocky Mountain National Park.

Wildfires also were burning in New Mexico, Oregon and California, where a smokejumper was killed fighting one of dozens of lightning-sparked fires.

On Wednesday, the U.S. Forest Service mobilized a pair of Defense Department cargo planes to help — a step taken only when all of the Forest Service's 12 contracted tankers are in use. At least one was fighting the Black Forest Fire.

No injuries or deaths have been reported, but El Paso County Sheriff Terry Maketa said officials are trying to confirm the whereabouts of one person reported missing.

The area is not far from last summer's Waldo Canyon Fire that destroyed 346 homes and killed two people.

In northeast California, Luke Sheehy was fatally injured this week by part of a falling tree in Modoc National Forest. The 28-year-old from Susanville, Calif., was a member of the Redding-based California Smokejumpers — firefighters who parachute into remote areas from airplanes.

In New Mexico, a wildfire in the steep, narrow canyons of the Pecos Wilderness north of Santa Fe grew to more than 12 square miles Wednesday. Crews planned to build fire lines and clear out fuel miles ahead of the blaze in hopes of protecting communities if the fire heads toward them.

In southwestern New Mexico, firefighters were trying to keep a massive wildfire from reaching an old mining town whose 45 or so residents have been evacuated. That fire was burning in a mountainous area of dense forest.

About 60 miles southwest of Colorado's Black Forest Fire, a 4.5-square-mile wildfire that evacuated Royal Gorge Bridge & Park has destroyed 20 structures, including some in the park.

The Royal Gorge suspension bridge spanning a canyon across the Arkansas River has fire damage to 32 of its 1,292 wooden planks, city officials said. An aerial tram car and tram buildings on either side of the gorge were destroyed, and the tram cable fell into the gorge. An incline railway descending 1,500 feet to the canyon floor was damaged.

Another fire sparked by lightning Monday in Rocky Mountain National Park has grown to an estimated 600 acres in area with trees killed by pine beetles.

Gov. John Hickenlooper has declared disaster emergencies for the Black Forest and Royal Gorge fires and a 60-acre fire in rural Huerfano County, authorizing a combined $10.15 million to help pay for firefighting and other costs.

The cause of the fire near Colorado Springs wasn't clear. The El Paso County sheriff said there were no reports of lightning Tuesday.

At a Wal-Mart and Home Depot parking lot, fire evacuees Greg and Sharon Rambo have set up camp. They had been living in a modular home in Black Forest as they waited to close on a larger house nearby. They believe both have burned.

The couple previously lived in Southern California and were evacuated during a 2004 blaze that hopscotched over their property without damaging it. Since then, they have carried a briefcase filled with medications and important documents, and kept their trailer far from their house so they'd have a place to sleep in the event their home burns down.

Their daughter, who lives nearby, called them Tuesday and urged them to flee. They do not know if her house also burned.

Meanwhile, Coyne said her young daughter has been asking when her family can go home and "see their kitties." She said the family has a place to stay but could use guidance on what to do next.

"What do you do when you've lost everything," she said.