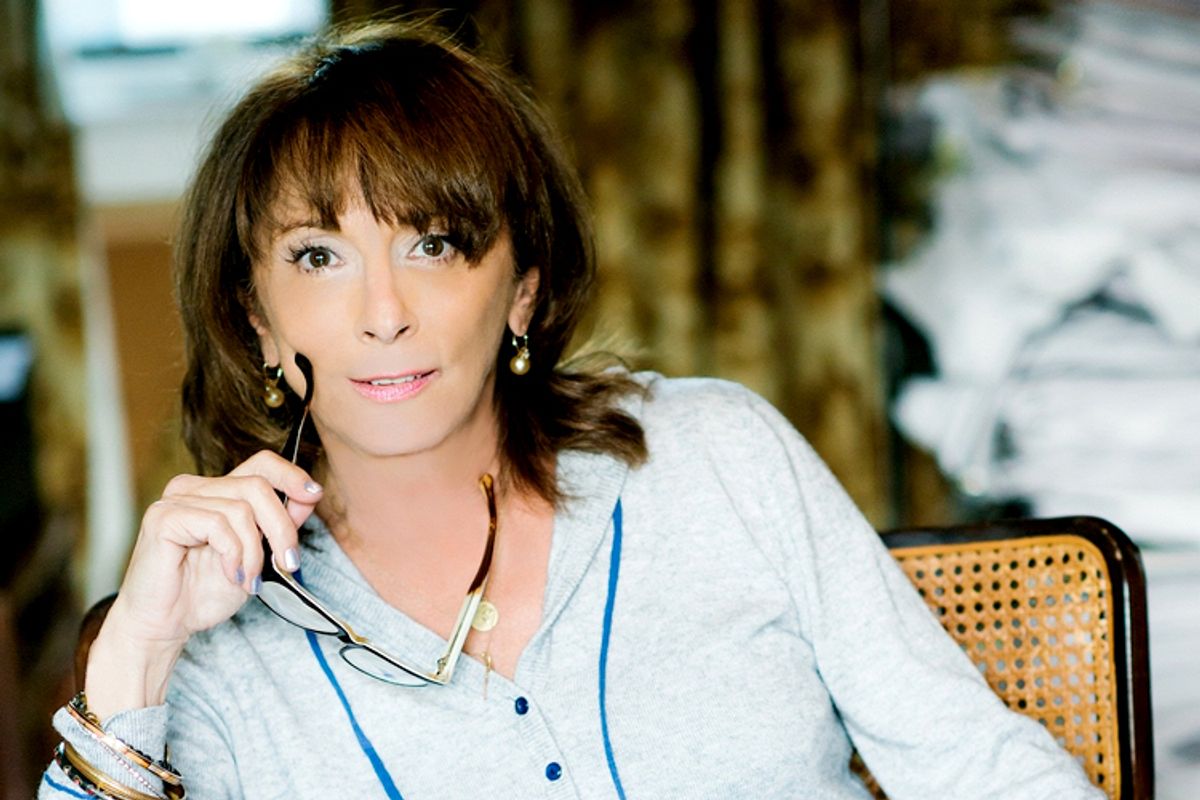 Lynda Obst is a Hollywood survivor -- and she's giving away everything she's learned.

A producer of the romantic comedies "Sleepless in Seattle," "Hope Floats" and "How to Lose a Guy in 10 Days"; the TV Land hit "Hot in Cleveland"; and the genre films "Contact" and "The Siege," Obst was an editor at the New York Times before moving to Hollywood. She's kept up her interest in reporting with a new book, "Sleepless in Hollywood," that seeks to cover the epochal shift in Hollywood away from character-driven films and toward massive sci-fi tentpoles. She places the shift as the product of studio heads thinking far more about the foreign markets than they do about the U.S. audience -- in the entertainment industry, as in so many others, China rules all.

This isn't Obst's first book; a previous memoir, "Hello, He Lied," covered her experiences in Hollywood up until 1996. But "Sleepless in Hollywood" is frank about the fallow period in film that led her to produce her Betty White TV series, and shows just how much more than ever, to quote William Goldman's movie-industry truism, "Nobody knows anything." As she notes, "Bridesmaids" tested horribly -- and we all know how that turned out.

Obst spoke to Salon about life as a female producer, how Nikki Finke has changed Hollywood (for the worse -- but not that much), and how to write about your colleagues without burning bridges. But don't feel too concerned: Her next project is "Interstellar," Christopher Nolan's next big movie.

Has being a woman helped you or hurt you in this job?

Well, I think in the beginning it was harder because I was raising a son and there weren’t that many women around. But I had a lot of fabulous female mentors -- Sherry Lansing [the former head of Paramount Pictures] and Dawn Steel [the late president of Columbia Pictures]. Women helped each other in the beginning. And I think women make wonderful producers, because they’re very nurturing, but at the same time, they feel things more. In this business, that’s not necessarily a great thing, because you have to always say “Next.” We tend to internalize things, so that’s not good. I think in the long run it’s not a bad business for women.

It’s not Wall Street. Creative instincts are rewarded. We have great women studio heads and role models and networking organizations. You can have a meeting with five women in it. There’s not a lot of businesses you can say that about.

What did you make of the Hollywood Reporter's assertion that older actresses are now holding all the cards? Did it feel like a victory or somewhat conditional?

What’d I say? They like stars of the immediate past. They know Sandra Bullock. They know Angelina Jolie. They know Meryl Streep. They know Jennifer Aniston. Everything with the international audience is pre-awareness. The know the “Ice Age” franchise. They now know “The Hangover,” which is why it’s going to do better abroad than domestically.

The reason you see so many sequels is because you can’t afford to market remotely. You can only afford to give them a title they already know. “Ice Age” would go up incrementally domestically but logarithmically internationally. There’s a property that means almost nothing domestically and is among the most valuable internationally. It also goes for actors -- Liam Neeson, Bruce Willis. It’s why Denzel [Washington], who I couldn’t sell abroad when I did “The Siege,” is now huge overseas.

Will Smith will probably get forgiven after the flop that was "After Earth."

But it’ll do better overseas. They’ll make their money back overseas.

The Oscar-winning producer Julia Phillips got in a lot of trouble for her tell-all memoir. You burn many fewer bridges in "Sleepless in Hollywood" -- was that purposeful?

Well, when I started writing about the business -- even before “Hello, He Lied,” I wrote an article for [the editor] Harold Hayes about the ontology of the pitch. I’d been trained at the Times, so I was very careful when I began writing to develop a voice that was kind of anthropological because I knew I couldn’t be a reporter, as I was a participant in the business. I had these kind of overweening New York Times ethics that I took to the beginning of my writing. I didn’t even think that I could, but Harold Hayes worked with me on it. He was kind of this legendary editor originally from Esquire but then he went to the progenitor of Los Angeles magazine.

So I did kind of meta-writing. Everyone was an exec, or a writer -- they went by their role. I wrote about the business in the abstract. Then, when I worked on “Hello,” I stayed in that voice. I wrote a bunch of magazine articles, for Harper’s, Premiere, before I wrote “Hello,” and it was easy for me to continue that meta, anthropological point-of-view. People were kind of appalled that I thought I could do it, but I was very confident, having been so trained, that I could stay clean of my own agendas and my own axes to grind, because it just wouldn’t work.

“Hello” was a survival guide, and it was about me, and if I wrote about specific incidents, people were abstracted into a job. They were a studio head, they were a writer. If people didn’t like it, they didn’t tell me. I only got the good stuff. I read some hating stuff and they seemed just like people that hated me. You can’t do anything about that! You’re going to have some haters if you do what I do.

This book is a teeny bit different, because I presumed to do more reporting than I’d done before. I tried to do reporting without being a reporter. I couldn’t be complete, I couldn’t talk to people I didn’t know, people I wanted to work with but didn’t ever work with, people who could advantage me -- I only talked to people that were really good friends, that would talk to me in an intimate way that they didn’t talk to reporters, so that it maintained an intimate tone and encompassed a narrative of trying to figure out what the hell was going on.

And yet for someone without a clue what was going on, you're now producing the next Christopher Nolan movie, "Interstellar."

I’ve always been drawn to sci-fi. “Contact” was one of the first projects I started when I got out here because Carl Sagan was here doing “Cosmos.” I was at my first job, wearing a crinoline leopard-print skirt, with no idea what I was doing, and I used to hang out with Carl at his adorable house while he was doing “Cosmos,” and that was the origin of “Contact.” It only took 12 years. My tentpoles tend to take a really long time. It’s not a departure to work on a science-fiction film -- I’m just a geek who loves romantic comedies.

It's interesting -- there are zero studio romantic comedies coming out this summer. It feels like the genre's been abandoned.

There are some in the works for the following year. The studios haven’t completely abandoned them; the press’s announcement of the death of the genre is premature. They’re cyclical and they have to be reinvented with time. I know of a few in development, and there are too many great female writers. I think actors went through a period where they didn’t want to do conventional ones. A few of them were badly written and badly cast, and badly written and badly cast films in any genre aren’t going to work. Even ones that weren’t so great of the immediate period before did well, like the ones with Mila and Ashton and Natalie Portman and Justin [“Friends With Benefits” and “No Strings Attached”]. I think “Silver Linings Playbook” showed a clue to the genre’s future.

Romantic comedies have to reflect the era. We’re in a chaotic, emotionally confused era, and we don’t want neat, glossy romantic comedies. So the ones of the ‘80s and ‘90s are not the right ones for now. You can’t do the same thing over and over and expect the audience to go because they’re stupid. The audience is smart.

Do the studios have contempt for the audience?

I don’t think that’s what studio heads think. I think studio heads think, “Oh my God, 80 percent of the audience is now international. Romantic comedies don’t travel.” And that’s the reason they don’t get made. But they still are a very good economic model for a smaller level of profitability. If they’re going to do interstitial movies between their tentpoles, they have to get them exactly right, which is harder, cast them exactly right, which is even harder, and that takes thinking, and different thinking than casting tentpoles and franchises. Right now they’re casting for international audiences.

It feels like no new stars -- except probably Jennifer Lawrence and maybe Kristen Stewart -- have broken out in the last five years. Is Hollywood running on fumes; is the star system over?

The domestic audience likes breaking stars, and the international audience likes established stars, even from the immediate past. And that’s one of the reasons you see the breakdown between romantic comedies being made and all of the tentpoles that are getting made. They’re different business models, and they’re not making many movies for a domestic audience. How are they going to divide their resources? Are they going to make one extra $200 million movie that may or may not work? Or break that into smaller movies with a chance for marketability and cost less to market?

In yet another summer defined by sequels, are there any original success stories that make you happy you work in this town?

I’ll give you a successful sequel -- and that’s “Fast and Furious,” which gets better with each installment. And then there are the successful one-offs, right? We see them at Oscar time each year. “Argo,” “The Social Network,” “Black Swan,” an Alexander Payne movie I just saw called “Nebraska” [to be released this November], that made me want to stay in the business for the next 30 years. You see it in “Silver Linings Playbook,” which made $135 million. David O. Russell can now do whatever he wants, and that’s wonderful. But these are the Olympians. They’re in a class by themselves, and the camera’s been taken away from the middle class and given to babies with iPhones.

With all the talk about Deadline and Nikki Finke -- the hard-charging journalist who either is or is not fired -- do you think aggressive Internet coverage of the industry has hurt it?

Well, it doesn’t help it! [laughs] It was always over-covered. I remember getting calls from the Los Angeles Times -- and I would ask, “Is this the Pentagon Papers?” I came from news. Covering this town like it was life and death always seemed insane to me.

That helps explain why your book has such a light tone.

I have to find it funny or I can’t go on. And that’s one of the reasons I write. So many people around here don’t read the newspaper. They only read the trades -- or Deadline -- about one another, and they have no perspective on the world. The world, and space, is where I get my ideas.