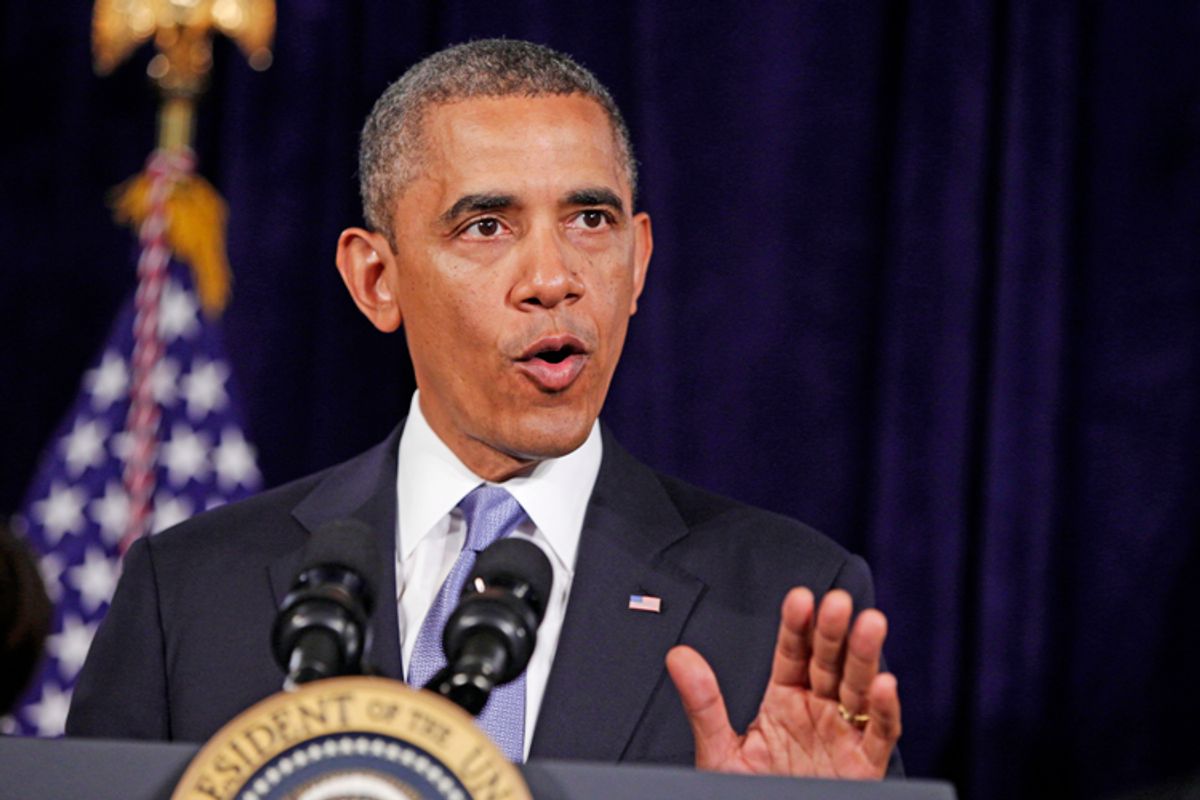 WASHINGTON (AP) — President Barack Obama's decision to authorize lethal aid to Syrian rebels marks a deepening of U.S. involvement in the two-year civil war. But U.S. officials are still grappling with what type and how much weaponry to send the opposition forces and how to ensure it stays out of the hands of extremists battling for control of Syria.

While a small percentage of the 93,000 people reportedly killed in Syria are said to have died from chemical weapons — U.S. intelligence puts the number at 100 to 150 — the White House views the deployment of the deadly agents as a flouting of international norms. Ben Rhodes, Obama's deputy national security adviser, said the multiple chemical weapons attacks gave greater urgency to the situation.

"Suffice it to say this is going to be different in both scope and scale in terms of what we are providing," Rhodes said of the ramped-up U.S. response. But he added that the U.S. would make specific determinations "on our own timeline."

The Obama administration could give the rebels a range of weapons, including small arms, assault rifles, shoulder-fired rocket-propelled grenades and other anti-tank missiles. The opposition forces could operate most of that equipment without significant training.

Obama's opposition to sending American troops into Syria makes it less likely the U.S. will provide sophisticated arms or anti-aircraft weapons that would require large-scale training. Administration officials are also worried about high-powered weapons ending up in the hands of terrorist groups. Hezbollah fighters are among those backing Assad's armed forces, and al-Qaida-linked extremists back the rebellion.

The CIA and special operations trainers are already running some weapons training programs for the rebels and are expected to take charge of teaching the opposition how to use the weapons the U.S. has agreed to supply, another U.S. official said.

There is also some debate within the administration about who would provide the lethal aid and how it might be delivered, the U.S. officials said.

All the officials insisted on anonymity to discuss internal administration discussions.

Obama has resisted arming the rebels until now, a cautious approach that underscores the deep divisions within his administration. The proponents of more aggressive action, including Secretary of State John Kerry, appeared to have won out over those wary of sending weapons and ammunition into the war zone.

The U.S. has made no decision on operating a no-fly zone over Syria, Rhodes said.

The U.S. has so far provided the Syrian rebel army with rations and medical supplies. The administration has also agreed in principle to provide body armor and other equipment such as night-vision goggles to the rebels, although the Pentagon has said there has been no movement on that as yet.

Word of the stepped-up assistance followed new U.S. intelligence assessments showing that Assad has used chemical weapons, including sarin, on a small scale multiple times in the last year, killing an estimated 100 to 150 people.

The administration announced in April that it had "varying degrees of confidence" that sarin had been used in Syria. But they said at the time that they had not been able to determine who was responsible for deploying the gas.

The more conclusive findings announced Thursday were aided by evidence sent to the United States by France, which, along with Britain, has announced it had determined that Assad's government had used chemical weapons.

In Brussels, NATO Secretary-General Anders Fogh Rasmussen said Friday, "The international community has made clear that any use of chemical weapons is completely unacceptable and a clear breach of international law."

He said he welcomes the "clear U.S. statement" and called on Syria to "grant access to the United Nations to investigate all reports of chemical weapons use."

Obama has said repeatedly that the use of chemical weapons would cross a "red line" and constitute a "game changer" for U.S. policy on Syria, which until now has focused entirely on providing the opposition with nonlethal assistance and humanitarian aid.

The White House said it had notified Congress, the United Nations and key international allies about the new U.S. chemical weapons determination. Obama will discuss the assessments, along with broader problems in Syria, during the summit of eight leading industrial nations next week in Northern Ireland.

Among those in attendance will be Russian President Vladimir Putin, one of Assad's most powerful backers. Obama and Putin will hold a one-on-one meeting on the sidelines of the summit, and the U.S. leader is expected to press his Russian counterpart to drop his political and military support for the Syrian government.

The Syrian fighters have been clamoring for bolder Western intervention, particularly given the estimated 5,000 Hezbollah guerrillas propping up Assad's forces. Assad's stunning military success last week at Qusair, near the Lebanese border, and preparations for offensives against Homs and Aleppo have made the matter more urgent.

Rep. Ed Royce, R-Calif., the chairman of the House Foreign Affairs Committee, said he supported the president's decision "to expand assistance for the vetted Syrian opposition." But other lawmakers expressed reservations, including Sen. Chris Murphy, D-Conn., a member of the Senate Foreign Relations Committee.