The most ridiculous depictions of the Internet in movies and TV

From "The Bling Ring" to "Veep" to "House of Cards," a look at the silliest depictions of digital culture 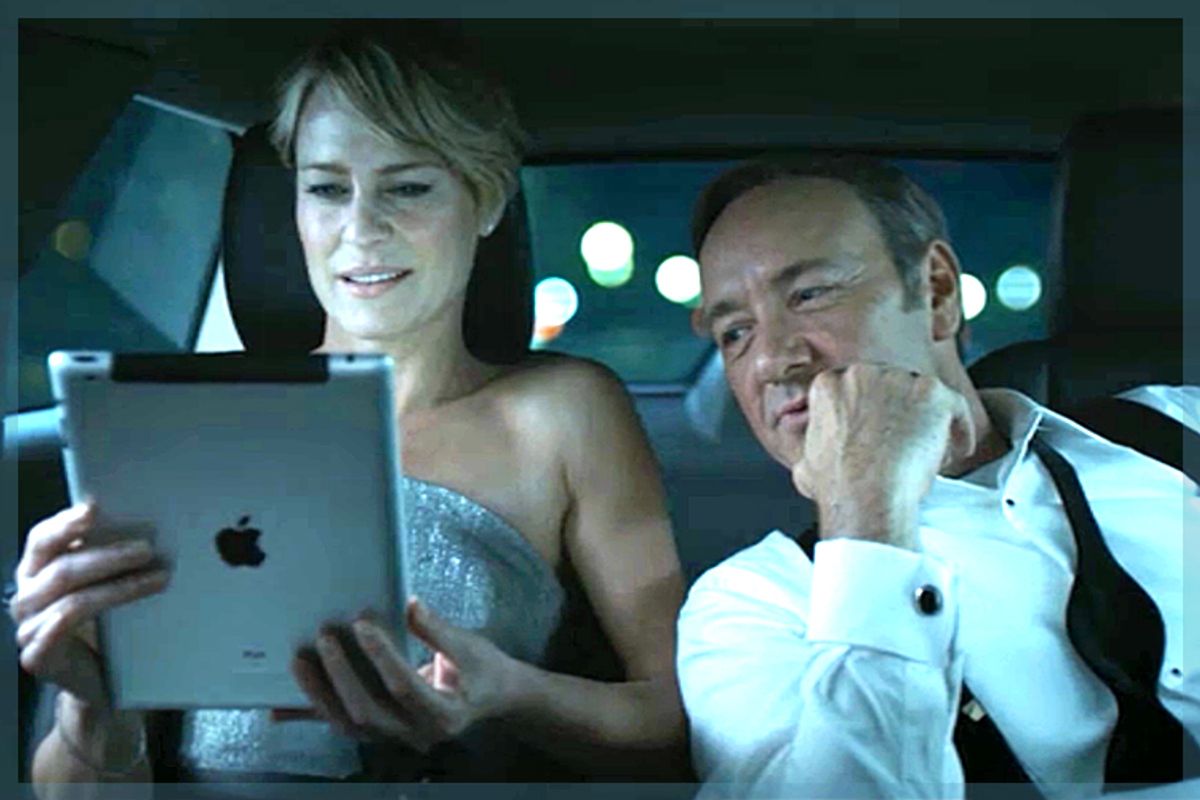 "The Bling Ring," which adapts the true story of teens robbing celebrity homes, opens today, but there's one element that jumps out as off-key.

The members of the ring use the Internet in order to locate celebrity addresses -- in particular, a fake version of Google. That in and of itself isn't so novel: Because of copyright issues for pretty much every film other than Google infomercial "The Internship," many works of entertainment use fake search engines (one popular one across many TV shows is "Finder-Spyder"). But the teens encounter gossip blog posts that very plainly state where in the world celebrities will be going, with no shades of meaning. Even at the height of her fame, Paris Hilton wasn't likely to get a Dlisted item stating in its headline what country she would be visiting in the near future, and those blogs barely post anything without a pun or some kind of wordplay. It felt as though no one involved had ever read a celebrity gossip blog. (In most contexts, that's something to be proud of.)

For a film whose depiction of selfie culture on Facebook seemed so otherwise on point, this simplification of the Bling Ring's research into celebrity whereabouts was surprising. But while "The Bling Ring" gets it mostly right, many recent entertainments miss the mark wildly. (To be fair, some, like "30 Rock's" "Joan of Snark" episode or "Enlightened's" depiction of Twitter narcissism, are uproariously on-the-mark.) Here are some of the silliest recent depictions of the Web in entertainment.

As has been noted across the Internet, Zoe's cavernous office at "Slugline" is fairly ludicrous -- even the most untrammeled Web journalists tend to sit in open-plan bullpens, not beanbag chairs pitched against the floor under odd modern art displays. And the idea that a website with the power of Politico would devote its resources to unraveling the story of an education bill seems a bit shaky.

The series posits that there's an entire sub-Internet devoted to making fun of the vice-president. Sure, Joe Biden's popular on the Onion, but that's because he's so amiable! When Selina Meyer sings a lengthy, jokey song at a charity dinner, it becomes a "meme" on Tumblr -- but it's hard to imagine any of that site's teen users sitting through a four-minute video in which an elected official mildly missteps vis-à-vis diplomatic relationships.

So much on "Girls" is so right! But why does Hannah have to go into a website's office to interview with them as a one-off freelance writer? No one at JazzHate has that much time. And it's probably for the best her e-book deal seems to have fallen through -- a deal like that likely wouldn't go to an aspiring author without a couple hundred confessional blog posts under her belt. Not that Ms. Horvath wouldn't eventually get to where she wants, but things are moving fast: Didn't she have 26 Twitter followers a year ago?

"Temptation: Confessions of a Marriage Counselor"

A social-media entrepreneur who is every bit as wealthy and well-known as Mark Zuckerberg and whose product is meaningfully different from Facebook in the following ways -- none -- decides to invest not in a start-up but in a boutique matchmaking agency (?) where he devotes vast amounts of time to seducing a therapist but also secretly has AIDS. Hard to believe that no element of this would have been picked up by the ravenous tech-journalist community -- but then again, this social-media guru is spending all his time outside Silicon Valley, in Washington, D.C. OK!

Not worth getting into everything here -- but the entire premise is that Google is willing to hire two washed-up, 40-something watch salesmen as interns. Sure, Google's an unorthodox place, but it's still hard to believe an Owen Wilson character would thrive there, let alone convince his co-workers to lighten up and have more fun.

This indie film about the disasters the Internet has wreaked on American life hinged on anonymous chat rooms where sex talk and identity theft runs rampant! You just can't go into an anonymous sex chat room without having your credit card number stolen! Sobering stuff. "Do you visit chat rooms, message boards?" asks a detective of a bored housewife -- and unless he's talking about Reddit, the "message board" as concept is over, and the "chat room" felt dated when it was a plot device in 2004's "Closer."

In this 2010 sequel, Carey Mulligan plays a high-powered blogger -- shades of "House of Cards"! But we knew less about the Internet three years ago, it seems, and Mulligan, as documented in this very funny roundup of the movie's errata, looks over her blog posts by printing them out and gazing at them. Maybe her eyes were irritated by the screen's glare, but going paper-free seems the very point of blogging.

Aside from an early scene in which the Spring Breakers, still at school, sit on computers in a darkened lecture hall as a PowerPoint plays, there's next-to-no internet use at all in either the millennials-gone-wild dark fantasy or the millennials-adrift saga. Do these films' respective directors really think that a group of materialistic teens on a crime spree, or an aspiring dancer in New York with nothing but free time, wouldn't be haunting Instagram? Then again, given how easy it is for one false note to stick out, maybe it's for the best that these movies stayed offline.