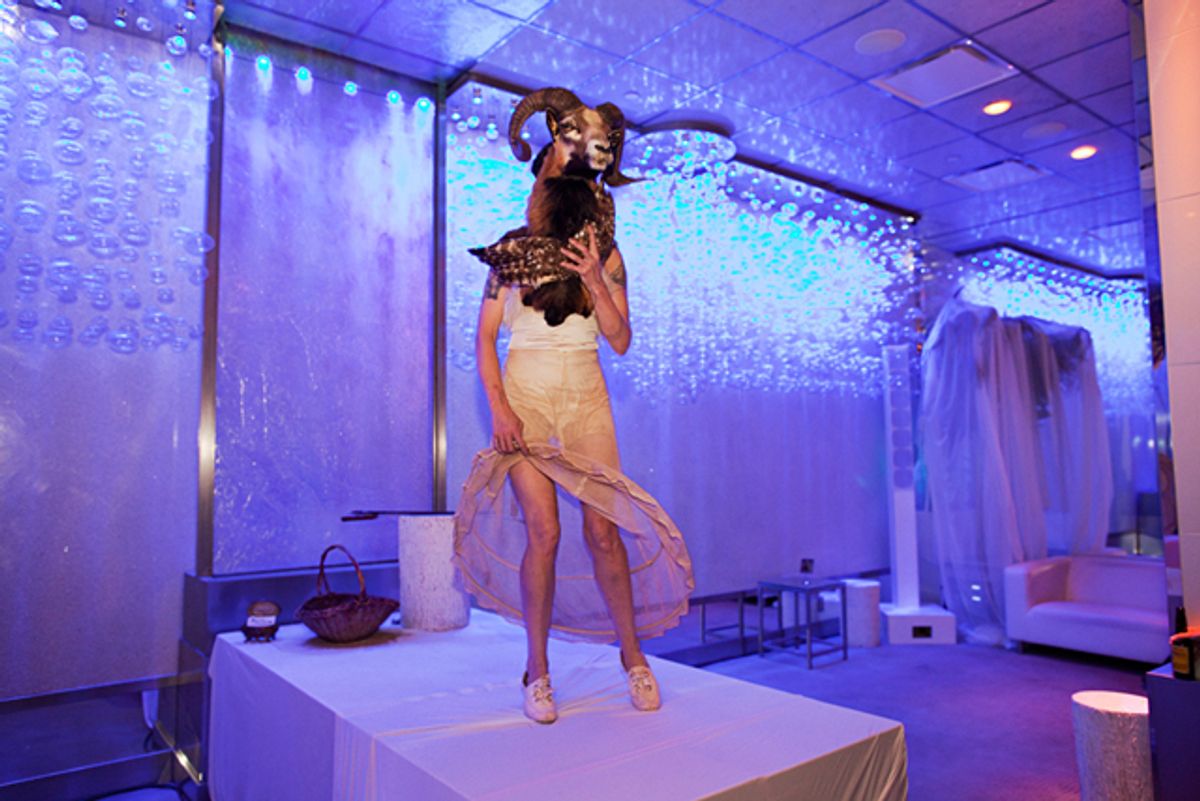 Last week when I found myself in Times Square late in the evening hours, there was a man in a perfectly pressed suit, sitting in chair before the TKTS booth staring intently into space. There was a girl in glittery underwear and bunny ears hopping around a construction area for tips. There was the golden off-the-clock mime asking for a cigarette from a businessman who had also just left the office. In other words, at any hour in Times Square, especially in the evening, has some seedy tone of surreality. Similarly, this week’s Times Square After Hours program, called Cabin Fever: An Alpine Fantasy, was a performance event with its own more elevated touches of the surreal, most notably a human/taxidermy collaboration.

In terms of my personal interest quadrants, taxidermy, saw playing, and otherworldly performance art fall right in the center. In the side room of the Aspen Social Club, decorated to be the icy contrast to the more woodsy main bar area, Ryder & Hazel performed for the entirety of the evening. Ryder (the artist, Ryder Cooley), and Hazel, a taxidermy sheep head, danced with severed bird wings against an ambient soundscape by the Drums, stepped in a basket of dirt, played the saw, and gave a continuous animalistic spectacle that was mesmerizing, if a little static (I would have loved to hear some of their music, or for some interaction with the crowd). Nevertheless, people sprawled on the floor and took plenty of photographs, as the visual was pretty awesome.

Then there was Kimisin Kreft who sang in front of a series of projections, although I wasn’t able to get very close due to the space being rather small. It’s too bad that Kreft and Cooley didn’t share the stage for more of the performance, maybe just because I would have loved to see the silhouette of the sheep’s horns against the shifting projections with the dancey music. Instead it was more of a collision of experiences, which is sort of like the space itself, and the crowd.

Up front at the bar, a slam dunk competition was playing on one TV, hockey on the other, and a surfing movie on another wall. The art worlders, wandering tourists, and some of the regulars (one of whom was really adamant in trying to buy me a drink and start a conversation based on the outrageous nature of the taxidermy which, you don’t know me at all, man), wandered through the space that felt much more on the sleek than seedy side, but still had some of that Times Square aesthetic, a need to make a sense of hyperspace within the cityscape.