Can a show about murdering women actually be feminist?

On TV, we seem to find violence against women endlessly entertaining -- but "The Fall" challenges us to do better 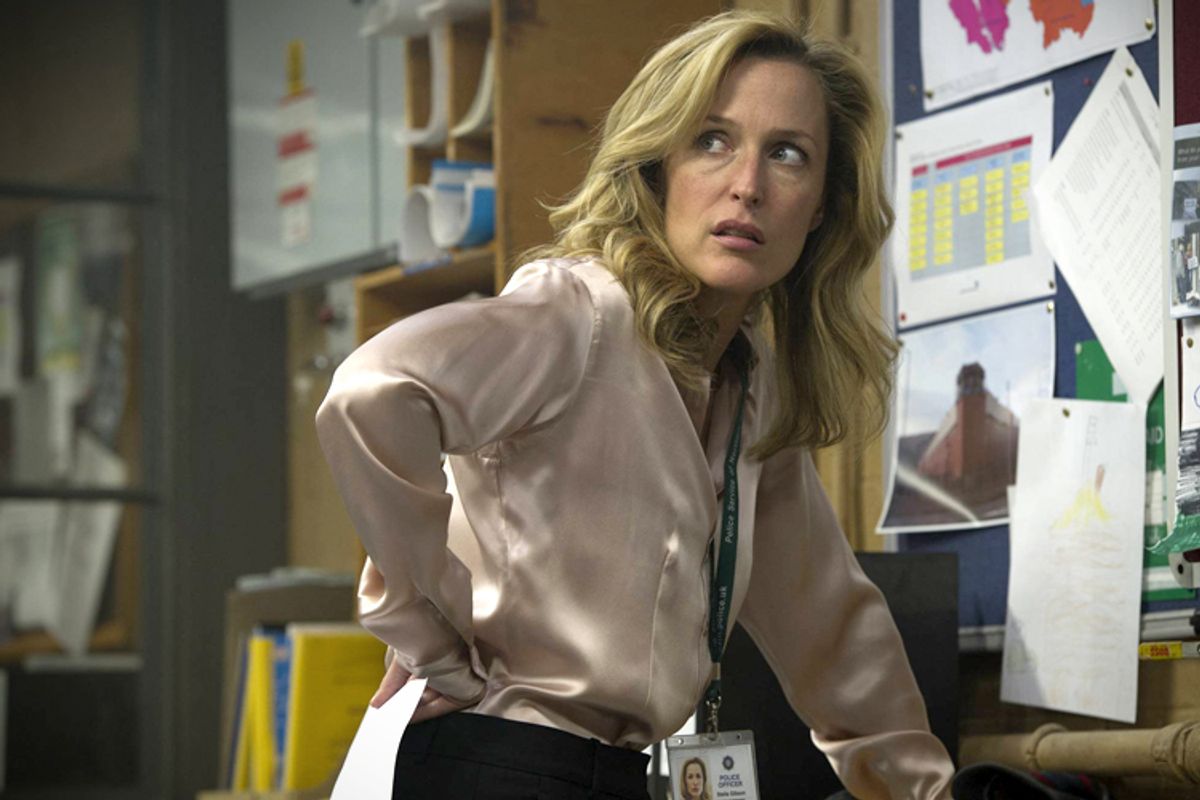 Gillian Anderson in "The Fall"
--

The endless parade of serial-killer dramas on TV today raises an uncomfortable question: What does it mean that we as a society seem to find violence against women endlessly entertaining? "The Fall," a BBC2 series now streaming on Netflix, forces us to take a hard look at ourselves as viewers and what we like -- and makes the powerful point that killers who target women aren't as deep or interesting as other shows make them seem.

At first glance, the show might look like "Law & Order: SVU," or pretty much any murder series of the last decade. A man, a grief counselor, married with two adorable kids, cannot control his urges to hurt and control women. We don’t know much of his background, or his past crimes, but we come upon him in the beginning of a killing spree in which he stylizes the dead body. The police try to track him down with the help of a super-detective, one devoted solely to the job, so much so that she sleeps at work.

What makes this show uniquely feminist is the way it handles this seemingly familiar subject matter. It showcases the electric talent of a top-tier actor (Gillian Anderson) as a complex and brilliant detective solving gruesome crimes against women. It focuses on the explosive relationships between men and women, on misogyny, on the nature of violence, and it deeply cares about women, feminism and the ways in which men mistreat women, from petty judgments to torture, rape and murder.

The show is not subtle in its embrace of feminist themes. It purposefully paints male characters as both limited and flat. The hollow men, the stupid men who think largely with their cocks, the men who delude themselves into thinking that somehow they are worth more or are just better than women, are shown not as fully sympathetic human beings, but as dumb, or violent, or impetuous men. Though the serial killer on the show is indeed a male, he is a cipher with no real inner life. He is one-dimensional, and purposefully so. Anderson herself tells us so in the final speech of the season, a stunner, in which she explains to the serial killer in an indignant, but almost triumphant declaration:

You are a slave to your desires, you have no control at all, you are weak, impotent, you think you are some kind of artist, but you are not... you try to dignify what you do, but it’s just misogyny, age-old male violence against women.

The show itself and this final statement carry an extra layer, a statement about society but also about the state of TV. Of course we are different than an actual serial killer, but in a sense, we aren’t, because both our culture and serial killers find something interesting and engrossing about violence toward women, when in fact, there is nothing redeeming about it at all.

Yet, the show then runs into the same problem it creates for viewers. This argument forces the viewer to ask: If violence against women is nothing more than violence, plain and simple, then why is it at the center of this show? Isn’t it a bit hypocritical to send this message while entertaining us with violence against women?

The show also places the violence only on the periphery. Think of this in terms of sheer time allotted. In the serial-killer drama "Dexter," we never know or see or understand Dexter's girlfriend and eventual wife, Rita, outside of the context of Dexter himself. When she is killed, gruesomely, though in a heavily stylized and imagistic manner as revenge against Dexter, we tend to mourn her for the good she brought to Dexter’s life. But "The Fall" goes out of its way to take a different tack. One of the most intriguing and important elements of the show is where the camera goes when not focused on the murders. It goes straight to the women. For example, in an elegiac, intimate, wrenching scene, the wife of the serial killer, an NICU nurse, stays with an 18-year old mother to watch as her premature baby dies. As a character, the wife is much more interesting than the frightening but flat killer.

In the same vein, the show brings up countless grisly detective show tropes, only to explicitly shatter them.  For instance, in his last scene with Gibson, the serial killer says that he and she are very similar, and by now we know exactly what we are supposed to think. The writing itself points you to the comparisons throughout the season, and Gibson admits as much at one point in conversation with a friend. But in their final conversation, we end up seeing the artistic trope of comparing killer and detective as false, misleading and simplistic. A woman who hunts down serial killers who rape and murder women is truly nothing like the male serial killer, regardless of the allure of the comparison.

All of which amounts to one of the essential statements of "The Fall": There is nothing beautiful or glamorous or redemptive or artistic about violence toward women. There is nothing to understand, no deep-seated secret to uncover about the darkness of man (again, Dexter with his “Dark Passenger” is the first example that comes to mind). Violence against women is plain, prosaic, as old as time, and simple. It is a cowardly act by savage, pathetic men and needs to be stopped. That is all. In a climate where rape jokes are constant, where women don’t get included on discussions of how to stop sexual violence in the military, and where some men still think they know better about the decisions women can and should make, we need shows like this more than ever. "The Fall" reminds us that the lives of women will always be more interesting than the violence others commit against them.

Joe Winkler is a staff writer for Vol.1Brooklyn, and a contributor to theRumpus.net, HtmlGiant, and Tablet Magazine, among other online publications. You can follow him on Twitter @JosephWinkler.