Confessions of a Playgirl editor 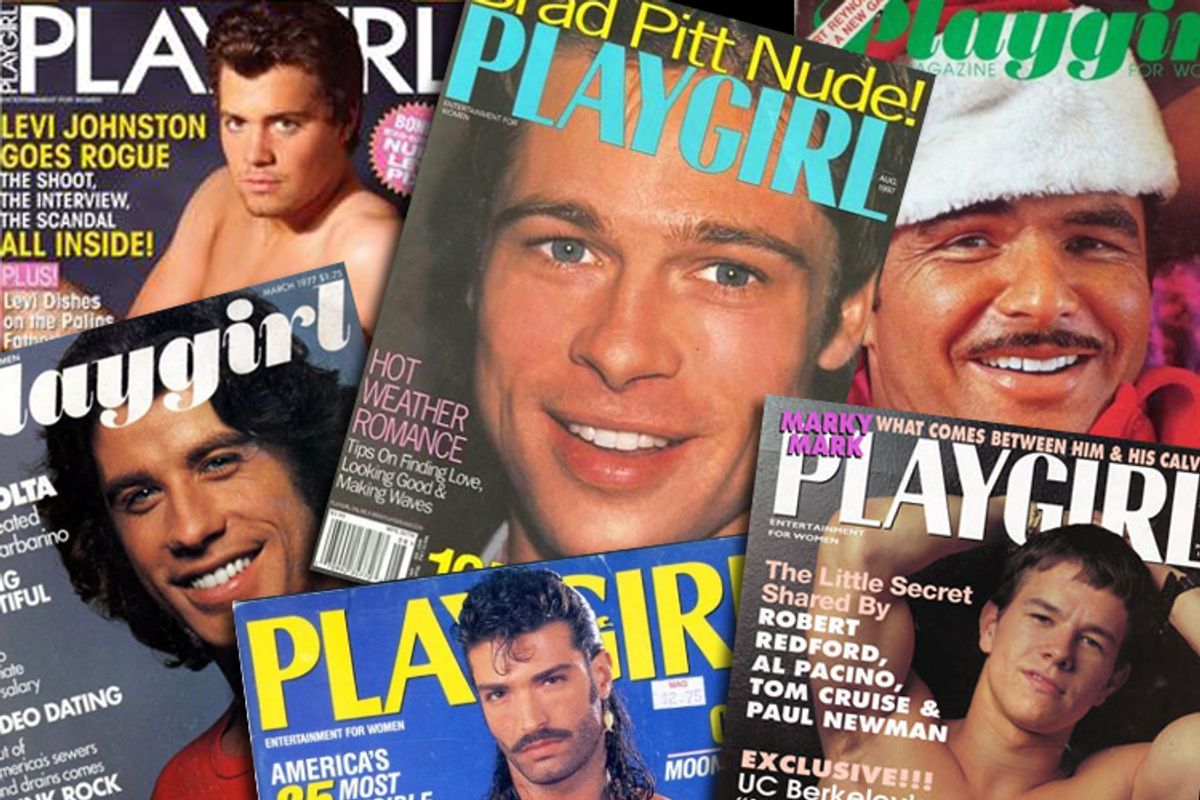 Blue vein meatroll, liver turner and purple-helmeted warrior of love. These were just a few of the words on the "13-page thesaurus of synonyms for penis" that Jessanne Collins collected as an editor at Playgirl magazine, which now only exists as an online brand and rare print publication. In her new e-book, "How to Be a Playgirl," a bite-sized memoir of her time at the nudie mag, she writes, "Who were these people, who were turned on by words like tickle gizzard?"

Turns out the editors of the much-ridiculed magazine were often asking themselves the same questions as the general public: Who reads this?

Those "tickle gizzard" fans -- "the wankership," as she puts it -- would flood her desk with letters. "Frequently, the handwriting on the envelopes [was] what one might call 'serial killer,'" she writes. "Just as frequently, it was heart-inflected in the manner of a giddy teenager. Sometimes the pages were tacky or crumby with substances better not wondered about." The mail was "totally creepy, a little bit heartwarming, and super tragic," she says. "Always, it made me need to immediately wash my hands." Among those were the often bizarre submissions from everyday men who wanted to appear in the magazine. She remembers one that read, "'I would like to pose in your prestigious magazine as a lumberjack and beside a nest of hornets."

The book doesn't just dish on the inner workings of the infamous publication, though. It's also an earnest and insightful look at sexuality and female desire in particular. "Desire ... is something that takes real work to sell," she writes. "Its shape is impossible to trace, its lines invisible. It's built out of thin air, on anticipation and possibility. It lives between seduction and the tease, in every step it takes to identify what it is we don’t have yet and every step it takes to make it ours. It's bordered by those invisible lines we draw, and then erase and draw again."

How was it that you, with your "expensive liberal arts degree," as you put it, with capital-"s"-serious journalistic aspirations, ended up an editor at Playgirl?

I'm sure a lot of people have this experience at a lot of moments in history, but my story is that I grew up being a good student and doing all the things good students are taught to do in order to become a competent and competitive professional in some field someday. I loved print media. Or as we called it back then, just media. Ha. So I studied the industry and I did my internships, and all that. And then right as I was graduating and starting to look for work, the industry -- the world, really -- kind of changed. It was 2001. I went earnestly out in the world to go get the job I thought was out there waiting for me, and it just wasn't.

So the short story is I waffled around for a lot of years, doing a lot of things, working in retail, in book publishing, going back to school. But I was still vaguely dreaming of and aiming for a job at a magazine, even though I recognized that the rules were not what I thought they were and I basically had no idea how to do that. And when I ended up making a connection at Playgirl, I just saw it as finally, an open door, after all those years of having no access points. Granted, it was not the door I'd been looking for! So, in both a personal way and kind of an industry way, the story I tell is about what happens when things are in flux, or when they don't go according to your best laid plans. How do you adapt? How do your priorities, your expectations, your values change?

Why were Playgirl's publishers so set on presenting the magazine as "for women" when it obviously had a large gay male following?

How did the magazine change over the decades?

In the seventies and eighties, it really did emulate Playboy, which had its famously serious articles, and it did so pretty successfully in my view. And of course it had all of the amazingly mustachioed men with the big seventies hair -- the Burt Reynoldses and the like. You can just see in those old issues that it really was a pretty mainstream endeavor. The ads are all for Virginia Slims and Baby Soft and cosmetic type products, that are so safe and familiar. So it had this mainstream female appeal, but, of course, uh, there were a lot of penises. It really was quite a revolutionary mix!

Why do you think it ultimately failed?

Did you ever witness a Playgirl shoot that you found legitimately sexy?

Honestly, no. I mean, maybe this is another sign that I was very much a fish out of water, but I just did not at all get the aesthetic. I don't buy the myth that women are "not visual" people whatsoever. I check out dudes. I know we all have specific aesthetic triggers. And yet in all those pages upon pages of photos -- none of them did it for me. There was an almost clinical approach to photography -- almost as if these bodies were specimens under a microscope, every muscle all waxed and on display -- and I think that's the major thing. It's this certain type of porn trope that doesn't translate well for a real female audience.

You write about the masses of reader mail that you would receive at the magazine. Did you learn anything about female, or male, sexuality from those missives?

I learned that it's an incredibly diverse world. I learned, for better or for worse, to see sexuality in almost everything. I stopped thinking that anything was freaky! And, of course, I learned that women are most definitely turned on by visual things.

It sounds like there might be a lot of competition for this, but what was the weirdest reader letter you received?