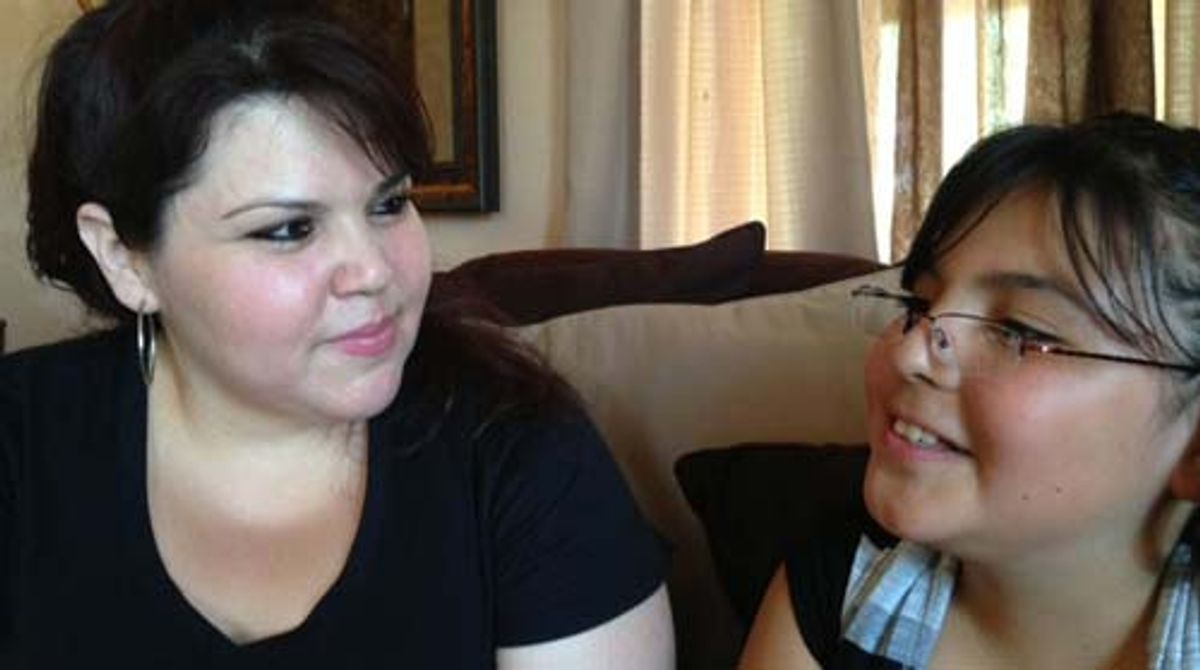 PHOENIX – Luz Ruiz Rascón noticed the signs as she stepped into her home. Missing lampshades, grease in the kitchen, papers everywhere. Tiny details that any other time would have caused her to admonish her children.

“They missed me. They needed me to be here,” she said.

Rascón was returning home after nine months and 12 days in jail. She was arrested last year in a worksite raid and charged with several counts of identity theft for allegedly working with false documents.

A felony conviction would have made her ineligible for legalization should Congress pass federal immigration reform in the future. Identity theft is also considered a crime of “moral turpitude,” a deportable offense.

But after fighting the charges in court, Rascón was victorious in getting the Maricopa County Attorney’s Office to drop the felony charges.

Her case is among a handful of cases being fought by a team of attorneys who are challenging the legality of a controversial practice in Arizona: charging undocumented immigrants as felons for identity theft.

While many immigrants enter a guilty plea, unaware of the immigration consequences, Rascón decided to fight the case in court – even though this meant spending months in jail. As an undocumented immigrant in Arizona, she didn’t have the right to bail, under the state law known as Proposition 100.

But her success in court could give hope to other undocumented immigrants who are charged as felons.

Hundreds of immigrants charged as felons

In recent years, the Maricopa County Attorney’s Office (MCAO) has charged hundreds of undocumented immigrants with felonies for identity theft. The vast majority of these cases don’t go to trial.

About 500 of the cases come to MCAO as a result of an immigration crackdown on workers by the office of Maricopa County Sheriff Joe Arpaio, who was recently found by a federal judge to be engaging in racial profiling against Latinos. Others come from state agency detectives, highway patrol and municipal police.

But what they all have in common is that prosecutors in MCAO’s Special Crimes Bureau have been charging these undocumented immigrants as felons, and then offering pleas to offenses that are considered deportable under immigration law.

Rascón and her pro-bono defense attorneys chose to fight the case – or, at the very least, reach a plea deal to an offense that would not hurt her immigration chances.

“We have our moments in which we second guessed ourselves,” said Delia Salvatierra, who defended Rascón. “This has been a difficult journey. A journey that was really about courage and love for my client.”

After nine months of courtroom arguments and briefings, just when they were about to go to trial, the prosecution changed their plea offer from a felony to a misdemeanor. Rascón ended up pleading to a class 1 misdemeanor, “criminal possession of a forgery device.”

“I didn’t believe it was going to happen,” said Rascón. “It was a great miracle.”

Picked up in a raid

Rascón was detained on Aug. 9, 2012 at GNC vitamin supply company, where she has worked in the packaging department for the past decade, making $14 an hour. She was arrested with four other people in one of Sheriff Arpaio’s highly publicized worksite raids.

Rascón says she never used false paperwork or took on another person’s identity.

“You cannot compare someone like Luz with somebody who steals your credit card,” said Salvatierra. The social security in her work application didn’t belong to anyone and according to evidence presented in court it wasn’t filled in by her.

MCAO prosecutors had been unwilling to lower the plea deal offered to Rascón until the case went to trial.

Jerry Cobb, a spokesperson for the agency, said they offered her a lower plea because they received new information that “reduced the likelihood of conviction” in her case.

Rascón’s case isn’t an exception, said Cobb; it’s not uncommon for prosecutors to consider different factors in lowering a plea. But it also doesn’t mean that MCAO will treat these cases any differently in the future.

When attorney Salvatierra and her partners Dori Zavala and Johnny Sinodis decided to take on cases like this, local immigrant rights advocates responded in support. Groups like PUENTE held protests in opposition to MCAO’s practice of charging undocumented immigrants with felony identity theft.

For years, Sheriff Joe Arpaio had stolen the spotlight from other law enforcement agencies when it came to cracking down on illegal immigration. But in this case the focus shifted to the recently elected county attorney, Bill Montgomery.

“Our purpose of putting public pressure is for them to do their job and not just convict them because they’re undocumented,” said Salvatierra.

Maricopa County Attorney Bill Montgomery disagrees with that assessment of his prosecuting work. Beyond Rascón’s case, he said he will not change the way he charges those picked up in worksite enforcement raids, even in light of a federal judge ruling against Arpaio’s immigration enforcement practices.

Most of those charged with these types of felonies don’t go to trial according to statistics by MCAO. So far this year, there were 187 pleas to state charges of aggravated identity theft or identity theft. The only two trials on the record as of the end of May, resulted in defendants being acquitted.

But Cobb of MCAO believes this is beginning to change.

“It’s our impression that more of these defendants are choosing to go to trial,” said Cobb.

Cobb said one of the reasons has to do with the renewed discussions for immigration reform. “That has created a perception within the Hispanic community that it’s better to try to fight these charges,” he said.

Montgomery, who has advocated for immigration reform by joining forces with a local bipartisan group, reiterated that his office does not charge people with the goal of getting people deported, and says he won’t change the way he charges these cases.

“We don’t charge them to get some sort of immigration result,” Cobb explained. He said political pressure should focus on U.S. Immigration and Customs Enforcement (ICE), which makes the final call as to who will be deported and why.

Rascón’s case isn’t the only one that has succeeded in getting the charges reduced. The team of attorneys that helped her has been successful in getting several other recent cases dismissed or acquitted by a jury.

Last month, Montgomery’s office asked to dismiss charges in the case of another undocumented immigrant, Octavio Castañeda, after the judge suppressed evidence against him that was illegally obtained. Castañeda was charged with several counts of identity theft after a Department of Economic Security (DES) supervisor used information in his children’s file to tip off a detective that he was working under a different identity. He spent eight months in jail while he and his attorney Dori Zavala fought the case.

Miguel Angel Morales, who was picked up in a construction site raid, was acquitted by a jury when his attorney, Ray Ybarra, raised the question that his employer might have been involved in completing his job application. Ybarra said it was also alarming that Morales was arrested the day of the worksite raid, since his name did not appear on the search warrant. Morales spent six months in jail fighting the charge.

In each case, defendants had to be willing to stay in jail to argue their innocence, since undocumented immigrants facing serious charges in Arizona are denied the right to bail.

Still, Salvatierra is hopeful. She and other members of Los Abogados Hispanic State Bar Association have attended meetings with Montgomery that she expects will open the door for prosecutors to consider different pleas based on the facts of an individual case.

“They weren’t looking at these cases any different before we started to put [on] the pressure,” said Salvatierra, who hopes her team’s work will set a precedent that other attorneys at the public defenders office can follow.

Rascón now picks up her 10-year-old daughter from school every day.

She even stands a strong chance of getting a green card. Her 18-year-old son has leukemia, and she could make a strong argument in front of an immigration judge that if she were deported, it would cause him irreparable harm.

Other undocumented immigrants in deportation proceedings don’t have the same favorable odds – even less so if they plead guilty to felonies.

Rascón fought hard to get those odds.

“God willing there’ll be immigration reform for all of us,” she said. “We are here working and we’re not hurting anyone.”