The best (and the weirdest) of "Game of Thrones" fanfiction

Missing the show? Take to the Internet! 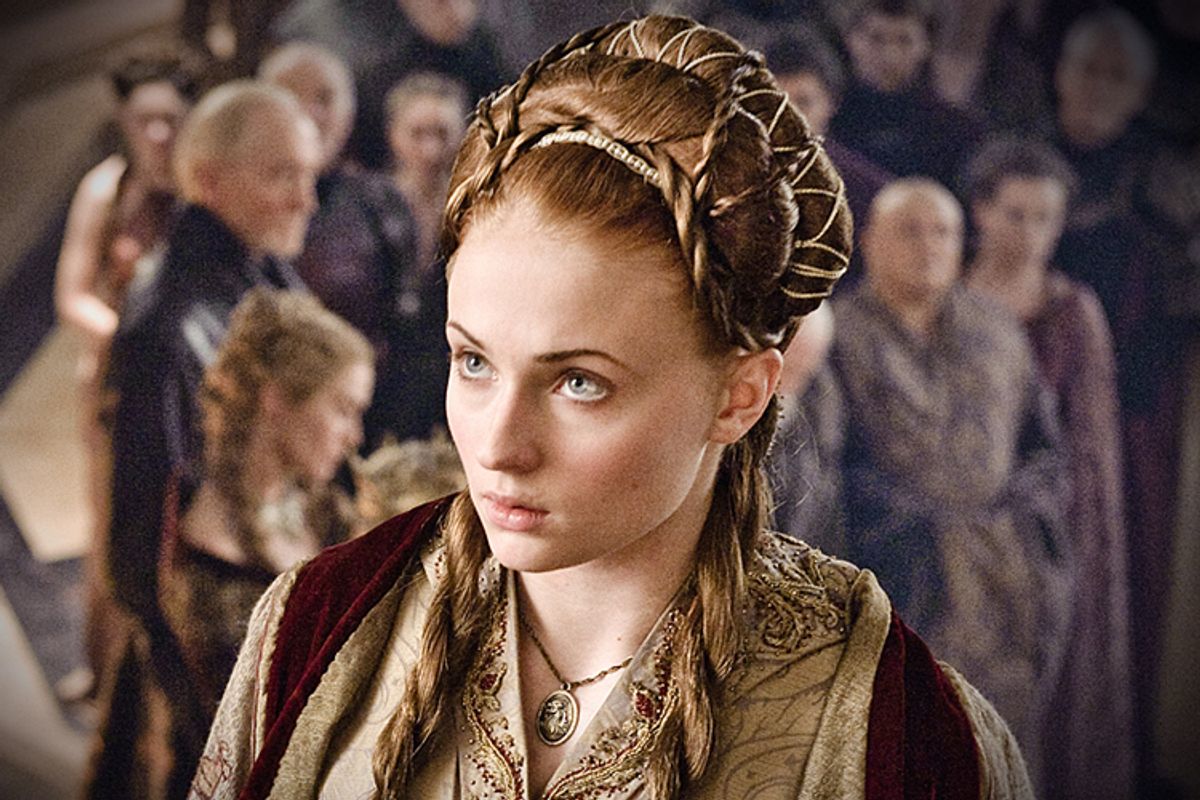 Sophie Turner as Sansa Stark in "Game of Thrones" (HBO)
--

It's one thing to have a passing familiarity with fanfiction — to know a little bit of the vocabulary, or have stumbled across a few fics on Tumblr — and another thing entirely to immerse yourself in it for days. Hours disappear into following one writer's recommendation or another, or starting a promising piece only to realize that it's hundreds of thousands of words long and will take more time than you were planning to give.

On Archive of Our Own (AO3), a massive, fan-created trove of tales, there are nearly 5,000 stories tagged as belonging to A Song of Ice and Fire, and more than 2,600 tagged Game of Thrones. They span alternate universes from modern London to Romanov-era Russia; they envision the story post-"A Dance with Dragons"; they revel in character studies and beloved pairings. (Was Arya/Gendry ever so popular before viewers saw Joe Dempsie's abs?)

And, of course, they offer lots of inventive, carefully labeled smut. If you assume that all fanfic is of the Harry-and-Draco-get-it-on-on-the-Quidditch-field sort, you might be surprised (or disappointed). Plenty of "Thrones" fic stays on the straight side, exploring the moment Catelyn and Ned fell in love, or imagining a burgeoning relationship between Myrcella Baratheon and Robb Stark. Still, sometimes Margaery and Sansa make out; sometimes Theon and Robb get really, really close. There's something for everyone, provided you're willing to see George R.R. Martin's characters in ever more compromising positions.

Where do you start? Do you read inside your comfort zone, or go exploring? Do you brave the more than 100 fics that pair poor Theon with his tormentor, Ramsay Bolton, or do you look for a happy(ish) ending in the stories that find various Starks rebuilding Winterfell after the war? You can have absolutely anything you imagine (which makes it very difficult to make definitive statements about fanfic as a whole). You just have to figure out what that is.

AO3 has a pretty fantastic search engine, and will let you pick only long fics, or tame ones, or those about Dany and her Khal. Tags are clickable, so you can easily find all eight of the stories tagged both “A Song of Ice and Fire” and “Women Being Awesome.” But figuring out what you want and how to find it only eases a little bit of the touristy feeling. Fanfic is an immersive, collaborative world, and to be just a reader of it is to miss a lot of what makes it tick: writers taking prompts, writing stories for friends, beta-reading each others' work, inspiring and being inspired by the stories that might sprawl across fandoms. It's unexpectedly lonely being just a reader when it's so clear how much action is going on behind the scenes.

Martin's books are often hailed for subverting genre conventions and reversing fantasy tropes; as Ned Vizzini points out, “The characters who stay alive are the despoiled,” rather than fantasy's beloved heroes and innocents. So what does fanfic, which thrives on subverting expectations, do with this? It skips over Tyrion and Littlefinger, Varys and Tywin, and goes straight to the young'uns, telling stories about a less war-hardened Robb or having Sansa tame the Hound, à la "Beauty and the Beast." The tone is flipped: brutality and loss linger around the edges rather than filling the screen. Writers set stories before or after the war, finding ways to explore characters in quieter moments, or strip out the high stakes, imagining Westeros as high school, run by mean girls and jocks.

A few goofy, clever fics play fast and loose with the settings and characters — like “For Those About to Rock, We Salute You,” in which Robert is the lead singer of Westeros' most popular band. When he dies, his useless, cocky son steps in. (Extra points for the inclusion of an entertaining press release.) Tired of Theon being miserable? Visit the alternate universe in which he and Robb form a folk group.

Sansa Stark: The girl with the most lemon cakes

Sansa dominates in fic. She's the Queen in the North; she's married to the Hound; she's paired up with Jon Snow; she's befriending a new queen or escaping her captors.

Why Sansa? Maybe it's because she's so caged up that writers want to free her, whether to rule, to explore, or to marry someone of her own choosing. Her story is still one of potential, and fic writers find endless ways to explore that, and to play with the clichés that a younger Sansa took for granted. She's the closest thing Westeros has to an innocent, so putting her in the foreground is a swift and logical subversion of Martin's world, where no one could possibly become a ruler without killing at least a few hundred people first.

It's also easier to be a fan of Sansa quietly, without having to explain repeatedly that she isn't just a stupid little girl who betrayed her sister because she wanted to wear pretty dresses and live like one of her beloved stories. There's no shame in loving feisty, self-sufficient Arya. To identify with Sansa is to admit that you were once young and oblivious, that you don't disdain traditionally feminine things. To write really good fic in which Sansa grows up, gets smart and beats Westeros' conniving families at their own game? That's not just satisfying; it's potentially downright empowering.

I just want to be reading "The North Remembers"

The reason for this is simple: It's good. Silverblood picks up at the end of "A Dance With Dragons," giving point-of-view chapters to minor characters, acing a creepy scene beyond the Wall, and inventing impossibly convincing plot points. Her versions of the characters sound like themselves, and her story marches so steadily off in all the right directions that you may begin to suspect she knows something the rest of us don't. It lines up so neatly with Martin's narrative that it will mess with your head: I'm on chapter eleven of "The North Remembers" and already having to remind myself that these things didn't “really” happen.

No results found for “feminist game of thrones fanfiction”

If someone has written an epic feminist re-envisioning of A Song of Ice and Fire, they haven't made it easy to find. (I hold out hope.) But while "Game of Thrones" has failed some of the books' female characters, watering down Cersei and muting Catelyn, fic writers have got their backs. Few fics are explicitly labeled as feminist, but many put queens on the throne, explore minor female characters, or invent moments between two women who've rarely or never had a chance to talk. In “The Summer Queen,” honey_wheeler has Queen Sansa choosing an entirely female Queensguard; her point-of-view characters switch between the queen and her soldiers, and the resulting story, a snippet of life after the war, more than passes the Bechdel test even as it's largely concerned with who Sansa's king might be. Netgirl_y2k gives Dany's doomed handmaiden, Doreah, a complicated second life in “They Will Crown You, They Will Take Your Legs,” envisions Cersei as a young mother hoping for the best for her children in “A Lion Among Ladies” — and imagines a still-troubled Westeros in which women inherit in the too-short “Our Marvellous Inheritance,” which hews closely to Martin's established world even as it turns it entirely on its head.

Ninety percent of everything is crap, and fanfiction is no exception. A lot of tabs get quickly closed, whether for unreadable writing, basic failures of punctuation, aimless plotting, inane characterizations or just sheer boredom. (Or, depending on your predilections, the wrong pairings; I cannot convince myself that Jaime and Brienne are meant to be a couple.) Fanfic is rife with awkward titles taken from song lyrics or quotes; many stories sound the same, relying on a breathless present-tense style. The forced immediacy gives these pieces a dreaminess that's at odds with Martin's sturdy storytelling.

But not everyone wants to feel like they're in the author's sandbox. Even the crap serves a purpose, and probably makes somebody somewhere very happy, whether the writer, or the reader who requested a story to scratch a particular narrative itch. The easy thing to forget when reading fanfic is that it isn't necessarily for you, or for me — us mundanes who don't create it, and don't play our own roles in the world that fic creates. Their universe is self-sustaining; we're just visitors with our own narrative urges. Don't like what you find? Write your own.