"The Ocean at the End of the Lane": Neil Gaiman returns

In his first adult novel in eight years, the master of modern fantasy tells the story of a lonely, bookish boy 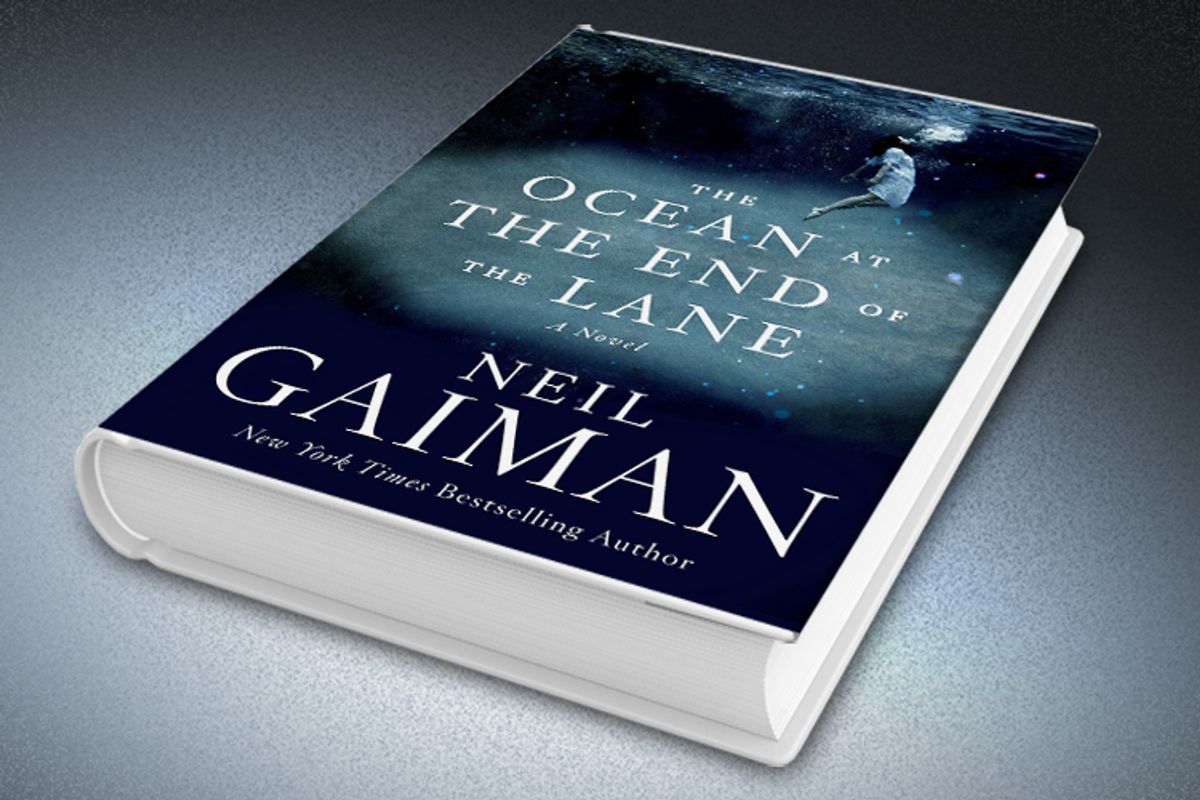 Youth and its struggles have always been a central subject of Neil Gaiman's novels, and not just the ones written specifically for children ("Coraline," "The Graveyard Book"). His adult fiction (until this week, the most recent novel was 2005's delightful and rather underappreciated "Anansi Boys") describes characters in pursuit of true love or sorting out their relationships to difficult parents -- the most beleaguered among them being Shadow, the hero of "American Gods," who may have the most vexing father ever.

Gaiman's first novel for adults in eight years, "The Ocean at the End of the Lane," would seem to follow this pattern; most of the action, recounted in the first person, describes the experiences of a nameless 7-year-old boy. But "The Ocean at the End of the Lane" does feel different, and not only because of its framing device. The novel begins and ends with the narrator, now an adult, returning to the English village where he grew up, for a family funeral. (The deceased is never identified, but there are hints it is the man's father.) We learn that he's been married and separated, that he is a working artist, that he has grown children. When he looks back on the strange events of his childhood, it is through the mellowed and slightly melancholy lens of middle-age. What the story sacrifices of the sweet, glassy purity of a child's view, it compensates for with the complex sepia of maturity; it's the difference between a bright young white wine and a well-aged burgundy.

Like all of Gaiman's novels, this is a kind of fairy tale, populated by mythic creatures who are not always fully identified. The narrator leaves the funeral for a contemplative drive and finds himself rolling down the titular lane to stop at a farm. He's greeted by a vaguely familiar old lady, and walks out to have look at the duckpond, whereupon he suddenly remembers the momentous events of his eighth year. It is these memories that make up the main body of the novel.

As a lonely, bookish, timorous boy, the narrator witnesses the discovery of a suicide's corpse; the man is a boarder who drove off into the countryside to suffocate himself in the family's car. The Hempstocks, who live on a nearby farm, take the boy in for an hour or two while his father deals with the police, and they feed him the first in what will be a series of meals that constitute the platonic ideal of British country dishes -- porridge with blackberry jam and cream, roast beef and potatoes, pancakes with lemon and sugar, apple pie with more cream. (And yes, Gaiman makes it all sounds delicious.) The three Hempstocks are Lettie "at least eleven", her mother Ginnie Hempstock and Ginnie's mother, Old Mrs. Hempstock, first seen milking the cow who's the source of all that lovely cream. Very much later, the boy will ask Ginnie if she has a daddy, and she'll say "No, love. We never went in for that sort of thing."

The bones of the story involve the mysterious Hempstocks' attempts to dismiss a malicious entity admitted into the everyday world by the suicide. This creature plagues human beings by, as Lettie puts it, finding "what they think they need" and trying to give it to them; the results are predictably disastrous. The Hempstocks regard this creature with a brisk contempt (Old Mrs. Hempstock refers to it and its kind as "fleas"), but their plans to whisk it back to wherever it came from go awry when the thing manages to attach itself to the boy.

"The Ocean at the End of the Lane" has a strong autobiographical mood, and Gaiman has said that the novel is about his childhood even if the facts (apart from the suicide) do not match incidents in his own life. The surface mechanics of the supernatural plot often feel less essential than the series of scenarios and motifs it enables. There's a birthday party for the boy -- complete with a cake decorated to look like a book -- that no schoolmates bother to attend; indistinct and often absent parents; a little sister who is more rival than ally; a beloved pet kitten run over by a car and callously replaced by a surly tomcat; the books that provide wonder, companionship, useful information (using a drainpipe to climb out an upstairs window) and models of courage for "such a frightened child."

Most memorably, there's the worst nanny of all time, Ursula Monkton -- who pops up out of nowhere and is also, of course, the "flea" in disguise. Ursula bewitches the boy's sister, seduces his father and tries to keep the boy himself from seeking the Hempstocks' help, threatening to lock him up in the attic. "She was the adult world with all its power and all its secrets and all its foolish casual cruelty," the narrator observes. The impotence of childhood is often the first thing sentimental adults forget about it; Gaiman is able to resurrect, with brutal immediacy, the abject misery of being unable to control one's own life. Worst of all, under Ursula's influence, the boy's father becomes a terrifying and dangerous stranger.

It's a mistake to think that the figures and events in fairy tales simply "symbolize" elements of real life, the way the gibberish of a code merely stands for the intelligible message that can be derived from it. These stories have their own meanings, meanings that resonate with universal experiences without being reducible to those experiences. "The Ocean at the End of the Lane" resonates intimately with certain aspects of childhood (especially for book-loving children), perhaps more so than anything else Gaiman has written, but it's still its own story. And it sends out tendrils to other stories by other writers, too. There are many loving echoes here of the literary touchstones of Gaiman's youth: Mary Poppins (the Poppins from P.L. Travers' books, not the one in the Disney movie), Narnia and "Alice in Wonderland."

"Nobody actually looks like what they really are on the inside," Lettie tells the boy. "Grown-ups don't look like grown-ups on the inside either. Outside, they're big and thoughtless and they always know what they're doing. Inside, they look just like they always have. Like they did when they were your age. The truth is, there aren't any grown-ups. Not one, in the whole wide world ... Except for Granny, of course." (That's a hat-tip to Travers, surely a Hempstock to the young Gaiman, right there.) It's certainly the sort of thing you can say to a child, but that can only be fully appreciated by an adult. The best grown-ups, the coda of "The Ocean at the End of the Lane" suggests, are the ones who succeed at recollecting such truths. Not all the time, perhaps, but at least every once in a while, with a little help from some extraordinary friends.