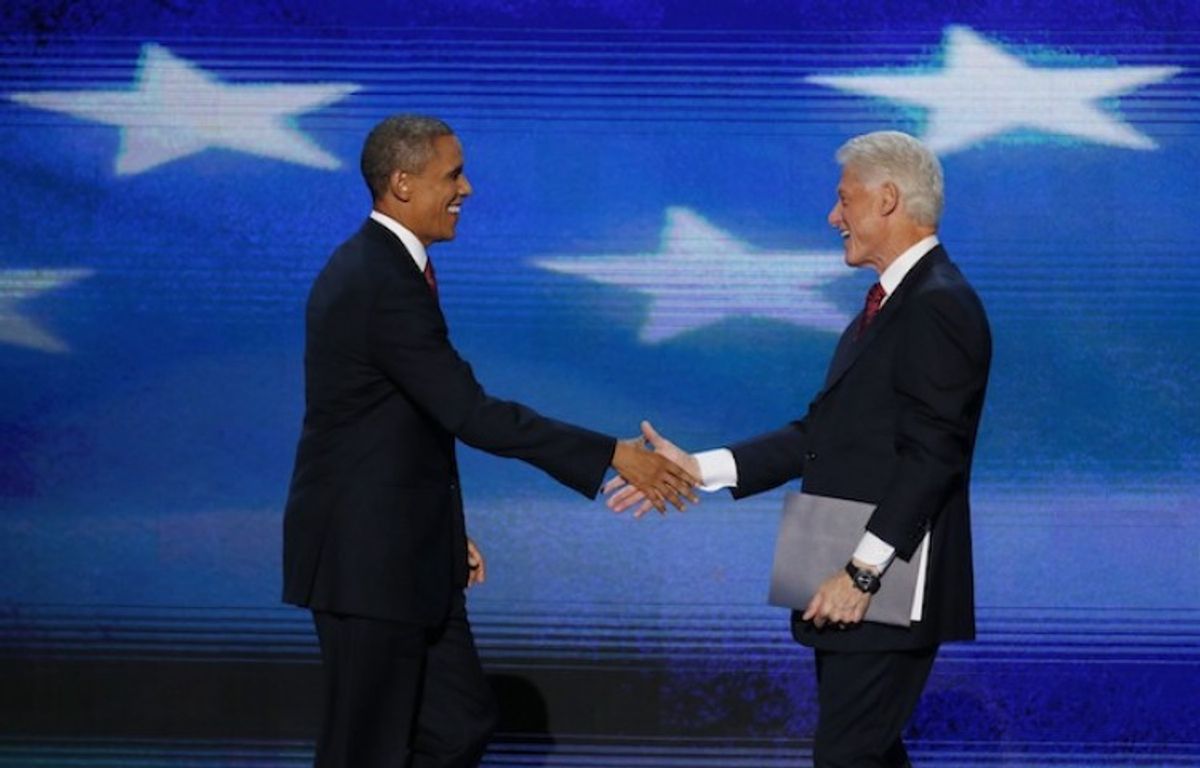 When the most popular Democratic president since FDR takes a swipe at a sitting president of the same party, pay attention. Barack Obama’s recent decision to start arming the Syrian opposition was driven by many factors, and conceived well before Bill Clinton implicitly accused him of being a ”wuss” on Syria. Clinton didn’t turn a risk-averse president into a risk-ready one on Syria -- how Obama wants to be remembered as a president did.

And that’s why the substance and timing of Clinton’s remarks matter.

Indeed, given the limited supply of weapons the administration is prepared to provide the rebels, Obama’s change of heart isn’t about overthrowing Assad or jumping militarily into Syria with both feet; it’s about protecting his own credibility, reputation and legacy in a second and final term.

The problem, of course, is that if arms to the rebels don’t answer the mail, the president may well be forced to do more – an uncertain road that could well end up damaging the legacy he so badly wants to protect. What prompted the administration of a cautious president to change course on Syria – even in a limited way -- is still unclear. For a year plus, the president avoided militarizing the U.S. role. Indeed, he went to great lengths to do so, including allowing Secretary of State Kerry to play footsie with the Russians on a Geneva political track.

The administration decision-making narrative on Syria goes something like this: The decision to begin arming the rebels was made as early as April and validated by increasing evidence that Assad used chemical weapons – a self-described presidential red line. But it’s now June and this red line had already turned pink with no action being taken. It’s hard to believe this was the precipitating rationale for arming the rebels.

There’s another narrative that’s more compelling, and it goes like this: Barack Obama is the extricator-in-chief. His goal is to get America out of long and profitless wars, not into new ones.

He really didn’t want to go down this road. But he was pushed – certainly not by the public or even the Republicans. But by the reality that the Syrian civil war wasn’t going to end any time soon -- and that while the public wasn’t pushing for America to end it, unless he did something his own reputation was going to suffer. Not in the current polls, but in the big poll that starts to matter to a second term president – the judgment of history.

Obama’s reluctance to intervene in Syria may be savvy politics and in step with public opinion now. But with 100,000 dead and who knows how many more to come, nobody (history included) would have understood why America couldn’t have at least tried to do something more to stop the killing. And if Obama didn’t get it, then those closest to the president, perhaps including Michelle, did.

Enter Bill Clinton. Presidents rarely take whacks at sitting presidents unless you’re Jimmy Carter and, well, he’s a bit unusual. So when Clinton indirectly criticized Obama on Syria for being guided by politics rather than the national interest or morality, he framed the central question – even if Obama had already set his decision on arming the rebels into motion. And the fact that Clinton did it in response to John McCain, chief interventionist -- and with the full knowledge that Hillary had supported arming the rebels as secretary of state -- made it even more significant.

Whether Obama was moved – or just annoyed -- by the statement, it really did underscore the president’s dilemma. After all, the clock’s ticking down on the Obama presidency, and along comes a guy who as president presided over two humanitarian catastrophes. The first, Rwanda, on which he regrets not doing more; the second, Bosnia, he takes credit for intervening — however late. And now in response to John McCain, who thinks Obama is abdicating his responsibility in Syria, Clinton’s out there essentially agreeing.

When a popular former president who got credit for finally showing resolve in Bosnia criticizes a sitting president who’s not in Syria, it matters.

Never mind that, according to Edward Joseph and Elizabeth O’Bagy, Bosnia had three things Syria doesn’t – the parties were exhausted, the Bosnians were pretty unified and the territorial lines were clear enough to produce a settlement. Two years into the Syrian civil war, Obama and his advisers perceived a vulnerability on Syria and have acted to try to correct it.

But herein lies the rub. The very course the president has identified to improve his credibility and guard his reputation almost certainly won’t work. And he may well be forced to consider other steps that are more encumbering and riskier, trapping the president in the very course of action he was so determined to avoid.

Bosnia worked out for enhancing the legacy of one president; Syria might not for another. And that would be the cruelest of fates for a second-term president whose priorities aren’t chasing windmills abroad but looking to address the nation’s broken economic and social house at home.

Aaron David Miller is currently a Distinguished Scholar at the Woodrow Wilson International Center for Scholars. For two decades, he served at the Department of State as an advisor to Republican and Democratic Secretaries of State, where he helped formulate U.S. policy on the Middle East.