How Kraft salad dressing is profiting off the female gaze 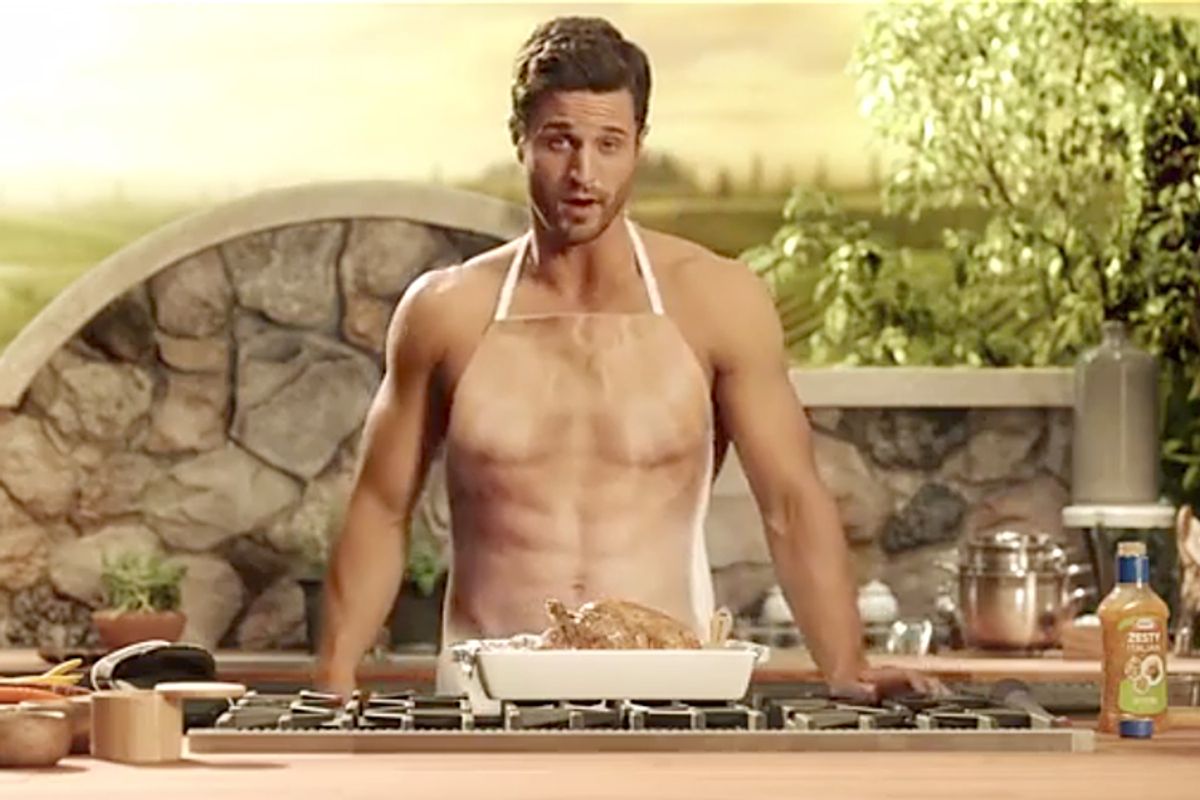 This past spring, Salon received repeated emails from a public relations firm representing the star of an ad campaign. Behind this Borgesian hall of mirrors lay a potential interview subject, the "New Face of America's Hottest Campaign," a model and actor who would soon begin representing Kraft's "Zesty" Italian dressing in what was termed a "super sexy secret ad campaign."

We thought nothing of it, at the time; the campaign hadn't launched yet. It ended up being one of the most compellingly offbeat campaigns in recent memory -- and we later received a slew of press releases indicating that they'd been right all along. Kraft had manufactured a star as easily as it would have manufactured a brick of Velveeta.

In the inaugural ad, salad dressing, that least sexy of foodstuffs, is slowly poured on a burning skillet by the model, one Anderson Davis (previously of campaigns for Gillette and Bud Lite, as well as a Katy Perry music video). The final dollop of dressing ends up burning his shirt off. In print ads, Davis, as "the Zesty Guy," lounges shirtless amid still-life tableaux of salad and pasta dishes. The message is twofold:

Davis has made a variety of media appearances, including on Bravo's "Watch What Happens Live" and the syndicated talk show "Live! With Kelly and Michael" in order to promote the brand. It's the most coordinated push behind a single pitchman since the "Old Spice Guy," clad in but a towel, took YouTube by storm. Amanda Hess, writing for Slate, asked whether the advertising industry had "reached Peak Hunk."

Patrick O'Neill, the creative director behind the Kraft ads and media rollout, told Salon that there had been an attempt to differentiate this campaign from Old Spice's -- given the target demographic. "The biggest part of the audience is moms. We wanted to bring out the side to her that might not be spoken to in the category. All moms, women, mid-20s to -50s, have that side to them that isn't spoken to very often. And moms and daughters can enjoy this together."

What side is that? Well, a Kraft pitchman, unlike the brash and chummy Old Spice mascot, would have to be fairly explicitly the object of the female gaze. "Old Spice was more of a sports, jocky, athlete vibe. This is a lot more sensual, cooking, Italy, all the stuff that makes Italy amazing -- he doesn't have a shirt on but it's a different concept going on. He's trying to light the fire in all the ladies." The results may be mixed: The newest print ad, featuring Davis nearly naked but for a picnic towel covering his genitals, has become the object of a One Million Moms protest.

Davis explained the "Zesty Guy" this way: "The character is confident but not cocky. I made him carefree, not worrisome about what people thought. And I made him likable and humorous. He's in on the joke. Whoever he's cooking for, they're glad he's cooking for them. He can't do anything wrong, and he knows it!

"There was a big character breakdown," he added.

O'Neill, who claims credit for Joe Boxer's dancing shirtless guy and Absolut Vodka's "Absolut Hunk" campaign on "Sex and the City" ("I have a reputation for doing beefcake stuff," he laughed), noted that he'd leaned heavily on female colleagues in designing the campaign. They suggested that the tone and salacious humor of "Fifty Shades of Grey" and Bravo programming come into the campaign. "The idea of a male sex object that's inspired by a female audience -- not written for them by men -- that's a new phenomenon," he said.

"I told the director, 'I'm not going to let you do this unless you do it in drag!'"

O'Neill noted that "salad dressing is a low-interest category -- no one is speaking to the target audience in a way that was disruptive or engaging." And a time of meme saturation necessitates an attention-getting ad campaign: no more simple shots of carrot sticks dipping into a bowl of oil-and-vinegar solution. "The target audience is savvy, engaged in pop culture. We want to become relevant." A simple Twitter search indicates that, nearly three months after the campaign's launch, it's won over a segment of the audience.

Both O'Neill and Davis hinted at more ads in the months ahead, with Davis going into character on the phone, promising that the summer would be "real, I guess you could say, zesty." For all the popularity of the character -- both O'Neill and Davis promise more ads in the months ahead -- it's an open question as to whether he represents an advancement in his appeal to women, or just a twist on the salaciousness that's governed advertising aimed at men for decades.

"As men, we don't mind being a piece of meat," said Davis. "'I've accepted it. But anyone who watches the commercials will realize there's acting involved. There's lots of commercials where guys have shirts off and they're in shape. Being in shape in L.A. is a dime a dozen. But there are lines, and moments, that aren't just about being fit."

But memes have a shelf-life. Davis, who recently appeared on "Live!" shirtless, told Salon, "I don't know if it's getting old yet." Besides, it's easier to hide behind an outsize "sexy" persona. "I think the idea of fame -- there are upsides, but it's kind of a disease that you don't really want," he said. "Or I don't."

Lucky for him, then, that despite the pervasiveness of the campaign, he isn't noticed on the street much: "The Zesty Guy is a superhero. When I'm the Zesty Guy, I'm unclothed, and when I'm wearing clothes, no one recognizes me."

And there's always someone on your tail. A few weeks ago, People magazine shed its spotlight on a muscular male mascot for Diet Dr Pepper, who decided to doff his shirt on a midtown Manhattan street. Though the cola was nowhere in the shot, surely the ad had something to do with how Diet Dr Pepper is refreshing, or something.