On "Yeezus," the rapper's still bragging about exploiting women to make his points. He's smarter than that 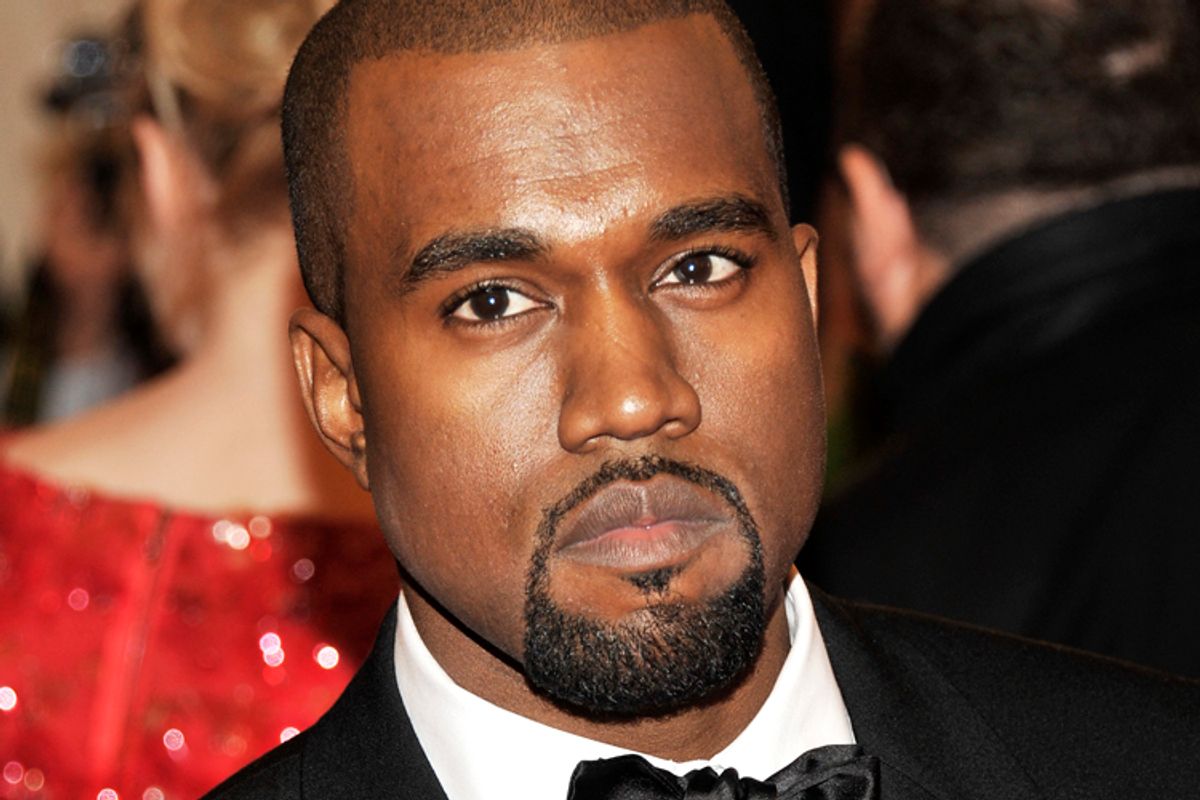 Kanye West is about as subtle as a Range Rover. From the pink-Polo prep of debut “College Dropout” to 2010's ominous “My Beautiful Dark Twisted Fantasy,” each of his albums has arrived with the force and presence of a runaway train, crashing over anything in sight. He has evolved from a producer with a chip on his shoulder to rap royalty through constant challenge and innovation. Kanye has a penchant for drama, unfortunately for Taylor Swift, but he also has the musical prowess to back his swagger. But an obsession with making his point by denigrating women continues to blunt his impact.

In an interview with the New York Times, the Chicago-bred rapper indicated that his sixth album, “Yeezus,” would provide articulate commentary on race, a subject that he first tackled in "College Dropout's" "All Falls Down." A "Saturday Night Live" preview of album cut "New Slaves" demonstrated bold, anti-pop beats rallying against privately owned prisons. It was a perfect opportunity to start a real conversation. Kanye has the audience, he has the gravitas, and he has the intelligence to make people actually listen.

So it was a "Yeezus"-size fireball that hurled onto the Internet Friday as, days before its June 18 release date, the album leaked. Grimy industrial beats and studies in minimalism are an incredible leap for an artist who errs toward tracking indulgence, and the album's been viewed, again, as game-changing. But where the production excels, the lyrics water down the album's importance. Kanye boldly and unapologetically tackles race relations. He's not trying to make anyone feel comfortable about the institutionalized racism that is particularly rampant in the upper classes. But you can only discern this message amid a triggering, pornographic album that becomes no less bruising in subsequent listens.

Perceived misogyny in rap should always be viewed with the historical connection of race and gender in mind. The two are inextricably bound, and the frank nature of rap often makes it the poster child for sexism in music. But these attitudes exist in every sphere of music, just as they do in every social group. With that in mind, it makes less sense to single out Kanye for sexism than to consider how it impacts his particular artistic mission. And the problem with "Yeezus"-brand misogyny is that it comes in the form of egregiously perverse asides that largely detract from the central message.

One of the tropes in "Yeezus'" lyrical analysis is the sexual politics of race. It surfaces in his fantasy revenge on the wives of the Hamptons in "New Slaves."

There's a way to deal with the history of power plays between black and white men without reducing women into a vessel for revenge. Yes, Kanye has almost certainly faced an ugly form of racism for his relationship with Kim Kardashian. Yes, this is absolutely a problem. But what begins as a lambasting of the prison-industrial complex loses its foothold when it wanders into crass depictions of sexual domination. Kanye spits like a teenager bragging about sick payback. He describes taking a woman as a conquest, uses her as nothing more than a means to a self-congratulatory end. It ultimately sullies the message.

This race-sex trope surfaces as early as first track "On Sight," and in an uncomfortable way.

"Black Timbs all on your couch again,

Black dick all in your spouse again,

She got more n*ggas off than Cochran."

It's hard to divorce this from the idea that he is talking about his girlfriend and the mother of his child, whom he impregnated while she was still legally married to Kris Humphries (thus the spouse reference). The double entendre involving "chocolate men" and lawyer Johnnie Cochran, likely a reference to Kim's dating history, would be a superfluous and sexist remark aimed at anyone, let alone the woman who brought his little girl into the world the day after the leak. Sure, airing public tension is not treading new ground musically, but politicizing your girlfriend's dating and sexual exploits to do so adds little to the discussion.

The argument of "Yeezus" gets further distorted when sexual domination resurfaces completely out of context. "Bound 2" details more X-rated relations in a song that otherwise candidly captures the difficulty of navigating relationships. But it's the sex-crazed halfway marker "I'm in It," which juxtaposes the civil rights movement and, you guessed it, sexualizing women, that is the most visceral and self-serving: the civil rights sign used in perverse sexual acts, and a woman loosening her bra met with a bastardized proclamation of "free at last, thank God almighty, they free at last." These sex scenes never serve an actual point in the context of racial struggle, ringing as braggart rather than revolutionary. The social critiques introduced by second track "Black Skinhead" ("They see a black man with a white woman, at the top floor they gone come to kill King Kong") are so muddled in sexual exploitation by this point that it's hard to view the song as provocative commentary.

Kanye is getting fired up about the right things, but in order to properly get his message across he needs to check an ever-inflating ego. Making his value known through sexual power still seems more important to him than starting conversations. Five platinum albums should be proof that we're listening. We'd like to hear it again without the Fifty Shades of Kanye.