He won’t back his own bill, an aide insults American workers, and his angling looks wishy-washy, not savvy 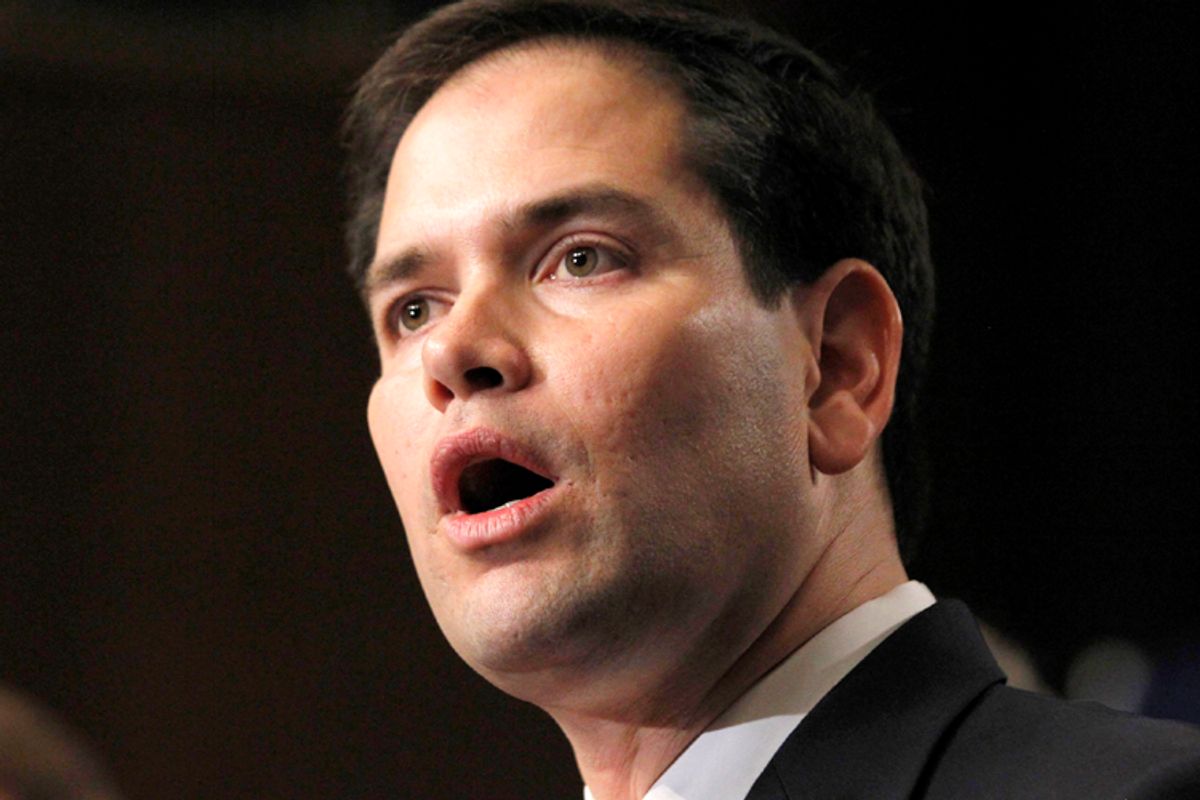 It was big news that Sen. Marco Rubio wouldn’t say he backed his own immigration reform bill on ABC’s “This Week” Sunday. He told Jon Karl it was “an excellent starting point,” oddly passive language for someone who’s a co-sponsor. Obviously Rubio is keeping his promise to the right to push for even tougher border control in the final bill, but his wishy-washy response didn’t seem leader-like.

Luckily or not, Rubio’s wimpy reply was overshadowed by reaction to a deeply reported New Yorker piece by Ryan Lizza that placed the Florida Republican at the center of the "Gang of Eight" negotiations. It featured a choice quote dissing American workers from an anonymous Rubio aide, explaining why his boss backed the Chamber of Commerce over the AFL-CIO when it came to a guest worker agreement (they eventually compromised): “There are American workers who, for lack of a better term, can’t cut it. There shouldn’t be a presumption that every American worker is a star performer. There are people who just can’t get it, can’t do it, don’t want to do it. And so you can’t obviously discuss that publicly.”

That made the Tea Party favorite look like a tool of Big Business (which of course he is), and Rubio (the only gang member who didn’t participate in the Lizza profile) was forced to issue his own statement: “The quote attributed to a member of my staff was a description of one argument used against big labor’s opposition to a guest worker program. It is not my view in any way. I could not disagree with it more.”

I would suggest anyone who gets the GOP nod in 2016 will be able to use that slogan, but that’s another story.

Before the flap over Rubio’s aide’s comment, what I thought was most interesting about Lizza’s piece was the length Rubio’s fellow gang members have gone to placate him. On the record, Sen. Chuck Schumer told Lizza: “[Rubio’s] the real deal. He is smart, he is substantive. He knows when to compromise and when to hold. And he’s personable.’” Wow, Chuck, you left out handsome! But wait: According to Lizza, an aide to New Jersey Sen. Robert Menendez said, “iIf the Gang were a group of high-school students, Rubio would be the cool jock and the captain of the football team, with whom everyone wanted to hang out.”

Um, OK, I guess that underscores that the Gang of Eight is all male.

But Lizza’s story was quickly followed by Politico’s counter-narrative, “Marco Rubio’s angling provokes some Gang of Eight angst.” Some of Rubio’s colleagues are apparently frustrated with the cool jock and captain of the football team playing both sides of the issue. They say Rubio has undermined the public perception of unity by turning down requests for joint press conferences and appearances with his fellow gang members, and more substantively, by seeming to side with Sen. John Cornyn on impossibly strict border security measures that are likely to kill the deal with Democrats and moderates.

Right now it seems like both sides are most concerned with whether they’ll have the upper hand in the spin cycle assuming the bill fails. White House folks told Lizza, “If the Republicans try to scuttle it, we’re the ones who can communicate to the Latino community who scuttled it.”

It’s beginning to look as though Rubio doesn’t necessarily want a bill, either, as long as he can blame its failure on unreasonable Democrats. Meanwhile, House Speaker John Boehner may be unwilling to break the Hastert rule and let a bill come to the floor without a majority of Republicans supporting it. (Presumably, a decent immigration bill could pass with heavy Democratic backing and a minority of Republicans, just like the fiscal cliff deal in January.) Several Boehner aides told the Washington Examiner’s David Drucker that “there’s no way in hell” the speaker will let the bill pass without majority Republican support. If that’s true, there’s no bill, and the side with the best way to spin the loss becomes the winner.

But Rubio’s making himself a lot of right-wing enemies along the way, people who won’t be mollified if the bill fails. Right-wing Iowa talk radio host Steve Deace says, “Marco Rubio shouldn’t even bother showing up in 2016,” in the first caucus state, given his role in the Gang of Eight. Rubio’s 2016 hopes may be fading faster than his bill’s chances.

In the end, Rubio’s worst sin may not be backing immigration reform, but angling around it so blatantly that he winds up looking wishy-washy, not resolute – an image that won’t go away even if the bill does. In an editorial headlined “Rubio’s Folly, Cont” the National Review blasts his maneuvering as having “all the subtlety of the WWE” and concludes: “It is worth noting that the two sides in this immigration debate are being led by Hispanic Republican senators: Marco Rubio for the Gang of Eight, Ted Cruz for the opposition. One of them, needless to say, is making more sense than the other.”