Their latest charade -- a proposed 20-week national abortion ban -- will never pass. But it reveals so much 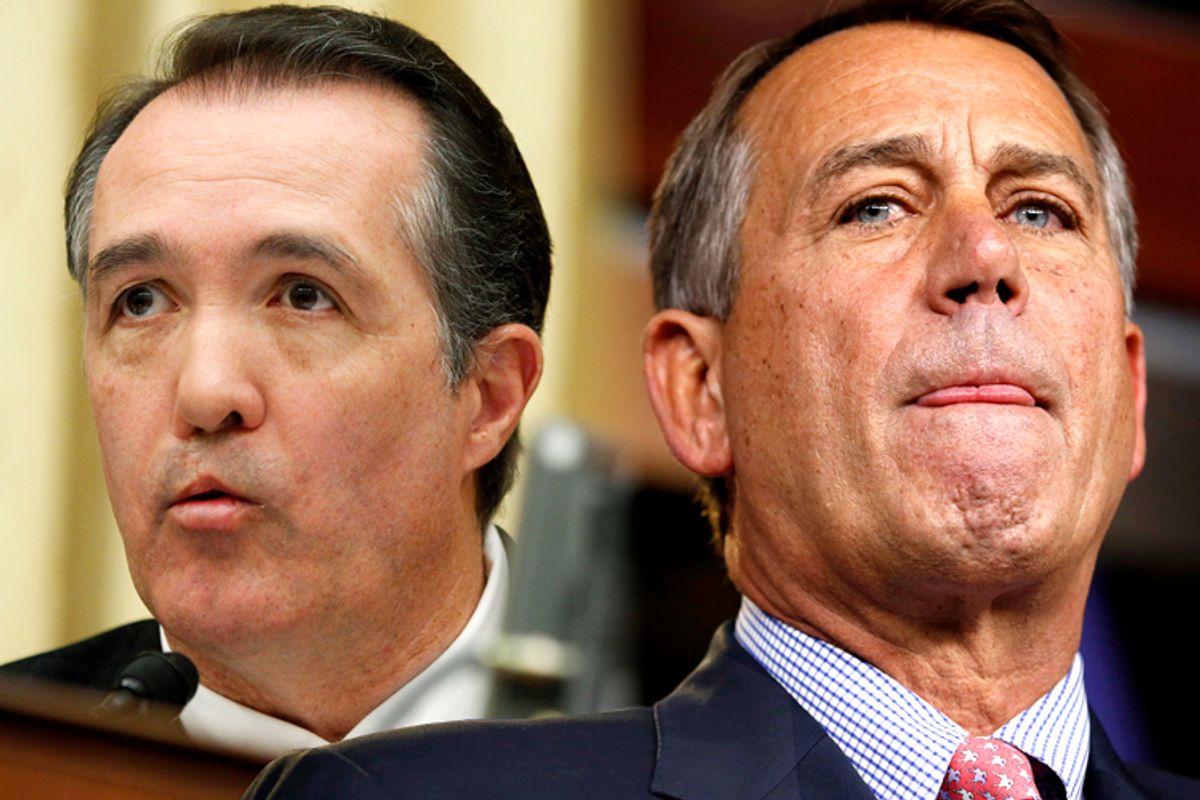 The federal abortion wars are back this week, as the House of Representatives votes on a national ban on abortions after 20 weeks of pregnancy, that is highly unlikely to become law. It’s a charade, one that turns women’s lives into ritualistic political football, and that will never pass muster either at the hands of the Senate, the president or, judging by precedent, the federal courts. But thanks to the upheavals of the past year, it matters a lot, because each side believes it has a newly formed political advantage on the issue: Democrats because Republicans have trouble with women voters and can’t stop talking about rape, Republicans because later abortions are unpopular and because of Kermit Gosnell.

Until recently, you could have reasonably thought House Republicans had declared a temporary cease-fire on the barrage of bills limiting access to birth control and abortion. Even before the trouncing of Todd Akin -- native son of this very uterus-concerned House -- and Richard Mourdock, John Boehner had set up a 20-week abortion ban for the District of Columbia to fail, with a two-thirds vote threshold.

But last week, Boehner was asked what the point is of passing a bill in the House -- this time, with a national scope -- that will never become law. (The question was about abortion, but it could have been about just about anything passed in his House.) Boehner replied, “Listen, jobs continues to be our number one concern, and while we continue to be focused on this, there are other important issues that we have to deal with. After the Kermit Gosnell case and the publicity that it received, I think the legislation is appropriate, and I hope those who have voted against such proposals in the past will change their minds.”

In other words, circumstances have changed, or at least Boehner has managed to be convinced by the restive base that they have. Over the weekend, former Rep. Marilyn Musgrave of the Susan B. Anthony List was crowing, “This is a time for the pro-life movement like we have not had in decades.”

The same day as Boehner’s remarks, conservative reporter John McCormack also invoked Gosnell, trying to goad Nancy Pelosi into saying what the difference was between what Gosnell was accused of and what Trent Franks’ bill bans.

She wasn’t particularly coherent in her answer. (“You’re taking the extreme case. You’re taking the extreme case. And what I’m saying to you is what happened in Philadelphia was reprehensible.”) Pelosi might have said that a 20-week ban on abortions means a cutoff time well before viability, and that there is a difference between the termination of a fetus dependent on a woman and a baby born alive who can live on its own. Or that abortions that take place later in pregnancy usually involve distressed circumstances, whether medical or personal, and some will always be needed, but if you want fewer of them, you should support better access to abortions earlier in pregnancy, which many women say they want.

She did say, “I want to tell you something. As a mother of five children — my oldest child is 6 years old the day I brought my fifth child home from the hospital — as a practicing and respectful Catholic, this is sacred ground to me when we talk about this.”

That could mean a lot of things, but one reasonable interpretation is that Pelosi, as a woman who has been pregnant at least five times, thinks pregnant women’s decision-making about their lives is sacred ground and shouldn’t be a political cudgel. Or that she, a mother of five, shouldn’t be accused of condoning murder.

Competing with the Gosnell/infanticide narrative was the highly resonant one of Republicans being insensitive to rape survivors, which Trent Franks did nothing to dispel by resisting a rape exception to his ban and declaring, "The incidence of rape resulting in pregnancy are very low." A rape exception was quietly added on Friday, not before American Bridge PAC launched a site, It’s Not Just Akin, with a chart of smiling Republican faces and their views on rape exceptions, declaring, “Even if they don't talk about it the same way, the shocking views expressed by Todd Akin are shared by many others in the Republican Party.” No wonder presidential hopeful Marco Rubio was apparently pretending not to know who Franks was.

In other words, this still comes down to a battle about whether abortion is about women’s rights or fetal (or embryonic) rights. The courts are clear on this, at least when it comes to a 20-week ban well before viability: two appeals courts have ruled that 20-week abortion bans in states are unconstitutional. A month ago, the 9th Circuit noted, with no ambiguity whatsoever, “Our question is whether the Constitution permits the Arizona legislature to prohibit abortion beginning at twenty weeks gestation, before the fetus is viable. We hold that it does not.” The law was “unconstitutional under a long line of invariant Supreme Court precedents.” Of course, by passing such laws in state after state -- Texas appears to be next -- right-to-lifers hope to force the Supreme Court to break with that "invariant" precedent. In the meantime, elected representatives will settle for political theater.