With a new Fox contract and sharp words on immigration, the former Alaska gov. is the smiley face of white backlash 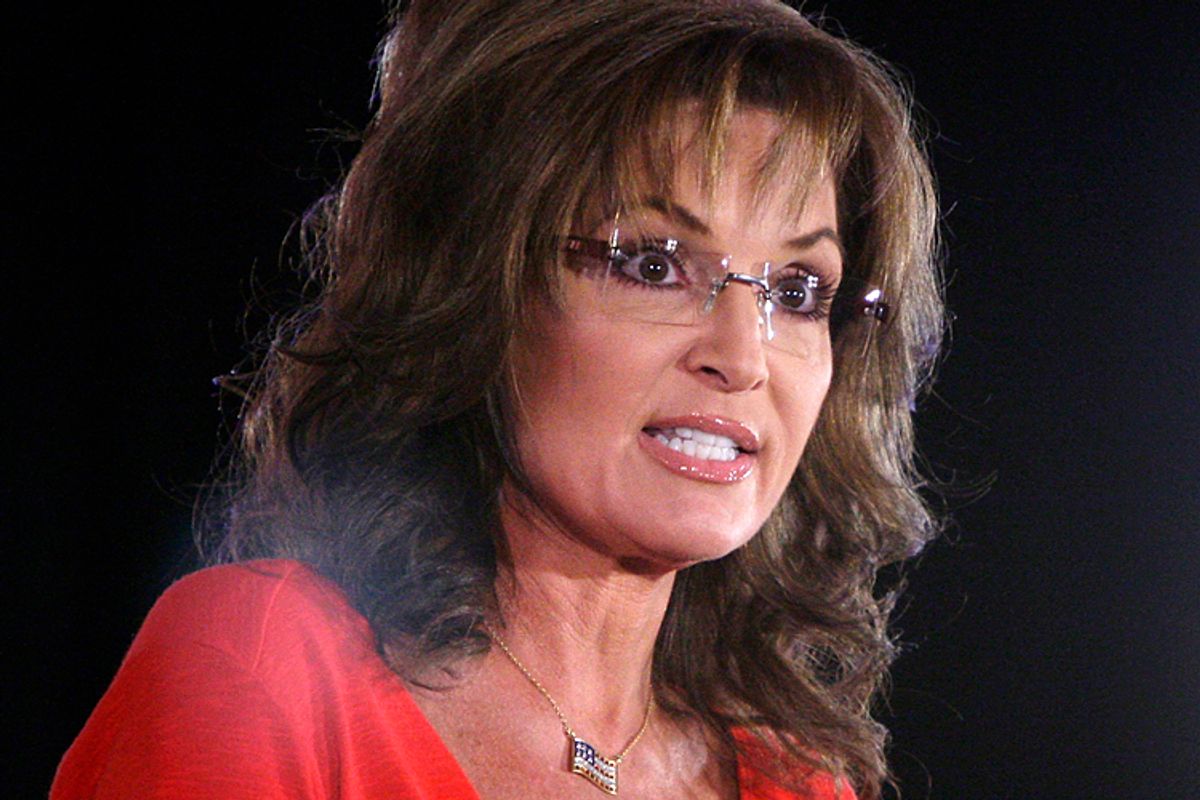 Sarah Palin is back! Not only did she get another Fox News contract, she was the star of Ralph Reed’s Faith and Freedom Conference this past weekend for her slashing attacks not only on President Obama and Democrats but on Republican sellouts (and 2016 hopefuls) like Jeb Bush. Watching Palin gleefully take on Bush, who made a dumb comment about needing immigration reform because immigrants are “more fertile” than native-born Americans, I realized that Palin’s star really is rising again, at a time of heightened racial insecurity on the white far-right. They need a hero, and here she is again.

I stopped paying much attention to Palin around the time she self-destructed by trying to make herself the victim after the attempted assassination of Rep. Gabrielle Giffords and the shooting of 18 other people in Tucson, Ariz., in January 2011. After that, not only my attention but others’ seemed to drift away. She declared that she wouldn’t run for president, surprising no one, her spots on Fox News became less frequent (to her loud complaints) and, ultimately, the right-wing network didn’t renew her contract (though it was stated as her choice; she was going on to better things). I thought maybe Palin didn’t matter anymore.

But she continued to be the big crowd-pleaser at conservative gatherings from CPAC to the NRA convention, where she mocked Mayor Michael Bloomberg’s anti-gun politics by slugging a Big Gulp, taking on the whole elite, effete nanny state her admirers imagine threatens them. Still, it was her attack on Bush this weekend that made me realize the extent to which she could become the face of the white nativist backlash, which is a dangerous development for the GOP, and the country, but a cushy, natural perch for Palin.

Bush, you probably heard, made a dumb play for conservatives to support immigration reform by claiming older white America needs their … babies. “Immigrants are more fertile, and they love families, and they have more intact families, and they bring a younger population,” the former Florida governor told Reed’s convening on Friday. Alex Seitz-Wald noted immediately what a mistake that was: Bush was stating some of the very reasons that the far right opposes immigration reform. And he did it the same day we got the news that deaths among native-born whites were outpacing their births. Way to rub it in, Jeb!

Well, Palin rubbed Bush’s nose in his mistake, trashing him ideologically while using her trademark sex appeal. You kind of have to see it – her hair has never been bigger, and she mocked Bush with such visible self-confidence and self-satisfaction:

It’s dangerous, touchy territory to debate this over one race’s fertility rate, and I say this as one who’s kind of fertile herself. I don’t think that’s where we want to go in deciding how we will incentify [sic] the hard-working families who want to be in the line, follow the law and become American citizens, versus those whose very first act on American soil is to break the law…

Note that Bush didn’t mention any specific race as being either more or less fertile. Native-born Americans of every race tend to have fewer children than immigrants. It was Palin who perceived an insult to the fertility of white people – and who had to therefore remind us of her own. Some white women might be committing "race suicide," in Teddy Roosevelt’s famous words, but Palin ain’t one of them.  Palin even brought up race right at the beginning of her speech, talking about how she likes to confront people with Obama bumper stickers on their “itty-bitty little purple Volts” (and you know what else must be “itty bitty.”)

One reply I got before the 2012 race – one said, ‘Well, I’m not a racist so I voted for [Obama] to prove it,’ and I replied ‘Nor am I a racist, and hey buddy, next time vote for someone else to prove you’re not a knucklehead.'

Palin also mocked Muslims, for good measure, while declaring her opposition to intervention in Syria, insisting we should stay out of a civil war there “and let Allah sort them out.”

Palin’s return to Fox shows that Roger Ailes knows the GOP can’t win back the White House in 2016, so he may as well focus on consolidating his audience, and keeping them comfortable as they watch the further decline of what Bill O’Reilly called “the white establishment" that was vanquished by Barack Obama. "I have great confidence in her and am pleased that she will once again add her commentary to our programming," Ailes said. "I hope she continues to speak her mind.”

Interestingly, Ryan Lizza has a new piece in the New Yorker (it's not online yet) about the "Gang of Eight’s" immigration reform negotiations, and one factor some think will contribute to immigration reform is that Ailes and Rupert Murdoch support it, and the tone from Fox, especially in prime time, has been softer. By adding Palin to his roster Ailes will give some encouragement to the anti-reform side.

Palin will make her re-debut with Ailes’ network on Fox and Friends Monday morning. We'll see if she talks up her fertility again.