Ai Weiwei on his incarceration: "They never looked away from me, 24 hours a day” 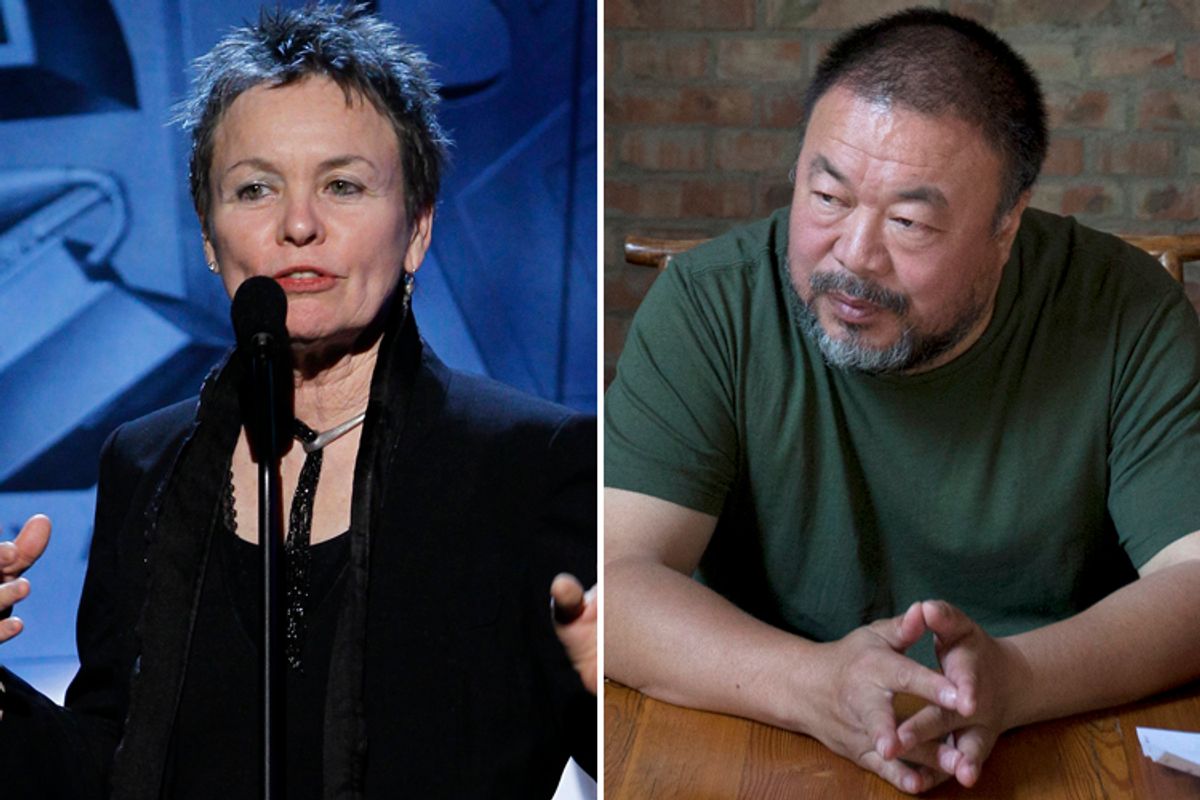 On Sunday night, a cheer broke out across Toronto’s David Pecaut Square as Laurie Anderson called out, “Let’s hear it for the whistle-blowers!” The three men she singled out from the stage – Julian Assange, Bradley Manning and Edward Snowden – all pasty-looking, unlikely Robin Hoods of classified information, are acquiring the cachet of rock stars. So too is Chinese dissident artist Ai Weiwei, now a rebellious rocker himself: his debut album, "The Divine Comedy," is released this weekend. As part of Anderson’s one-off performance, "Greetings to the Motherland," Weiwei’s stern face was projected, via Skype, onto three giant screens in front of a crowd of 3,000, as he and the spiky-haired performance artist engaged in a “duet/rant” about their respective homelands: China and the country that Anderson calls “something that they found on the way to China.”

Snowden’s enforced move to Hong Kong provided a dark, timely context to the performance; backstage, after the show, an “exhausted” but gleaming-eyed Anderson admits, “I admire him. I know [what he did] is whatever – illegal – but look at the kind of discussion it’s opened up.” Not that Anderson is trying to tell anyone what to think: She chose to present the work in Toronto, whose Luminato Festival commissioned it, in order to find a “neutral area” – easier said than done, given the long reach of the NSA. In a somewhat parodic call to action, she repeatedly announced the White House’s direct telephone number, asking people to call in and give their opinions on the Bradley Manning trial (while giving out as much information as possible about themselves and their friends): Is he a hero or a traitor? It was clear where the crowd’s sympathies lay.

Anderson and Weiwei complemented each other in a kind of free-form political rap over a break-beat loop offset by the nervous textures of a three-piece band, including hyperactive Deerhoof drummer Greg Saunier. They reached similar ends by different means: Anderson’s approach was wry and direct (“Welcome to the Internet. Who knows how it became the new dragnet?”) and Weiwei’s generally terse and imagistic (“The land grows poison. Dead pigs float on the river”).

Via Skype, Weiwei spoke briefly and poignantly about his father, the poet Ai Qing, who was exiled from the ‘50s to the ‘70s to a village where he was forced to clean toilets: “He made the cleanest toilets in the world … He could not get rid of the flies.” He described his own 81-day incarceration in 2011 for tax evasion -- a tortuous episode he spoofs in the video to his new single, “Dumbass” -- which involved two soldiers standing “eight centimeters away” from him in a small room and carrying surveillance to its illogical extreme: “They never looked away from me, 24 hours a day.” Weiwei was accused of “subversion of state power” because of his blog posts and tweets. Anderson muses that “the cultures are more similar than we had thought. When those two leaders [President Obama and China’s Xi Jinping] got together, they were both accusing each other of cyber-spying and hacking, and both sides are really good at it, so there’s a big standoff.”

The duo were prepared in case Weiwei’s feed was cut off by the Chinese authorities -- “We tried to expect anything,” says Anderson -- although, in fact, the only difficulties were technical. When the Skype link periodically went down, she looped in snippets of recordings of Weiwei’s rapping from rehearsals (“No one has a voice. No one has a ticket”). As odd as it was to see the New York Times-ordained “high priestess of multimedia technology” struggle with unreliable communication, one could empathize.

Anderson is bemused by what she sees as younger Americans’ apathy toward surveillance: “A lot of people are like, ‘I’m not guilty; if they want to look at my chatting to my friends, why would I care?’ A lot of kids feel that way; privacy is not a thing. For me, coming from another era, it is. It’s funny ‘cause I say very personal things in a very public way sometimes” – her 2010 show "Delusion," for instance, detailed her fraught relationship with her mother – “but I like to be able to decide which is which.”

So does she want to galvanize people into rebellion – or at least action – through her music? “I’m kind of shocked that there’s not very much galvanization around, but I think people are also preoccupied. Instead of the Occupy movement, you’re pre-occupied. Just keeping up with your email – it’s overwhelming to also try to participate in social dialogue. Plus there’s a stigma against it: ‘Well, what’s your grudge about?’”

Projections in "Greetings to the Motherland" quoted the White House’s website: “President Obama is committed to creating the most open and accessible administration in American history.” Once, Anderson had declared herself “a big Obama fan”; now, she says she’s “disillusioned with his policies.” Anderson’s onstage rant also touched on genetically modified foods, the gun lobby and assassination via drones: “You might be high on the hit list, the president’s wish list. He can hit you, knock you out of the park. He can kick you way out into the dark, ‘cause lately that’s justice, American-style. Sentenced to death without a trial.” Weiwei, rapping in Mandarin at the end, was similarly blunt about Chinese leadership: “The throats are rotten. The bosses are retarded … Oh China! If you’re still sleeping /Crushed to death as you come.”

And while "Greetings to the Motherland" reflected Anderson’s view of current events as “pretty dark,” there’s a lighter side to her approach: As the artistic director of New York’s new River to River Festival, she has said that she plans to launch a “fleet” of tiny, harmless drones above Rockefeller Park on Tuesday and Wednesday to create a “magical” experience. Indeed, not all, for her, is doom and gloom: In Toronto, when asked about her husband, Lou Reed, who had a lifesaving liver transplant in May, she smiles broadly: “He’s doing really, really well.” And when listening to Weiwei describe his incarceration, she’s reminded of how lucky she is to be able to speak her loyal dissent: “I’m really happy to be an American citizen. I treasure my right to say things like this. They’re not throwing me in jail, I hope.”