From "Bling Ring" to Oprah, "The Secret" lives on

In this era of class immobility, the self-help book looks less relevant than ever -- but don't count it out yet 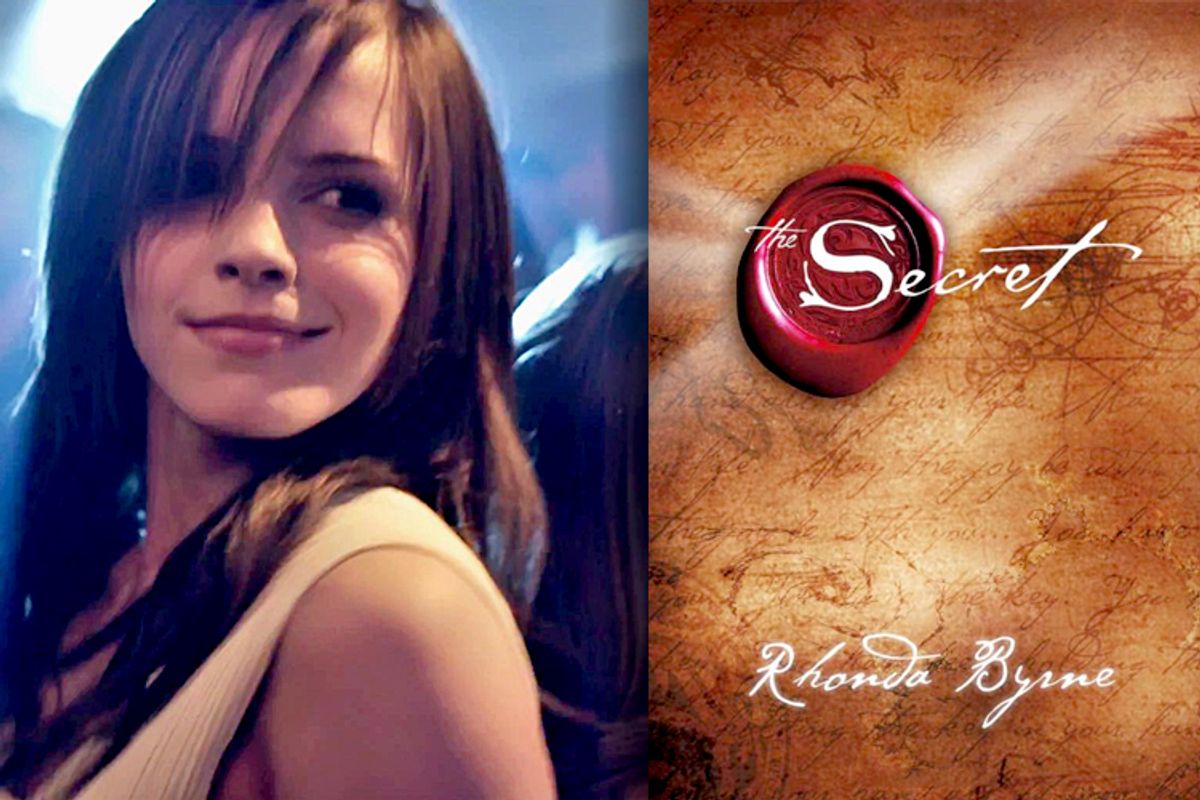 In 2006, Rhonda Byrne's self-help book "The Secret" took the world by storm. It was utterly inescapable, selling millions of copies, spawning a movie, and earning the devotion of Oprah Winfrey, all upon the premise that persistent and focused visualization could bring the ardent follower huge rewards.

Time hasn't been kind to "The Secret," though; the philosophy has gone from hot new thing to object of fun. The new film "The Bling Ring," about a group of teen criminals, treats one family's devotion to "The Secret" as an uproarious joke. The characters, based on real-life Bling Ring member Alexis Neiers' family, reenact sequences from the reality show "Pretty Wild," in which the matriarch, Andrea Arlington, home-schools her children on the subjects of visualization and vision boards. They focus on Angelina Jolie in order to adopt her traits. It's very funny -- and utterly ludicrous. Director Sofia Coppola doesn't let you forget that these people are comical.

And in his book "The Unwinding," George Packer depicts the New Age philosophy of Winfrey not merely as risible but as yet another piece of evidence that the nation has gone badly awry. Winfrey got everything she ever wanted, she claims, because of the power of her visualization. Where does that leave society's less fortunate -- did they not want it badly enough?

"The Secret" has tapered off from its peak as a publishing industry sensation and the talk of the nation -- it's the third-most-popular book on Amazon in "Occult" but only No. 170 overall, compared to the dizzying early heights that prompted the New Yorker to attempt to pour cold water on the franchise. But, though it may be a punch line now, it's far from past.

"'The Secret' was old wine in new bottles," said Benjamin Radford, the deputy editor of the science magazine Skeptical Inquirer and a prominent critic of Byrne's work. "While 'The Secret' itself as a book and as a phenomenon has waned, its underlying premise, the Law of Attraction -- which sounds like a scientific law but it's pseudoscientific -- is very much alive, particularly in the New Age crowd."

Byrne has acknowledged that "The Secret" is inspired by "The Science of Getting Rich," a 1910 self-help book, still in print, that encouraged readers to focus their thinking on wealth. (The official "The Secret" Web page offers e-book downloads of the older tome.) While "The Secret" added elements of quantum physics, Radford said, the general theme of success or failure hinging on thought was nothing new.

"One of the interesting facets of this mentality is that it keeps reviving itself," said Radford. "In skepticism we have what we call rubber duck syndrome. The rubber ducks at the carnival, when you push them down with a stream of water, they pop right back up." Indeed, despite Alexis Neiers' imprisonment and struggles with addiction, her mother still identifies with "Secret"-inflected beliefs, sharing tenets of the visualization-based New Thought movement and descriptions of "vibrational directors" on her personal Facebook page.

"'The Secret' will hopefully die a quiet death after it's made millions for Byrne and her publisher," said Radford, "but there's nothing new here."  This despite recent studies indicating "positive self-statements" can adversely affect the self-esteem of unhappy people and that fantasizing about a happy future may sap the will to achieve.

But elements of "The Secret" and of the Law of Attraction are baked into American life. As Packer noted: "In its popularized form, it includes everyone. The message is that no matter how low you start, no matter how far back you begin, you can be something if you believe in yourself."

Though Winfrey cited an extraordinary case of upward mobility in her recent commencement speech at Harvard, Packer believes the basic tenets of "The Secret" are no longer relevant. The Law of Attraction, he argued, relied on a social system where "upward mobility is a constant incentive being dangled in front of you. The problem is we don't live in that America anymore. Upward mobility is lower here than in Europe -- that's a big change."

So perhaps the mocking attitude "The Bling Ring" evinces is a sign of the times; when "The Secret" fails the young girls who want to become Angelina Jolie, they steal celebrities' clothes for themselves. Oliver Burkeman, the author of "The Antidote: Happiness for People Who Can't Stand Positive Thinking," suggested that the moment may be nigh for a slight retrenchment in magical thinking, if not its complete disappearance:

You can only get away with believing that stuff when everything, economically, appears to be going really well and when things start to unravel people might respond to that unraveling by clinging to that thinking. And when things are going really badly they take solace.

In a time marked neither by the go-go economic boom of the mid-2000s nor the deep economic insecurity immediately after the stock market crash of fall 2008, "The Secret" has less currency than ever. While it may well be revived, perhaps this is a moment when Americans are looking at their situations with clearer eyes.

Or perhaps not. As Daniel Simons, co-author of "The Invisible Gorilla: How Our Intuitions Deceive Us" and professor of psychology at the University of Illinois, told Salon: "What happens when devotees of a cult -- how do they react when the world doesn't end? The typical finding is their beliefs actually strengthen. Whatever they were doing to prevent the end of the world actually worked. You can always find a way to support your beliefs."

Witness the singer Melissa Etheridge recently declaring that her bad thoughts had given her cancer for proof-positive that alongside a peculiar optimism in American life runs a paranoid fantasy of controlling one's own reality with thought. "It's like a fixed experiment," said Packer. "If it doesn't work you haven't had the right attitude, you haven't followed the steps faithfully. It has its own proof -- like many religions."

Byrne herself said "The Secret" would, within "decades or even years," be rewritten for a new generation; in the interim, it may settle into a spot outside the limelight, becoming just another thing many people believe without topping any bestseller lists.

The Law of Attraction is with us to stay, even if its popularity oscillates. Said Burkeman: "Anyone standing on the promenade saying you can become a billionaire with your thoughts will always have allure to some."