GOP's war on women has a new face: Marsha Blackburn 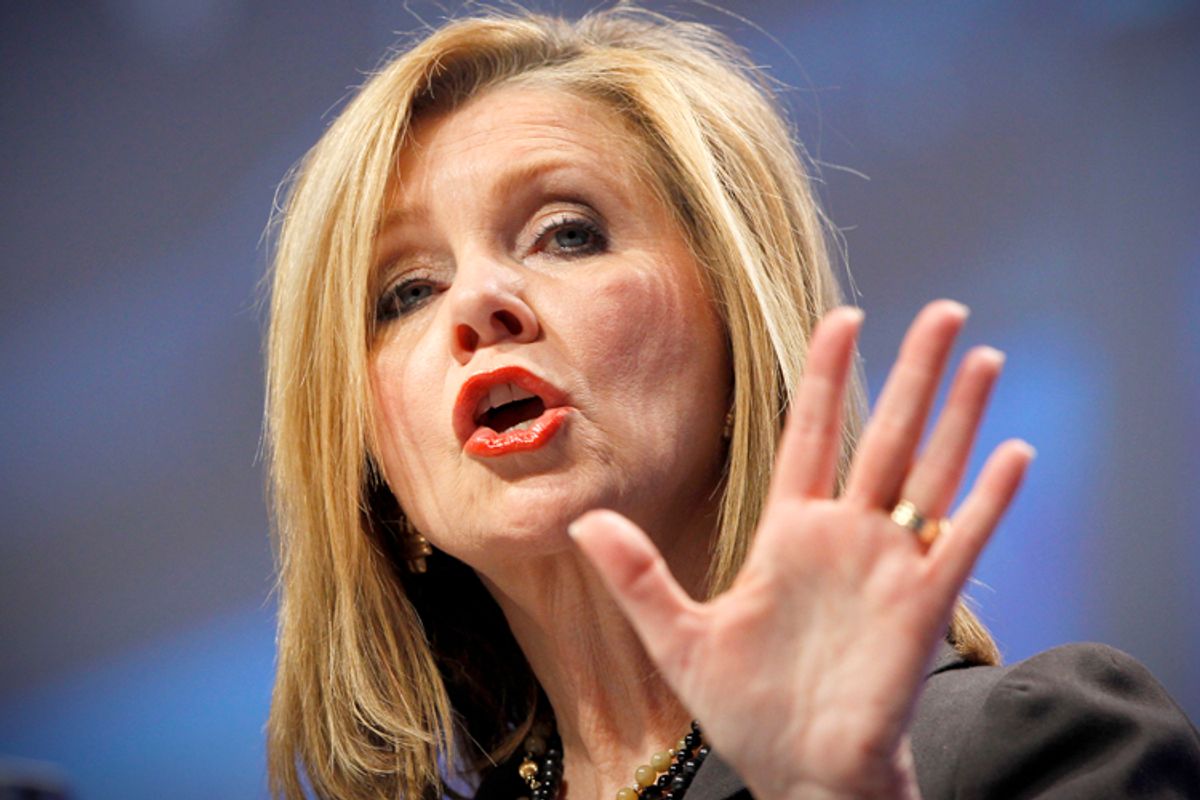 Tennessee Rep. Marsha Blackburn happily stepped up and took over the House GOP’s post-20 week abortion ban from Trent Franks this week, after Franks made his ignorant comments about the bill not needing an exception for rape victims, because "the incidence of pregnancy from rape is very low." Franks certainly didn’t help the party with its post Todd Akin outreach to women voters.

Blackburn would seem to be an odd choice to help Republicans improve their popularity with women. On “Meet the Press” just two weeks ago she made headlines by insisting women “don’t want” equal pay laws (she of course voted against the Lilly Ledbetter fair pay act.) Now she’s insisting that the House GOP’s anti-abortion bill is meant to help women, too. While it now includes an exception for victims of rape and incest, it will only apply to women who have reported those crimes to police, when a majority of survivors do not.

On MSNBC Tuesday morning, Blackburn tried to explain to an incredulous Craig Melvin that the measure is designed to help women, because it will “rid our society of these perpetrators who carry out these crimes, many times repeatedly.”

Republicans are using the hideous Gosnell case to revive their anti-abortion crusade with a pro-women twist. Blackburn threw all kinds of bogus statistics and junk science at Melvin, who fought back by noting that the American Medical Association and other major physicians’ groups have weighed in and denied the claim that fetuses can feel pain before roughly 24 weeks, the same age at which they are usually considered viable.  Blackburn acted like she didn’t hear him, continuing to blithely insist, “This is one of those issues where science is on our side, public opinion is on our side.”

Blackburn only got rattled when Melvin asked whether, given the fact that the ban won’t pass the Senate, and the president has said he’ll veto it if it did, the bill represented “pandering” to the far right GOP base. Blackburn exploded. “Is saving the lives of women and babies pandering? Absolutely not! I can’t believe you would say something like that!”

I can’t believe Republicans think putting a woman’s face on their anti-women policies is going to trick women into voting for them. Blackburn should have disqualified herself for her new public role when she claimed women “don’t want” pay equity on “Meet the Press.”  Of course, her opposition to equal pay laws puts her squarely in the mainstream of the GOP. Texas Gov. Rick Perry just vetoed his state’s version of the law (following in the footsteps of Wisconsin’s Scott Walker), while Florida Gov. Rick Scott vetoed a bill to provide workers with paid sick leave, which disproportionately benefits women.

But it was Blackburn’s claim that women themselves don’t want equal pay laws that made her special. Here’s what she said:

You know, I’ve always said that I didn’t want to be given a job because I was a female, I wanted it because I was the most well-qualified person for the job. And making certain that companies are going to move forward in that vein, that is what women want. They don’t want the decisions made in Washington. They want to be able to have the power and the control and the ability to make those decisions for themselves.

That’s funny: women actually want the power to make decisions for themselves in all areas of their lives, especially when it comes to their health – but that’s one kind of power Blackburn thinks belongs in Washington.