The wife of John McCain wins a prize for supporting the gay community. Were actual gay people busy that night? 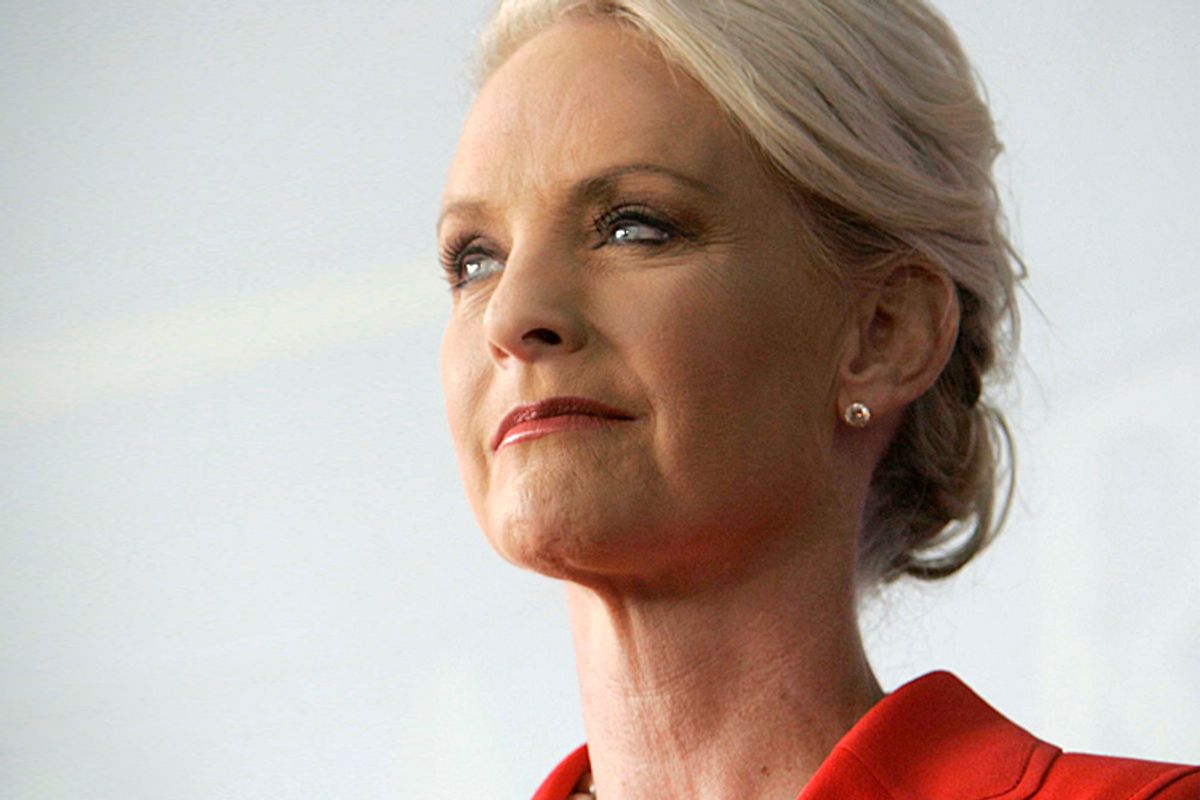 This week, Cindy McCain came to New York to pick up her Trevor Hero Award, an award from the gay youth crisis center the Trevor Project to honor someone who's supported the gay community. For five consecutive years, the prize went to an openly gay celebrity (including the playwright Tony Kushner and the Broadway star Nathan Lane); in the past three years, the Trevor Project has honored "Harry Potter" actor Daniel Radcliffe and pop singers Lady Gaga and Katy Perry, the songstress behind not-exactly-sensitive hits like "Ur So Gay" and "I Kissed a Girl."

Clearly, the organization is aiming to open the tent to broadly famous individuals; Cindy McCain, who's posed for a "NO H8" photo and spoken publicly about her support of gay rights, may not exactly have done as much as the writer of "Angels in America" on behalf of gays, but the parallel-universe-first lady may be more of a marquee name.

Michael Bronski, the Professor of the Practice in the Studies of Women, Gender, and Sexuality at Harvard and author of "'You Can Tell Just By Looking': And 20 Other Myths About LGBT Life and People," told Salon: "National lesbian, gay, bisexual and transgender organizations are committed to promote acceptance, but they're also committed to fundraising. Cindy McCain gets a lot of coverage in the mainstream media. Would you be doing this story if the award went to a gay activist from Minneapolis?"

Even so, given the funds that Ms. McCain's presence at an awards ceremony, along with that of her pro-gay daughter Meghan might drive to a very worthy cause, it struck Bronski as somewhat surreal that McCain was to be honored for a photo shoot and a public comment.

"It's pandering, to use an ugly word, to the most common level of what it means to get support," he said. "Cindy McCain has said a few things in support of same sex marriage that seem to me to fall under the rubric of supporting basic civil rights. Some people don't do that, like her husband. But have we reached the point where national groups are rewarding people for doing low-level basic common decency? Thanks for not kicking us in the head again!"

Linda Hirshman, a lawyer and activist and the author of "Victory: The Triumphant Gay Revolution," took a more sympathetic view; allies like Cindy McCain, she said, are important to changing minds on a fluid issue and shouldn't be excluded for their minor-key activism or for their ties to Republicans. "I myself am personally very radical," Hirshman said, "but I believe that the gay revolution came from a place of such stunning marginalization and disempowerment that you couldn't possibly make those changes. There are social movements that could make radical change; the gay revolution shouldn't be criticized for not doing it all at once."

The award is particularly surprising for the fact that it's going to someone who is of politics but not in politics -- many Democratic senators, and even a Republican in the form of Ohio's Rob Portman, are in favor of same-sex marriage equality, unlike John McCain. They might have been available for an evening in New York! But, Hirshman said, Cindy McCain has some symbolic weight.

Comparing the gay movement, on which opinions are still changing, to the calcified discussion surrounding abortion, Hirshman noted: "In the gay revolution, I don't think all the work of rhetorical change has been done yet. These powerless but culturally iconic figures like first ladies can help the movement. They are adding a patina of respectability to a movement that was disempowered."

After all, it's not as though the gay movement is in a position to turn away anyone, liberal or conservative, who's willing to pose for a photo shoot or speak out, at whatever level of commitment. "We welcome Cindy McCain's participation in the movement. Hopefully she can persuade others in her party. She's a passionate advocate and not one to worry about rocking the boat, or leading the way. We need more Cindy McCains," wrote Richard Socarides, White House adviser under President Clinton and gay-rights advocate, via email.

But, despite her apparent draw as a Trevor Project figurehead and her ability to get reporters (this one included) typing, there's one thing Cindy McCain hasn't been able to do yet on behalf of the gay community. "If she had real power," said Bronski, "she would've already changed his mind." If his wife's words can't change John McCain's mind, though, the Trevor Project should get in touch: A kind word or two would immediately get the senator a prize to add to the McCain trophy shelf.