What everybody gets wrong about Orwell 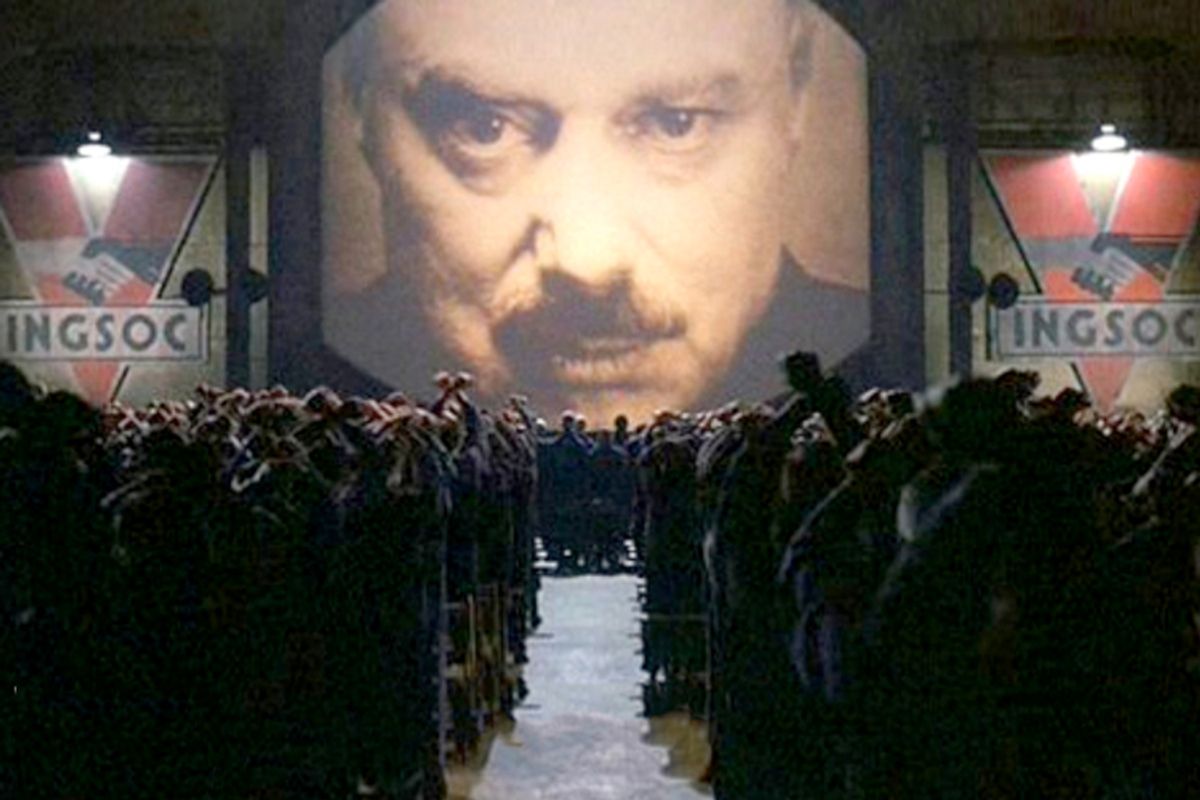 As commentators and pundits have weighed in on the (not entirely surprising) revelation that electronic surveillance has flourished during the Obama administration, words and phrases like "Orwellian" and "Big Brother" have abounded, while Amazon sales of "Nineteen Eighty-Four" have climbed a staggering 7000 percent. On MSNBC, Vermont Sen. Bernie Sanders warned against the “very Orwellian and inhibiting impact” unfettered surveillance will have on our lives; Megan Garber of the Atlantic called Boundless Informant, the National Security Administration’s nickname for one of its data-mining tools, “Orwellian”; Eric Benson and Frank Rich have derided the “Orwellian excess” of the Patriot Act. Even the New Yorker’s Ian Crouch, though he points out that “we are far from the crushing, violent, single-party totalitarian regime of Orwell’s imagination,” found Obama’s initial response “vaguely Big Brotherian.”

It’s ironic that Orwell’s name should now be synonymous with the very forces he spent his life writing against, as though they were somehow his ideas and not the bleak reality of Soviet Russia and Nazi Germany at the time. It’s a fate entirely attributable to "Nineteen Eighty-Four," which has long been used superficially in debates about propaganda, totalitarianism, surveillance, central planning and so forth. The right-wing pundit Glenn Beck, to give just one example, invokes Orwell’s novel in his conspiratorial sermons about big government so often that it should give anyone now making the comparison pause. More often talked about than read, it isn’t surprising to find that "Nineteen Eighty-Four" is once again much on people’s lips, if not exactly on their minds.

Today "Nineteen Eighty-Four" seems more historical than futuristic; an imagining of what England might have looked like if a totalitarian regime had triumphed. So many of the novel’s details -- the food rationings, the razor shortages, the smell of boiled cabbage -- speak to its time, while the nature of the party is overtly Stalinist (purges, secret police, big mustaches). As D. J. Taylor notes in his biography of Orwell, “the appeal – and the resonance – of 'Nineteen Eighty-Four' to many of its original readers stemmed from the fact that it depicted a world that, by and large, they already knew.”

What few comparisons one might draw between the world of "Ingsoc" and contemporary America would have to be so cripplingly superficial as to be practically useless. Surveillance of citizens in "Nineteen Eighty-Four" is done so overtly that posters reminding you of the fact are displayed everywhere, whereas the NSA’s en masse mining of metadata is performed in such secrecy that even members of Congress admit to being baffled by it. Nor is there anything “Orwellian” about the nickname Boundless Informant, as Megan Garber claims. If anything, the name is embarrassingly straightforward. (Was that really the best they could do?)

This isn’t meant to suggest that Orwell is not relevant to the current debate about the politics of electronic surveillance. Clive James once wrote that "Animal Farm" and "Nineteen Eighty-Four" were just the bark of Orwell’s writing and that his journalism was the tree. Perhaps if sales of his "Collected Essays" had soared as much as "Nineteen Eighty-Four" people would realize how wrongheaded the comparison of the NSA to Big Brother really is -- and how much more Orwell has to contribute to contemporary debate than just "Big Brother" and "Newspeak." When NSA director James Clapper said he’d responded “in the least untruthful way” to Congress in March by telling them that the NSA does not intentionally collect any data of American citizens, Orwell’s famous definition of political language — that it is “designed to make lies sound truthful and murder respectable, and to give an appearance of solidity to pure wind” — seemed particularly apt.

The relationship between politics and the English language, as the title of that famous essay goes, was a lifelong preoccupation of Orwell’s, and in "Nineteen Eighty-Four" it found only extreme expression (naturally, given the extreme nature of the story). Early in the novel, Winston Smith is having lunch with the philologist Syme, who is at work on the Eleventh Edition of the Newspeak dictionary. “It’s a beautiful thing, the destruction of words,” the zealous Syme intones and, picking up on Winston’s indifference, reproaches his colleague:

“You haven’t a real appreciation of Newspeak, Winston,” he said almost sadly. “Even when you write it you’re still thinking in Oldspeak. I’ve read some of those pieces that you write in the Times occasionally. They’re good enough, but they’re translations. In your heart you’d prefer to stick to Oldspeak, with all its vagueness and its useless shades of meaning. You don’t grasp the beauty of the destruction of words. Do you know that Newspeak is the only language in the world whose vocabulary gets smaller every year?”

A paragraph later he asks Winston if he can’t see that “the whole aim of Newspeak is to narrow the range of thought,” and shortly after speaks approvingly of the coming destruction of the literature of the past (Chaucer, Shakespeare, Milton, Byron). Rereading the novel I felt annoyed with Orwell for beating his readers over the head with such an obvious point (i.e., that the destruction of words is not a beautiful thing) -- annoyed because, in essays like “Politics and the English Language” and “The Prevention of Literature,” Orwell was far more subtle and, as it turns out, prescient.

In chaotic times, Orwell believed, “one can probably bring about some improvement by starting at the verbal end.” Is it naive to think so today? There are good reasons to be skeptical of Orwell’s equation of plain language with clarity of thought (is “insincerity” really the great enemy of clear language?), but only bad reasons to pretend that the way in which things are said or written doesn’t matter. “Political language has to consist largely of euphemism, question-begging and sheer cloudy vagueness,” Orwell wrote, and that seems no less true today than it did in 1946. Surely Orwell would have been impressed by the vision of the NSA as stated on its website: “Global Cryptologic Dominance through Responsive Presence and Network Advantage.” Or by CIA Director Brennan’s “remotely piloted aircraft” whose “targeted strikes” adhere to such principles as “proportionality – the notion that the anticipated collateral damage of an action cannot be excessive in relation to the anticipated concrete and direct military advantage.” Or, better yet, the definition of “humanity” as a principle consonant with the use of weapons that do not inflict “unnecessary suffering.”  The moral disengagement reflected in this type of language deliberately clouds the reality behind it — and in the Internet era, it is unthinkingly adopted and spread even (or especially) by major news outlets allegedly dedicated to the same journalistic mission as Orwell. In other words, we have no need for an officially sanctioned Newspeak dictionary: We are disseminating the debased language voluntarily.

It’s the same with surveillance. In its contemporary form, it is far more insidious; with no overarching single-party State, culpability is extended to the various companies and corporations that ordinary citizens, no doubt foolishly, entrust with heaps of private information. Whatever else the NSA leaks can tell us about government surveillance, we need to consider the question of how much independence we are willing to relinquish in order to be plugged in all the time. George Packer, writing on the New Yorker’s website, rightly said that “it’s sinister when Big Brother is watching you, but it’s even more sinister when Big Brother is you, sharing.”

To read “Nineteen Eighty-Four” and discover its world has little in common with our own is thus to be misled twice over. First by expecting to find some parallel to our contemporary situation and, second, by thinking that if the NSA is not Big Brother we have nothing to worry about. Orwell knew better. In the essay “The Prevention of Literature,” written a few years before “Nineteen Eighty-Four,” he differentiated between two threats to intellectual liberty: “On the one side are its theoretical enemies, the apologists of totalitarianism, and on the other its immediate, practical enemies, monopoly and bureaucracy.” Terrorism is a constant threat to an open society, but so are those internal forces tasked with our protection that operate either in total secrecy or for profit motive. “The conscious enemies of liberty are those to whom liberty ought to mean most,” Orwell wrote — an unpleasant fact if ever there was one.