Mega gun shows have an odd literary side and a secretly thriving self-publishing side. The books are pretty bizarre 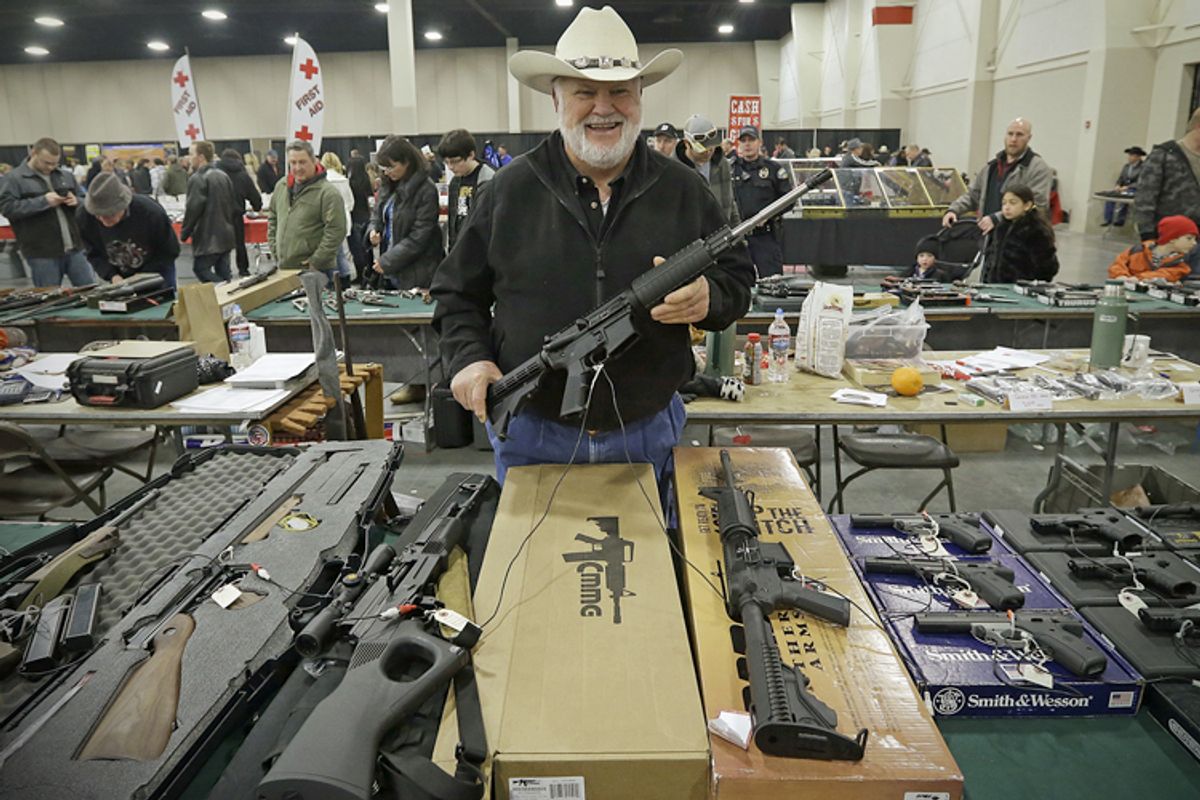 Who goes to the gun show looking for literature?

Recently, I was on assignment to write about America’s biggest weapons showcase: The Knob Creek Machine Gun Shoot. The last thing I expected to find was interesting reading material.

But first let’s confirm something you might be wondering: Yes, just about any adult with a functional trigger finger can buy a serious gun, even nerds like me. Had I been so interested, my mostly clean criminal record (See: Loitering conviction, 1998) wouldn’t have stopped me from stuffing an AK-47 into the back of my Honda Civic.

That’s not my type of journalistic research. Since I struggle to tell a Howitzer from a Ronco Rotisserie Cooker it wasn’t a surprise that I was drawn to the more ephemeral wares at the firearms extravaganza, in particular, the book sale.

No, not the thick tomes of military history or firearms manuals. I’m talking chapbooks.

Chapbooks are slim volumes that can often be found for sale at coffeehouse poetry readings or crammed into the bookshelves of nerds like me. They do not fly off shelves. I had previously associated them with the sort of people who might translate Proust. But at Knob Creek I learned that they also have a beachhead among people who might get their kicks blowing up a speedboat with an Uzi. (This really happened at Knob Creek.)

Chapbooks are normal sheets of printer paper folded in half to make a tidy booklet. Some are professionally bound, but really anyone can get into this racket overnight. In recent years, as printing costs have dropped, many have featured glossy covers rivaling anything in hardback.

They’re sort of the Kindle single of the analog age.

Inside a chapbook, you might find some of the most exciting work in publishing. Intimidatingly strong prose, penetrating poetry or — like my personal favorite chapbook, "Wish You Were Me" by Myriam Gurba — generous helpings of WTF? In the lit world, there is something not-so-safe about chapbooks. The material is not meant for the masses and likely will never be published by a major house. These twee little books are kind of thrilling in that regard.

Imagine my surprise when I stumbled onto a thriving chapbook culture while surrounded by hollow-point bullets and guys spitting tobacco into Mountain Dew bottles. The gun show’s book booth was four tables long and jammed with racks of chapbooks.

The first title that caught my attention was “Poor Man’s Ray Gun.” Its wavy sci-fi cover and slim page count felt like it could be a screed of avant-garde poetry. Instead, it was filled with technically dense instructions and diagrams. It’s an instruction manual for converting a microwave oven into a death laser.

I flipped through more chapbooks. The covers weren’t as Madison Avenue as “Ray Gun,” usually featuring just a primary colored shade of construction paper. Their titles, though, were more threatening than any chapbook on my shelf:

I didn’t need old or new approaches to chucking a knife into someone’s sternum, but was fascinated all the same. The authors, like the people who wrote the chapbooks I have at home, presented the illusion that they were offering a library of clandestine, dangerous writing.

This chapbook knowledge probably isn’t all that secret. A quick Internet search might unveil dozens of techniques for war zone tonsillectomies and homemade bomb-making. But the fact that someone went to the trouble to print this out gave it a more dangerous aura than a Tumblr for backyard dynamite enthusiasts. This information was off the grid.

I leafed through a few dozen chapbooks and discovered they rarely contained author information. What publishers were listed on the back covers sounded like shell companies: Butokukai Books and Desert Publications, among others. I actually tried contacting Desert Publications afterward to get the scoop on its history, but all interview requests were not returned. To my mind, this only adds to the cloak-and-dagger allure of its chapbooks.

Chapbooks peaked in the 1960s.

It’s easy imagining college coeds obsessing over chapbook poetry tracts or pamphlets on Black Panthers or brassiere burning best practices. Nowadays, the immediacy and portability of the chapbook has been replaced by, well, everything.

When my kind of literary chapbook is released in 2013, it is through eccentric indie presses, like Keyhole or Future Tense. Some of them are excellent. Just recently one of my favorite producers of chapbooks (and book-length books), Mud Luscious Press, closed its doors. Financially speaking, it’s not hard to figure out why.

Chapbooks are too short for book lovers. They are too long for Twitterers. There’s not much nudity to speak of. No matter how brilliant the writing, chapbooks reek of Kinko’s and paper cuts and unprofessionalism.

Like a nerdy reporter at a gun show, chapbooks simply don’t fit in.

Back at the gun show I thumbed through one explaining ways to discreetly add arsenic to a dictator’s minestrone.

The chapbook table was run by a large woman with permed blond hair and a simple white church blouse. She didn’t look like she had much need to beat a lie detector. But there she was, helping the rest of us. As far as I could tell, she was the only vendor there not offering a single item that could fire a bullet. I took comfort, knowing only a fellow chapbook geek would be so misguided at a firearms thunderdome.

I handed the woman $15 for “The Big Book of Secret Hiding Places” and prepared to make a soul connection.

“So,” I cleared my throat. “Do you guys publish these books yourselves?”

Brilliant! Certainly she would smell a fellow geek. We’d share a deeper understanding of our two cultures, maybe go halfsies on a new microwave and zap somebody with it.

“No,” she said. “We buy ‘em from all over.” She slipped my book into a CVS sack and went back to helping guys spitting Skoal into soda bottles.

She was gone before this reporter-supreme could even ask what she meant by “all over.”

There was a strong urge to hunt through my new book and see if it gave any tips on hiding oneself at a gun show in order to weep. It didn’t. “Secret Hiding Places” was, however, packed with hints like how to sneak high-caliber shells into a shower curtain rod and how to hollow out a loaf of bread for stashing dope.

My feelings were hurt, but then again it wasn’t all that unfamiliar.

The Knob Creek firearms swap meet was similar to literary conferences I had attended. This encounter was not unlike speaking to a socially awkward poetry publisher at AWP. Nerds who covet dangerous writing seem to all be this way — whether it be minimalist prose or homemade fireworks. You’d think it would be easy to bond, but for some reason we express our outgoing sides through the questionable books we buy.

Weeks have passed since the Knob Creek Machine Gun Shoot. However, I still can’t operate a microwave without seeing that blond woman’s face and wondering, “What if?”