Is the government screwing pornographers? 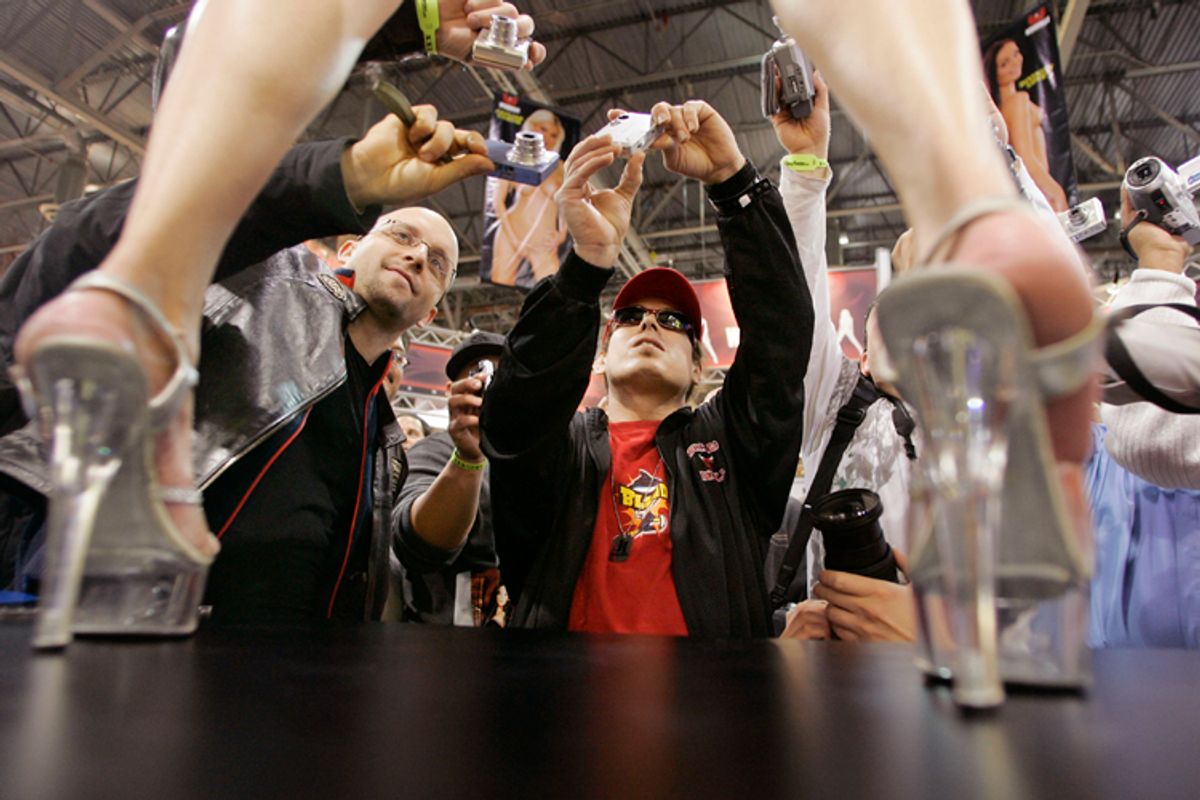 It takes up only a couple of seconds of screen time: a dry legal notice claiming that all performers are over 18 years of age and that proof is kept in such-and-such location. This wankus interruptus is mandated by the Child Protection and Obscenity Enforcement Act, which requires rigorous record keeping for all producers of "sexually explicit" content as a means of both identifying and preventing child pornography. This burden on pornographers might not seem an issue of great national import, but the Free Speech Coalition says that the requirements, otherwise known as 2257 Regulations, violate the Constitution. That’s why the organization -- along with individual plaintiffs who work in porn and sex education -- has taken Attorney General Eric Holder to court.

Thing is, this isn’t just relevant to people whose work intersects with sex. Jeffrey J. Douglas of the Free Speech Coalition tells me that because this law is overly broad, "every person who engages in 'sexting' images" violates it. Which is to say: EVERYONE AND THEIR MOM IS BREAKING THE LAW. Of course, 2257 is rarely, if ever, used to target people outside of the porn industry -- but that doesn’t change the fact that the law itself might permit it, he says. "Whenever the government is allowed to engage in systematic violations of the Fourth Amendment" -- which protects against unwarranted searches -- "everyone is at risk,” says Douglas.

The chief complaint among pornographers is that the requirement presents a logistical nightmare. "A person must be available 20 hours a week for the FBI to perform inspections of the records," Douglas explains.  "Many record keepers are private, non-commercial individuals who must make their home available for warrantless inspections without notice." What's more, "all records must be cross-referenced a minimum of four ways, often as many as 10 or more," he says. Even "mis-alphabetizing a single name is a felony." Accidentally swap Diamond Foxxx with Jillian Foxxx and you’re screwed.

It forces many businesses to "have at least one half-time position dedicated solely to 2257 compliance" and "costs the industry millions of dollars yearly," he says.

Douglas argues that it was "designed to trap otherwise lawful businesses into engaging in felonious conduct" and calls it "a unique abomination among the tens of thousands of regulatory schemes under federal law."

The law also impacts people working in the realm of sex education. Octogenarian sexologist Betty Dodson and sex educator Carlin Ross host an educational website featuring a “genital art gallery” aimed at helping “adult men and women work through shame related to the look of their genitalia,” as the suit puts it. Originally, they allowed people to submit anonymously, but in order to comply with 2257, they began requiring submitters to include copies of photo identification. Suddenly, the submissions came to a screeching halt.

Ultimately they had to remove approximately 2,000 images from the gallery because they weren’t able to obtain identification from the anonymous submitters. “The statute therefore wholly suppressed this valuable and socially significant body of expression,” argues the suit.

“Artistic” photographers -- the quotes are there because the line between pornography and art is crazy-subjective -- are impacted too. Dave Levingston, who published the photography book “The Figure in Nature,” and largely takes nude photography for “expression, not for commercial purposes,” isn’t able to maintain records for his work. “For each shoot, he takes between 2,000 and 3,000 photos,” explains the suit. “The cost of maintaining copies of each image and an index and cross-reference as required by the regulations is prohibitive.” The photographer travels frequently and can’t be around the required 20 hours per week for potential governmental inspection of his records.

So, he’s stopped taking photos that might be subject to 2257. The government, the suit argues, has effectively censored his art.

To be clear, none of the plaintiffs are arguing that it’s unreasonable to expect producers of “sexually explicit” material to only work with adults. All parties are agreed on the fact that child pornography is bad. It's that the plaintiffs argue the law imposes an undue burden on producers of this material all in the name of "detect[ing] and deter[ing] child pornography," says Douglas, when in reality "it cannot do either." He explains, "The tiny number of underage persons who snuck their way into the adult industry in the last thirty years all had fraudulently acquired but otherwise valid identification issued by the government. There is not a single example of 2257 deterring illegal conduct or facilitating the detection of a minor performing in the industry." In essence the argument is that not only is the law excessive and unconstitutional, but that it's also ineffective.

Kathryn Wyer, a Department of Justice attorney, argued in court Monday that the sex educators -- presumably the most sympathetic of the plaintiffs -- had simply misunderstood the requirements of 2257. “All that is required is that you check the ID of everyone,” she said, according to XBiz. Of course, the argument of the plaintiffs is that the law, which you can read in its entirety here, is dangerously subjective. Perhaps a happy medium will be found, as hinted at by Judge Michael M. Baylson, who is expected to arrive at a decision sometime next month. “Such a compromise,” reports XBiz, “might involve getting rid of the elements of 2257 that the plaintiffs find to be the most objectionable and difficult to comply with without throwing out the entire law.”