What if we demanded Ted Cruz's papers?

Canada-born senator wants to require documentary evidence of citizenship for voting. Maybe he should think again 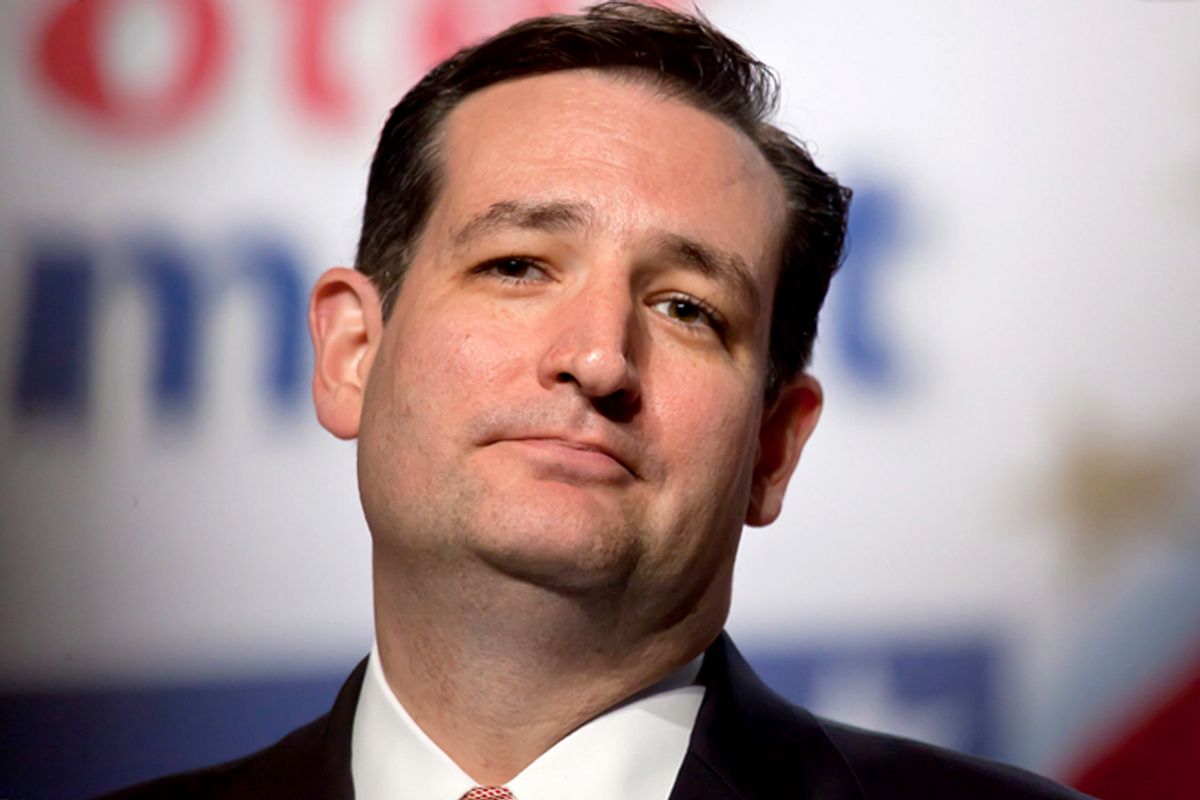 Sen. Ted Cruz (R. Tex) is very unhappy about this week’s Supreme Court ruling, which held that Arizona cannot demand “documentary evidence” of United States citizenship as a condition of registering to vote in federal elections. The ruling has opened a “hole” in the law, he says, that will allow “non-citizens to register and thereby encourages voter fraud.” He has therefore vowed to “file a commonsense (sic) amendment to the immigration bill that permits states to require I.D. before registering voters."

This raises a fascinating question. How would Cruz himself go about providing “documentary evidence” of his own citizenship?

As it happens, he was born in Canada, where his parents were working at the time. Thus, his birth certificate cannot provide any such proof. And because he claims citizenship by birth, he would never have had any reason to obtain a certificate of naturalization. According to Cruz’s official website, however, his mother was born and raised in Delaware, which is quite sufficient under the law to confer citizenship on Ted – if we take his word for it. On the other hand, what if we demanded the fabled documentary evidence?

I suppose Cruz could produce his mother’s birth certificate as well as his own, thus establishing his descent from a citizen.  Alas, things are more complicated than that.  Cruz’s father is a Cuban émigré who was not yet a U.S. citizen when Cruz was born in 1970. Thus, Cruz himself falls under a special section of the Immigration and Nationality Act that governs “Birth Abroad to One Citizen and One Alien Parent.” Under that provision, Cruz only qualifies for citizenship if his mother was “physically present” in the United States for ten years prior to his birth, five of which had to be after she reached the age of fourteen. How is he going to document that?

Now, I do not doubt that Cruz’s mother lived here most of her life. She graduated from Rice University in 1956, so that’s obviously four years right there.  But we’re not talking about things that are obvious – at least if Cruz succeeds in passing an amendment restoring the Arizona law – we’re talking about documentary evidence.  So it would not be enough to assume that Cruz’s mother lived in the United States for at least ten years, we would need some proof.  Maybe school registration records or utility bills.

Or perhaps Mrs. Cruz could simply provide an affidavit, explaining that she lived in either Delaware or Texas until she turned nineteen. While that would be adequate under a system such as the National Voter Registration Act, it would not constitute documentary evidence. Remember, it is the sufficiency of affidavits that Arizona objected to in the first place (and which Cruz calls an invitation to fraud).

Well, what about Cruz’s own passport? Wouldn’t that just cut through the whole mess, since passports are only issued to U.S. citizens. Sorry, but we again run into that sticky evidence problem. Because Cruz lacks a U.S. birth certificate, he could only have gotten a passport by establishing those same complicated underlying facts about his mother’s early life.

And how would he have done that? According to the State Department, he could have provided a statement from his “U.S. citizen parent detailing all periods and places of residence or physical presence in the United States and abroad before [his] birth.” (Cruz might alternatively have submitted a “Consular Report of Birth Abroad,” but that would also have rested on his mother’s statement of residency.)

In other words, Cruz’s passport was supported by one of those suspect affidavits; you know, the sort that are deemed completely untrustworthy for voting purposes by the Arizona legislature. In fact, Cruz’s citizenship-proving passport would only have needed a “statement” from his mother, rather than the stricter averment “under penalty of perjury” as required by the NVRA and the Supreme Court. So sure, a passport is a document, but it can’t be any more reliable than the unsworn statements that produced it.

Sen. Cruz would probably get very upset if anybody questioned his mother’s word, but that is just the point. Eleanor Darragh Cruz is no more inherently credible than an average person. If her simple statement was sufficient to confer citizenship on her foreign born son, then a similar statement ought to be enough to allow an aspiring voter to register in Arizona or Texas.

Of course, there is no real reason to doubt Ted Cruz’s citizenship, and I do not want to suggest otherwise. But that does not mean it would be easy for him to provide actual documentation if anybody demanded that sort of proof – especially if we disallowed the averments of his mother. To be sure, Cruz is a remarkably driven individual – highly successful at a young age – who could no doubt dig up as much accurate evidence as needed to maintain his Senate seat.  Ordinary people, however, will usually lack Cruz’s knowledge, time, and resources.  Even a passport costs $165.  How much effort and expense is it reasonable to demand from folks who only want to vote?

As a legal matter, you might think it is obvious that Congress would set the standards for federal elections, as in fact it did when passing the National Voter Registration Act of 1993 (NVRA). And that is just what the Supreme Court held, in a 7-2 opinion that was written by Justice Antonin Scalia. As Scalia put it, in Arizona v. Intertribal Council,  the Constitution gives Congress the authority “to provide a complete code for congressional elections [including] regulations re­lating to ‘registration.’” And because the NVRA calls only for an affidavit of citizenship, Arizona could not tack on an additional requirement of further documentation.

As for Cruz personally, the fact is inescapable that his citizenship – solid as it is – ultimately rests on his mother’s say-so. That’s plenty good enough for me, and it is evidently quite good enough for the United States Senate. I only wish Sen. Cruz would recognize as much when it comes to letting other people vote.