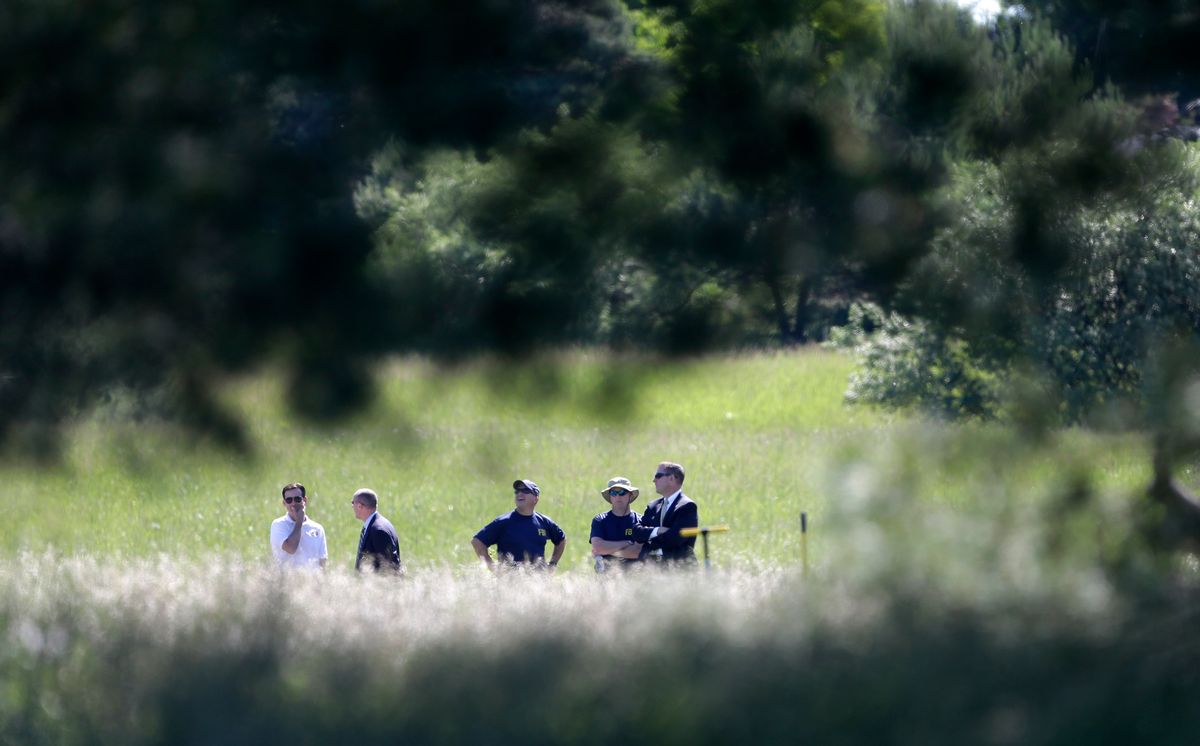 Investigators look over the scene in Oakland Township, Mich., Monday, June 17, 2013, where officials search for the remains of Teamsters union president Jimmy Hoffa who disappeared from a Detroit-area restaurant in 1975. (AP/Carlos Osorio)
--

OAKLAND TOWNSHIP, Mich. (AP) — Beneath a swimming pool, under a horse farm and now a weed-grown field north of Detroit. For at least the third time in a decade, FBI agents grabbed shovels and combed through dirt and mud in the search for Jimmy Hoffa's remains or clues to the disappearance of the former Teamsters boss.

Once again, the search was futile.

"Certainly, we're disappointed," Detroit FBI chief Robert Foley told reporters Wednesday as federal and local authorities wrapped up another excavation that failed to turn up anything that could be linked to Hoffa, who has been missing since 1975.

Many people interested in the mystery assume Hoffa ran afoul of the mob and was whacked.

"Right now the case remains open," Foley said. "At this point, if we do get logical leads and enough probable cause that warrant the resources to do an investigation, then we'll continue to do so."

The latest search for Hoffa's remains was prompted by a tip from reputed ex-Mafia captain Tony Zerilli. About 40 FBI agents searched a small field surrounded by trees and a gravel road in Oakland Township. With the aid of a backhoe, they spent about 10 hours in the field Monday and another 10 Tuesday before calling it quits about 10:30 a.m. Wednesday.

"We're always hopeful that we'll get a lead that will lead us to a position in which we can conclude this investigation," said Foley, "both for the process of justice but also for the family."

Hoffa was last seen on July 30, 1975, when he was to meet with reputed Detroit mob enforcer Anthony "Tony Jack" Giacalone and alleged New Jersey mob figure Anthony "Tony Pro" Provenzano at a restaurant in Bloomfield Township, north of Detroit. The 62-year-old Hoffa never was seen or heard from again.

His rise in the Teamsters, his 1964 conviction for jury tampering and his presumed murder are Detroit's link to a time when organized crime, public corruption and mob hits held the nation's attention.

In 2003, authorities dug beneath an underground pool at a home in Michigan's Thumb area for a briefcase an informant said contained a syringe and possible evidence that Hoffa might have been injected with drugs or poison.

In 2004, detectives pulled up floorboards at a Detroit house, and last September, authorities drilled for soil samples in the floor of a shed in the Detroit suburb of Roseville.

Other theories have suggested Hoffa was entombed in concrete at Giants Stadium in New Jersey, ground up and thrown in a Florida swamp or obliterated in a mob-owned fat-rendering plant.

Zerilli, now 85, was in prison for organized crime when Hoffa disappeared. But he told New York TV station WNBC in January that he was informed about Hoffa's whereabouts after his release. David Chasnick, Zerilli's lawyer, has said Zerilli is "intimately involved" with people who know where the body is buried.

The makeshift grave, according to Zerilli, was in a barn beneath a concrete slab in the Oakland Township field. The barn is gone, but the slab remains.

"At the end of the day, everything Zerilli said is credible — whether (Hoffa's remains are) still there and they missed it or not," Chasnick told The Associated Press Wednesday afternoon. "He knew about the barn. He knew about the cement."

Chasnick said Zerilli still is convinced that whatever remains of Hoffa can be found somewhere among the high grass, thickets and crickets.

"I'd like to put a final nail in the coffin — that they searched the whole field. There is always an open-ended question."

Foley said agents pored over about an acre in their 2 ½-day search. The effort included help from forensic anthropologists at Michigan State University and Michigan State Police cadaver-sniffing dogs.

"We did not uncover any evidence relevant to the investigation on James Hoffa," Foley said. "I am very confident of our result here after two-days-plus of diligent effort."

Hoffa's son, James P. Hoffa, is the current Teamsters president, and union spokeswoman Leigh Strope said family members "do hold out hope that they will one day learn what happened."

Detroit FBI spokesman Simon Shaykhet said Wednesday that there was no connection between the dig for Hoffa's remains and an excavation Tuesday at the house in New York once occupied by gangster James Burke. Burke, a Lucchese crime family associate known as "Jimmy the Gent," was the inspiration for Robert De Niro's character in the 1990 Martin Scorsese movie "Goodfellas."