James Gandolfini and the rush to the first tweet 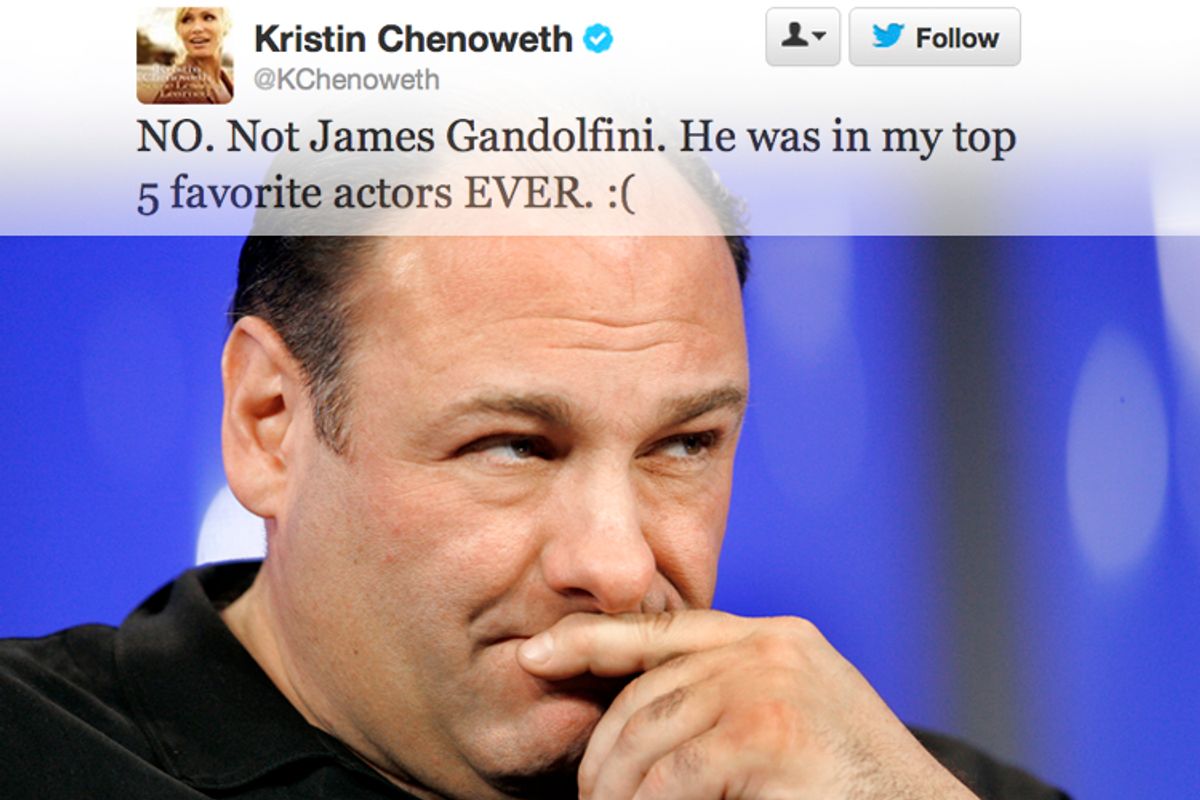 The news that "The Sopranos" star James Gandolfini -- such an important figure in the American imagination even six years after his run on television ended in a New Jersey diner -- has died is particularly hard to grasp. The actor was young, 51, with what sounds like great screen work ahead of him. And it's impossible to overstate the influence of his performance as Tony Soprano.

But as the news broke last night, the sadness and shock fans expressed online began to feel, well, a little like a contest, both to be first and to feel the most.

Celebrity deaths have always been, for lack of a better word, weird, merging the abstract sadness of lost potential with the directness of having "known" the departed in some way into an uncanny feeling of the loss of a friend. But the memories you share of the deceased aren't personal -- other than the circumstances of where each viewer watched, say, Gandolfini's performances in "The Sopranos" or "Zero Dark Thirty" or "True Romance," the memories are exactly the same as everyone else's.

So in order to convey a sadness that is personal, that is real, many people used Twitter to try to defeat the medium's ephemerality, to declare their devotion even while some were questioning whether the death was a hoax. It wasn't what Gandolfini did on-screen that was so special about him; it's that he was my favorite (or, at least, one among them).

Naturally, every Twitter user was trying his or her best to metabolize a shocking turn of events (leaving aside those who made cruel jokes). Even so, there was a performative aspect to the grief, as though the person who was Gandolfini's biggest fan would win something.

As these things go, individuals with little clear connection felt compelled to comment on the news, to say something, anything, in order to remain relevant -- even a political tangent or a strangely timed joke about the 2007 "Sopranos" finale. If one didn't say anything, it was as though one didn't feel anything about something that was, empirically, deeply sad, and that had been established (in part through the many tweets from news organizations, including this one) as the night's trending topic.

There's probably nothing to be done about the public performance of grief, and nothing really wrong with it; compared to the hysteria at Rudolph Valentino's funeral, for instance, a Twitter outpouring seems rather tame. But perhaps the best way to honor a star whose particular integrity, on-screen and off-, is among his most notable characteristics, would be to treat his passing without the sort of hyperbole that a stream of keening tweets engenders, the sort that's so ephemeral it fades away as soon as the reader hits refresh. To perhaps take a moment -- or a day or two -- to figure out what, precisely, an already universally lauded career meant to you in details or moments, without quantifying your sadness with time stamps or rankings.