The end of sockeye salmon? 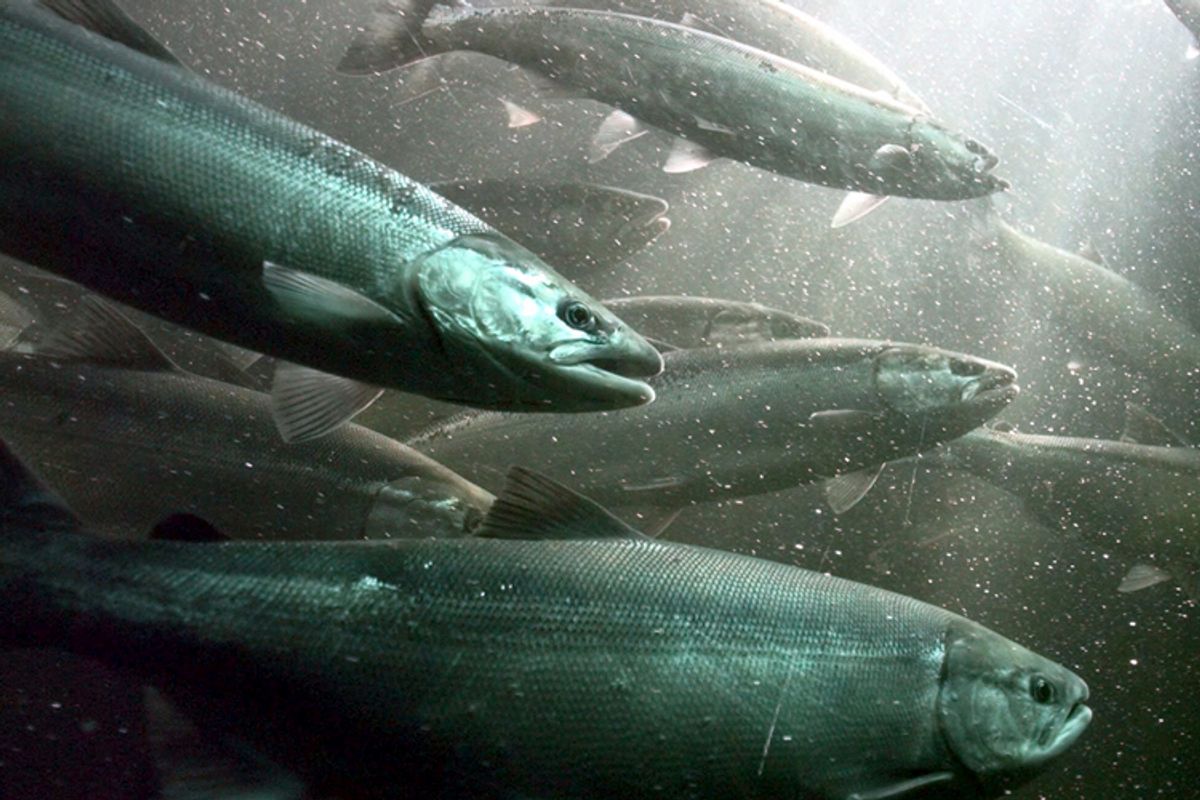 The habitat for half the world supply of wild sockeye salmon -- as well as a critical area for other wildlife, tourism and native peoples -- is at urgent risk of being filled with pollutants, and sterilized in the name of gold and copper mining.

Dillingham is a town of about 2,300 people, perched on an outlet into Bristol Bay, a body of water set between Alaska's southwest coast and the Aleutian islands. The only way in or out is by boat or airplane. The town's economy, and that of almost every settlement along the bay, relies on the thriving salmon population that returns each year to source rivers and streams to spawn.

The fish productivity, and in turn the entire lifestyle of southwest Alaska, is hanging in jeopardy under the looming threat of Pebble Mine. The proposed copper and gold site is projected to be the largest open pit mine in North America and would have a devastating impact on the habitat for salmon and other wildlife.

Verner Wilson III's first memory is of trying to save a fish. The Yup'ik Eskimo, who grew up in Dillingham, Alaska, remembers visiting his family's fishing camp when he was little. “I saw all of these fish wriggling around on the beach,” he says. “I tried to save one, take it and put it back in the water.”

His grandmother stopped him, explaining that the fish were the family's food and livelihood. “I've been fishing ever since,” says Wilson, now 27.

Now Wilson is trying to save a lot of fish. Representing the World Wildlife Fund, he has been traveling the state and all the way to Washington, D.C., to rally opposition to the mine, while an unlikely coalition of commercial, subsistence and sport fishermen alongside environmentalists and native tribes has mobilized to preserve one of the last great salmon fisheries left in the world. “Every single piece of the economy here is tied into fishing one way or another,” says Katherine Carscallen, who also grew up in a Dillingham fishing family. “It's our livelihood and lifestyle that would be completely erased if this mine went through.”

Salmon are born in inland rivers and streams, swim out to live their life in the ocean, then return to the same stream they hatched in to spawn and die. Carscallen, Wilson and thousands of other fishermen are preparing their boats now to hit the peak season in late June and early July as the fish cross the bay on the way to their final destinations. A fleet of 32-foot boats staffed with two to four crew members will be on the water around the clock for a month and bring in close to 30 million salmon in a good year, providing half the world market for wild sockeye in addition to other species.

Ultimately the fishery produces some $1.5 billion in output each year and employs more than 12,000 people down the supply chain. The impact continues outside Alaska, providing income for a network of shippers, packers, processors, shops and restaurants down the Pacific Northwest and beyond.

“Washington receives more economic value from Bristol Bay than Alaska,” says Ben Blakey, a Washington state resident whose family has been traveling north to fish in the bay for 30 years, noting that his state pulls in $580 million and 3,200 jobs from the salmon run, processing the fish on their way to be sold domestically and exported to Europe and Japan.

“I grew up fishing,” Blakey says. “I would hope that my children would also grow up fishing.” Their odds aren't great. If Pebble Mine ever breaks ground, even the best case scenario looks dire. The EPA recently released a draft report that makes the stakes clear: Construction and support of the mine would require an immense amount of infrastructure across land scarcely touched by human hands, from roads to culverts to energy sources to pipelines to a containment dam to hold back toxic mine waste. The development would sit at the headwaters of the Kvichak and Nushagak rivers, damaging two of the nine main feeder sources to Bristol Bay and eliminating at least 90 miles of stream habitat and thousands of acres of protective wetlands.

“Salmon depend on this diverse portfolio of habitat,” says Daniel Schindler, a professor of aquatic & fishery sciences at the University of Washington, comparing the ecosystem to an investment portfolio. If one stock has a bad run, the others should balance out the loss.

“Over the course of time, different rivers seem to be more productive during different time intervals,” he says. “The aggregate is pretty stable because the risk of a bad year in the ocean and freshwater is spread out across all these different watersheds.”

Compromising two rivers and a host of auxiliary habitat in that portfolio, and therefore weakening the overall resilience of the population, is the most favorable possible outcome of the mine's impact, if nothing goes wrong. Were there to be an accident, the consequences could be truly disastrous. And when it comes to mines, there's always an accident.

Extracting minerals from the earth necessarily leaves behind toxic mine tailings, among them dissolved copper and sulfuric acid, better known as battery acid. Porous gravel stream beds and copious wetlands at the headwaters make it extremely difficult to completely contain the toxins.

“We know that acid mine draining will happen at this mine,” says David Chambers, a Ph.D. in physical engineering who works for the Center for Science and Public Participation. “The real issue is can you mitigate it or not.”

Copper is notorious for interfering with fish's sense of smell, which could make it impossible to find their way back to the natal stream, or prevent baby salmon from detecting and avoiding predators. Enough copper, sulphides or other minerals in the water could also kill the fish outright.

All that waste would be held back behind an enormous dam in a tectonically active area. Fifty years or more down the road, when the mine is empty of useful minerals and abandoned, the dam will still stand, expected to contain a deadly mix of chemicals in perpetuity, a ticking time bomb in an earthquake-prone area.

What's more, once one mine and its infrastructure is in place, more are sure to follow. “The record of industrializing a salmon drainage is very clear,” Chambers says. “When that happens you end up losing the salmon at some point.”

Despite years of exploratory work, Pebble Partnership, the would-be developers, have not yet submitted official plans for the state permitting process. Activists worry that the permit would effectively be a rubber stamp, especially considering a series of pro-development bills that have passed or been introduced in the state Legislature over the past several years. “There is no 'no' in the Alaska permitting process,” says Tim Bristol, director of the Alaska chapter of conservation group Trout Unlimited. “Their job is to get to yes for mining development.”

That's why the opposition is turning to the EPA, which has the power to block development through Section 404(c) of the Clean Water Act if the project has “unacceptable adverse effects” on water supplies or fish and wildlife habitat. The agency is collecting public comments on its draft report until the end of June and is expected to issue a final draft in the fall, with a 404(c) decision possible after that.

Pebble Partnership has predictably ripped the EPA draft as inaccurate, biased and based on a “hypothetical mine,” since they haven't finalized their own plans. Curiously, that same hypothetical mine sufficed for Pebble to submit a detailed shareholders report to the SEC, a water rights application to the Alaska DNR and a recently released study promising massive economic benefits to the region and the state.

The projections are rosy: According to their report, the mine would produce $500 billion worth of minerals, bring in $136 million to $180 million in annual taxes and royalties, support 15,000 jobs and increase the GDP by $2.4 billion.

The mine's opponents question the accuracy of the economic forecast, and say the destruction of fish, wildlife, tourism, recreation and culture wouldn't be worth it anyway. Recent polls have found between 51 to 54 percent of Alaskans overall opposed to Pebble Mine, with an overwhelming 82.4 percent of Bristol Bay residents in opposition.

The fishing communities have recognized that once a pristine habitat is ruined, it's gone forever. “We're spending billions of dollars a year on the Pacific Northwest to try to restore salmon to systems that are beyond help,” says Samuel Snyder, director of the Bristol Bay Fisheries and Watershed Campaign for the Alaska Conservation Fund. “Why would we do that in Bristol Bay? We have the chance to not have to restore. Why can't we use history as a guide?”

Pebble Partnership did not respond to request for comment for this story.