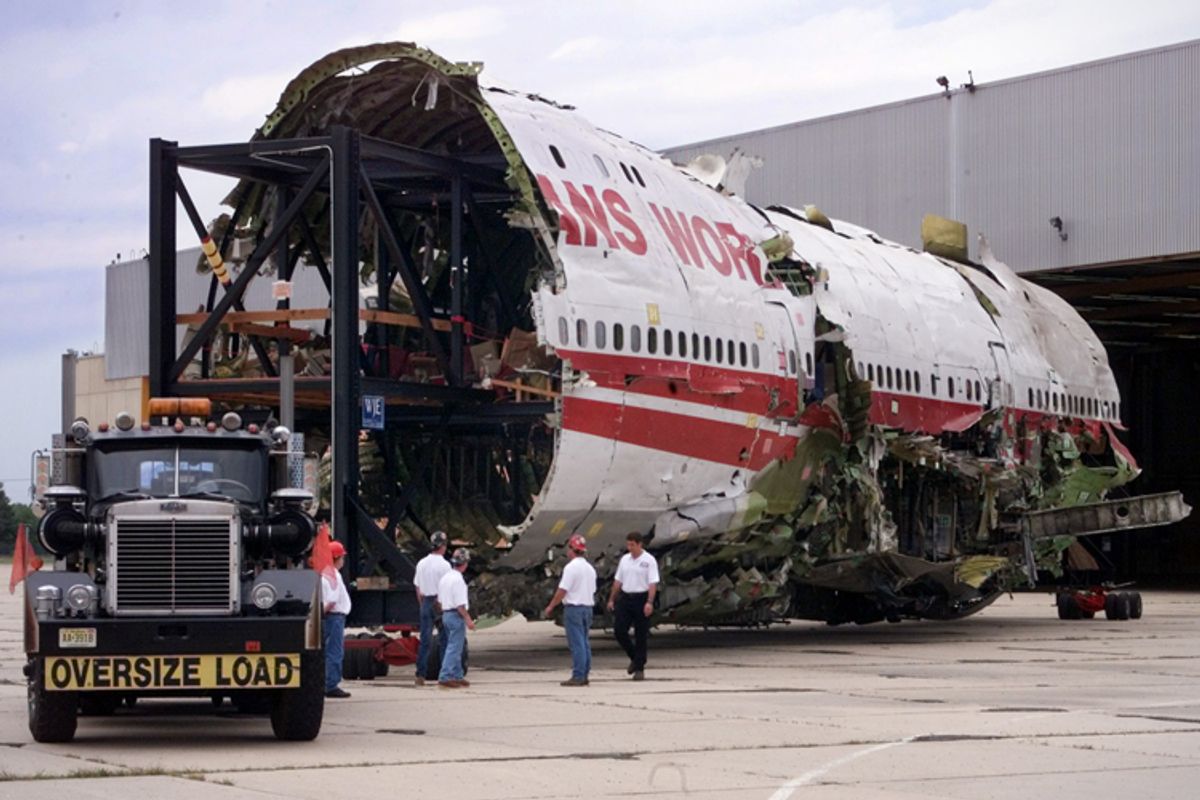 Long before there were Ed Snowden Truthers, there were TWA Flight 800 theorists, way back in 1996. Now the group is having another moment in the sun thanks to breathless media coverage of a new documentary that posits that a missile strike -- and not the fuel tank explosion that investigators claim -- brought down the plane 17 years ago off Long Island in the deadliest airline crash before 9/11. But in treating the assertions as new evidence, the media coverage is overlooking the fact that these claims are at least 15 years old.

For instance, a particularly effusive "Good Morning America" report termed the news "stunning," labeling the six former investigators featured in the documentary "whistle-blowers" and saying they are "breaking their silence" for the first time on the crash. It's just one report of dozens on the documentary, in every major news outlet in the country. The 17-year-old flight is currently the No. 5 trending search term on Google.

But the claims of those featured in the documentary are hardly new. Its producer, Tom Stalcup, is the chairman and co-founder of the Flight 800 Independent Researchers Organization (FIRO), which has been challenging the official investigation since 1999. Stalcup and others filed their petition to get the National Transportation Safety Board to reopen the investigation in 2002, citing much of the same "new evidence" it points to today, as the now defunct conservative magazine Insight on the News reported at the time.

Hank Hughes, the former NTSB senior accident investigator who is the most prominent "whistle-blower" in the film, has spoken publicly on several occasions about his belief that the FBI tampered with the investigation, and even testified before the Senate about it in 1999. He told the hearing convened by Sen. Chuck Grassley that he saw FBI agents tampering with and discarding evidence, entering his hangar in the middle of the night for unknown reasons, and even bringing a psychic to review the wreckage.

The crash can be seen as the grandfather of the modern era of conspiracy, as the first significant one to take hold on "the young but quickly growing Internet," as CNN reported at the time. Empowered by new sharing tools and access to vast amounts of information about the crash, amateur investigators banded together in message boards and chat groups to crowd-source unofficial probes, setting a pattern that would become familiar after 9/11. Fueling the theories was the genuine murkiness of events. Witnesses reported seeing something that looked liked a missile (investigators late determined it was the flaming wreckage of the plane itself) while terrorism seemed possible and wasn't officially ruled out for months.

Most of the "World Wide Web" theories speculated the flight was actually downed by the U.S. Navy -- accidentally or otherwise -- and that government agents influenced the investigation to cover up that fact. The theories gained traction and credibility when former JFK press secretary Pierre Salinger claimed he saw a document (which turned out to be phony) from a French intelligence official implicating the Navy. As Salon's Mark Hunter reported at the time, the theory would be "the most far-reaching and successful criminal conspiracy in the history of the U.S. government," involving hundreds of people on the ship that allegedly fired the missile, eyewitnesses and investigators.

There were countless documentaries, books and other investigative reports about the crash. It even gained some traction among conservatives trying to implicate the Clinton White House. Accuracy in the Media, the conservative media watchdog that helped advance the Vince Foster theory, created its own documentary in the early 2000s on the missile theory.

Former AP reporter Pat Milton, now at CBS News, who spent 11 months at the scene of the investigation and wrote an authoritative book on the crash, dismissed the alternative theories, though she acknowledged that she understands the frustration since "they never found the tell-tale piece" of evidence. Tom Haueter, the former NTSB director of aviation safety, said the evidence supporting the fuel tank explosion was "irrefutable."

This isn't to say Hughes and the others' claims are necessarily wrong or should be dismissed outright, but that media coverage of the new documentary should not treat them as shocking new claims, when they've been around for almost two decades.