What Tony Soprano taught me about motherhood 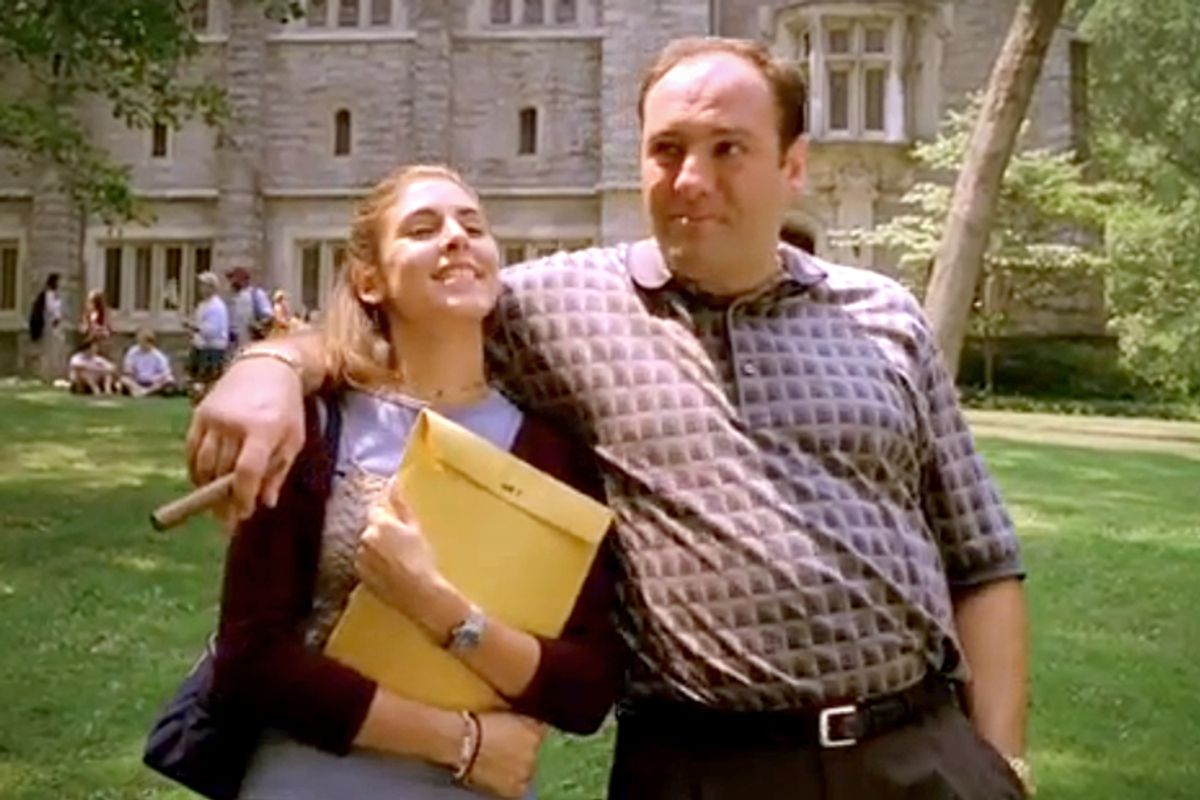 I didn't know James Gandolfini. And when other entertainers have passed, I haven’t necessarily felt like writing about them beyond the respectful tweet or two. But Gandolfini is so intertwined with my recollection of my daughter’s first year that I often can’t think of her as a baby without thinking of him.

She was my first and my most difficult baby, mostly because I had no clue what I was doing, despite my good intentions. You can’t call a baby bad – that’s just rude. Let’s call her … consistent. I breast-fed her all the time, round the clock, mostly because the public health nurses scared me shitless about giving her a soother – which would have been extremely helpful considering half the time she was on the boob it wasn’t for food but to go to sleep. Some advocates will tell you this is wonderful, a testament to her connection to you, but though I support breast-feeding, I will not tell you to put that baby to breast every time she cries because that baby will then be completely unable to put herself to sleep without your nipple in her mouth and this will lead to her being a cranky demon-baby and you being a sleep-deprived, sore bitch to everyone you love until you are forced to withdraw from this co-dependent arrangement because not doing so will result in you murdering her or yourself, which is far, far worse than letting a baby learn how to settle herself to sleep in the first place.

But what does James Gandolfini have to do with all this? Unlike my husband, who slept soundly through those eight months of round-the-clock feeding sessions, since he wasn’t the lactator and one of us needed to be sane during daylight hours, James was my constant companion. The one bright side of being forced to sit with a baby attached to me for hours on end was that I could watch "The Sopranos," and a big part of the reason it made me feel better, aside from my fondness for mobsters, violence and the f-word, was that I was fascinated by Gandolfini’s portrayal of this complicated, brutal man. While I caught up on seasons back to back to back, I was able to get through each night, giving everything – including precious sleep and sanity – to this little person while maintaining a very adult pleasure to myself, since everything fun that was ingestible was out of the question.

It didn’t hurt that his mother was so horrid either. I knew I was always going to be a better mama than Mrs. Soprano Sr. I may have wanted to throw my amazingly wonderful baby out the window sometimes, but I’d never actually take a hit out on her, especially after she was already on solids and toilet trained. Sheesh.

The juxtaposition of what our culture deems one of the softest and most feminine acts – nurturing my newborn with my own body – with one of the more violent and profane (and thus seen as unfeminine) cultural productions of its time gave me a little thrill. It was an act of rebellion as much as necessity. Desperation can make you think you’re far more subversive than you really are.

Plus, some of Tony Soprano's best lines were just ripe for motherhood. “You don’t shit where you eat. And you really don’t shit where I eat,” became a favorite of mine when she’d relieve herself while I ate with one hand, holding her (on the boob, of course) with the other. In another episode, Tony complains, “The things I take pleasure in, I can’t do,” and all I could think was, word. I’m embarrassed to relate how many times and in what contexts I’ve used the phrase “Bada-bing, bada-boom!” And much later, when I tried to explain to a friend who was considering starting a family the awesome responsibility I felt in those early days, I fell back on Tony’s lament, “All due respect, you got no fucking idea what it’s like to be number one. Every decision you make affects every facet of every other fucking thing. It’s too much to deal with almost. And in the end you’re completely alone with it all.”

But you don’t remain alone forever. Every stage ends. I’m one of the very few people I know who actually loved the ending of the series. I thought it was true to life: Things just go black sometimes. Sometimes, there is no closure, no clean answer or resolution. It didn’t matter to me whether Tony lived or died. I had a glimpse into his life and that was enough. By the time the series ended, I was an old pro at the baby thing. The next phase was waiting. Bada-bing, bada-boom!

And like the show, Mr. Gandolfini’s life ended abruptly, without closure. I, and likely most of the world, will remember him best for this one role, though I’ve seen and loved so many of his films. I just have a soft spot for Tony, because he was my beacon in the night, distracting me when I most needed it. So rest in peace, Sir. And thank you.

A slightly different version of this piece appeared on Karras' blog.

Irene Karras is a writer who blogs at misplacedmysassy.wordpress.com.