Fighting more forest fires will come back to burn us 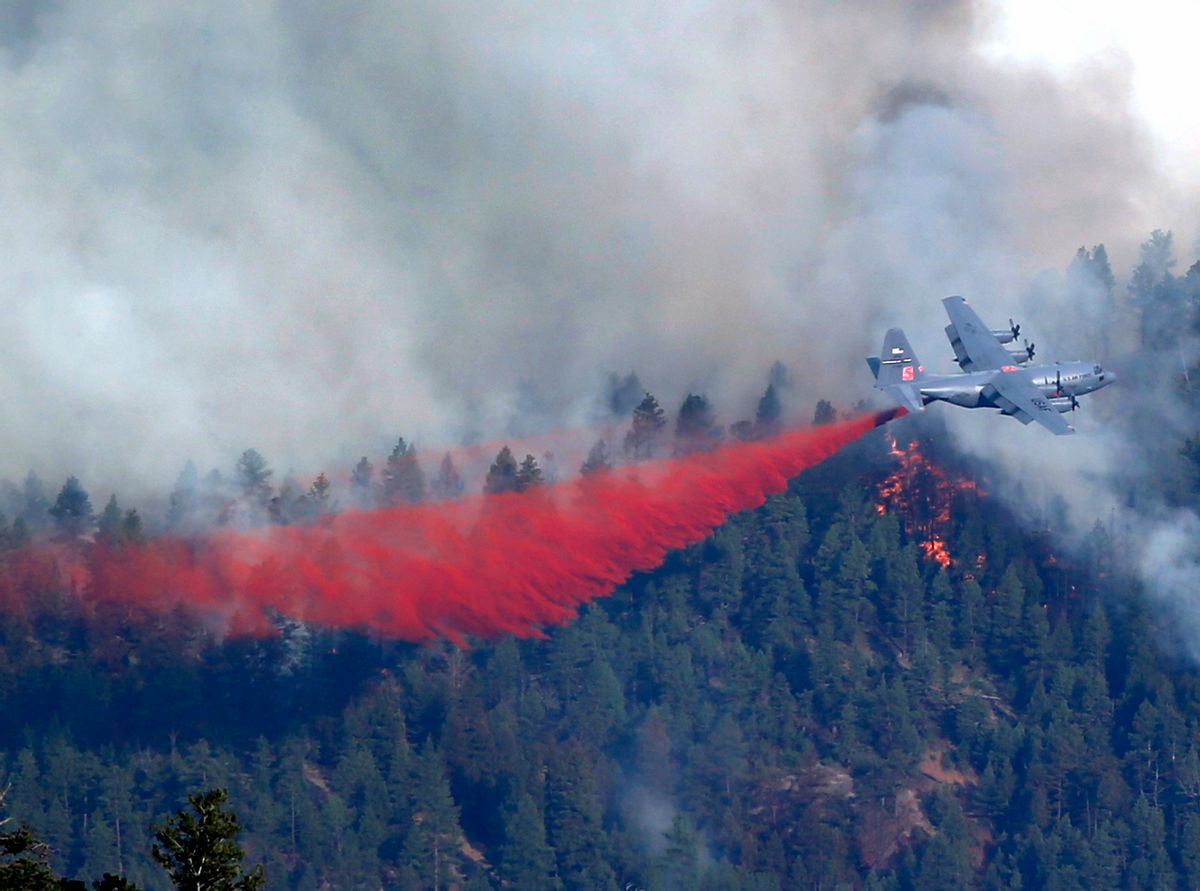 A year ago, as Colorado was in the midst of the one of the worst wildfire seasons in the state’s history (something that looks to be matched or even surpassed this year), I climbed the mountains above my home in Boulder. There was a brief reprieve between blazes, and I was hoping to find blue sky, but the air was still filled with enough smoke to make me cough. More than 600 miles from the peak where I stood, the Whitewater Baldy Fire in the Gila Wilderness of New Mexico -- the largest fire in that state’s history -- was blanketing my home with a thick haze.

It was hard to see hope in the smoke, but it was there when I looked for it.

In the following months, as forests across the nation exploded in a wildfire season for the record books, fire scientists looked on the Whitewater Baldy burn as a success story. Yes, the blaze covered a massive area -- 300,000 acres, about the size of Los Angeles -- but it also showed that fire in a properly managed wilderness can burn a large area without totally destroying it. Fire can even make a forest healthier and more resilient for the future, when forest fires are predicted to be bigger and more destructive (see “Climate Change Fuels the Perfect Firestorm”).

For almost 40 years now, the U.S. Forest Service has been managing the Gila Wilderness according to a “let it burn” policy that allows small, natural fires to thin overgrown forests, getting rid of dead brush and excess timber that can spark a massive conflagration. So when the Whitewater Baldy fire raged through the ponderosa pines last June, it found far less fuel, and therefore had less destructive potential, than it would have in a forest where every previous fire -- no matter how small or harmless -- had been immediately snuffed.

“To me,” says Jose "Pepe" Iniguez, a research ecologist with the U.S. Forest Service’s Rocky Mountain Research Station, the Gila Wilderness is “the best looking forest in the Southwest.” Even in some of Iniquez’s study areas that were completely overrun by the Whitewater Baldy, much of the Gila survived largely unscathed. Brush and grasses were burned away, along with small trees that crowded the forest -- but the big trees made it through with only scorch marks on their thick trunks. To Iniguez and other ecologists, the Whitewater Baldy provided further proof that healthy, resilient forests actually need fire to thrive.

That concept has been the centerpiece of U.S. forest fire policy for almost two decades now. The 1995 Wildland Fire Policy, which governs firefighting on public lands and wilderness areas, states: "Wildland fire, as a critical natural process, must be reintroduced into the ecosystem." The policy (which does not, by the way, in any way prohibit fighting fires that threaten life or property) grew out of the modern views of ecologists, who today see that flames are as much a part of a forest as the trees. Firefighting, in the view of many of these ecologists, should focus on protecting homes, watersheds, and critical infrastructure. But blazes in more remote woodlands should be allowed to run their course -- a policy that wastes less money on fighting fires that won’t hurt anyone, while making forests healthier overall.

Yet not everyone sees it that way. Though it didn’t take any lives, the Whitewater Baldy did destroy a dozen cabins and force the temporary evacuation of several towns. As it burned last June, a member of New Mexico’s Congressional delegation, Republican Steven Pearce, took to the floor of the U.S. House to make a blistering attack on the “let it burn” policies of the last 20 years. “It's a tragedy, what's going on in the most pristine parts of our country -- wilderness areas where fields have been allowed to burn, and where we're going to see the absolute destruction.”

Where Iniquez saw a cathedral-like forest of surviving ponderosa pines, Pearce described soils cooked almost into glass, forests that wouldn’t regrow for 150 years, and debris flows that would “flood towns completely off the face of the earth.”

Pearce, clearly, represents the old-school perspective on wildfires, one that believes timber harvests and grazing animals are better at thinning out the woods and grasslands than natural fires. Those on this side of the debate would prefer to spend more government money on aggressive firefighting, in order to protect the resources that the timber and grazing industries depend on. They’re joined by developers, who are building thousands of new homes and communities (sometimes called “suicide subdivisions”) in proximity to fire-prone forests around the country (see “Life on the Edge [of Wildfire]”). This side of the debate might be properly described as the “fire industrial complex.”

The nation’s investment in fighting wildfires has already increased from some $300 million a year in the early 1990s to as high as $3 billion annually in the past decade, as wildfires have continued to grow larger due to climate change and threaten more property because of increased development. Yet the fire industrial complex argues that the solution is to continue spending more money on firefighting -- something some of the best forest ecologists and firefighting experts in the country have told me is the equivalent of burning money, and will only make things worse in the future.

“Even with more modern equipment, with airplanes and helicopters, we can’t stop the fires,” says George Wuerthner, a former National Park Service ranger and editor of the book Wildfire: A Century of Failed Forest Policy. “I’ve had firefighters tell me, ‘It’s like dumping dollars on the fire.”

Those dollars are increasingly going to private firms, not local, state, and federal fire crews. “Privatization has changed firefighting, and not for the better,” says Rich Fairbanks, a former fire planner for the U.S. Forest Service and one-time foreman of an elite “hot shot” crew. Private companies supply everything from helicopters and bulldozers to caterers and mobile shower facilities for the fire camps. Most don't get paid if they’re not actively fighting a fire; consequently, they lobby at the local, regional, and national level to fight as many blazes as they can.

“There’s a lot of money to be made in fire suppression,” says Crystal Kolden, an assistant professor of geography at the University of Idaho who focuses on wildfire. “Contractors are very good at playing on the public’s fear of large wildfires. Those private entities … have an incredibly powerful lobby in Washington, D.C.”

Representative Pearce, for instance, received significant donations from livestock interests, the real estate industry, and agricultural producers (including timber), who were the third, fifth, and sixth-highest contributing sectors to him in the latest election, according to the Center for Responsive Politics. This spring Pearce co-sponsored two bills -- the Healthy Forest Management and Wildfire Prevention Act and the Catastrophic Wildfire Prevention Act -- that, among other things, would give grazing and timber interest more freedom to thin forests on publicly managed lands and limit government oversight of those industries.

Nowhere is the debate over proper fire policy more heated than among current and former employees of the U.S. Forest Service, which manages nearly 200 million acres of forest and grassland and, consequently, is the agency most responsible for driving the nation’s wildfire policies.

“I’m just amazed in the last three years since I quit how they’ve moved backwards,” says George Weldon, who was deputy director of fire and aviation for the Forest Service’s northern region based in Montana when he retired in 2010. Like his colleagues in New Mexico, Weldon saw marked improvement in the health of the Selway Bitterroot and Bob Marshall wildernesses in the northern Rocky Mountains when small fires there were allowed to burn naturally. He was outraged last year when a Forest Service memo (reported by OnEarth) ordered wilderness mangers to suppress fires deep in those remote forests, where they posed no threat.

Weldon says the Forest Service is playing on fear of fire in order to keep itself well-funded. “The Forest Service is looking at spending $500 million to get new generation air tankers” (which drop water and flame retardant on fires from above), he says. “But there’s never been a scientific study that demonstrates the effectiveness of large air tankers. … It’s a prime example of how powerful the fire industrial complex has become in a very short time. It’s not only the politicians and industry. It’s the agency.”

The demand to keep the revenue rolling in has grown so great that some representatives of the fire industrial complex, including Pearce, are urging the government to go back to a firefighting technique completely discredited in the second half of the 20th century. Known as the 10 a.m. policy, it was the most aggressive step in a century of escalating wildland firefighting that followed the "Big Blowup" of 1910 -- which burned 3 million acres in Montana -- inspiring American philosopher William James to write of extinguishing wildfires as "The Moral Equivalent of War." The policy called for snuffing out any forest fire by 10 a.m. the next day. The results are still with us today: by interrupting one of the forest’s most important processes for maintaining its own health, the suppression of the natural fire cycle effectively stockpiled a century's worth of fuel, creating explosive forests prone to burn big, fast, and hot.

We’re seeing the effects right now across the West. Outside Colorado Springs last week, the Black Canyon fire destroyed about 500 homes, making it the most destructive fire in Colorado history. That record has been broken four times in the last four years -- most recently, before last week, by the Waldo Canyon fire, which destroyed hundreds of homes outside Colorado Springs not even a year ago. Earlier this month, a forest fire in New Mexico forced evacuations 25 miles from Santa Fe, and California’s wildfire season ignited months ahead of schedule, burning tens of thousands of acres and threatening thousands of homes.

When so many people are inconvenienced and endangered by fire, it’s easy for the fire industrial complex, like the misguided William James, to push for more money, more equipment, more mobilization. But then there’s no chance for natural fire to create conditions like those found in the Gila Wilderness, which kept the Whitewater Baldy from being even more destructive and potentially deadly.

“Science suggests that we should let more of these fire burn, particularly in wilderness areas,” says Kolden, the University of Idaho professor. “Fires become self-regulating over time. Older fires are a fire break to newer fires.”

In other words, for the sake of the future, sometimes you’ve just got to let it burn.