My daughter thinks she can't be president 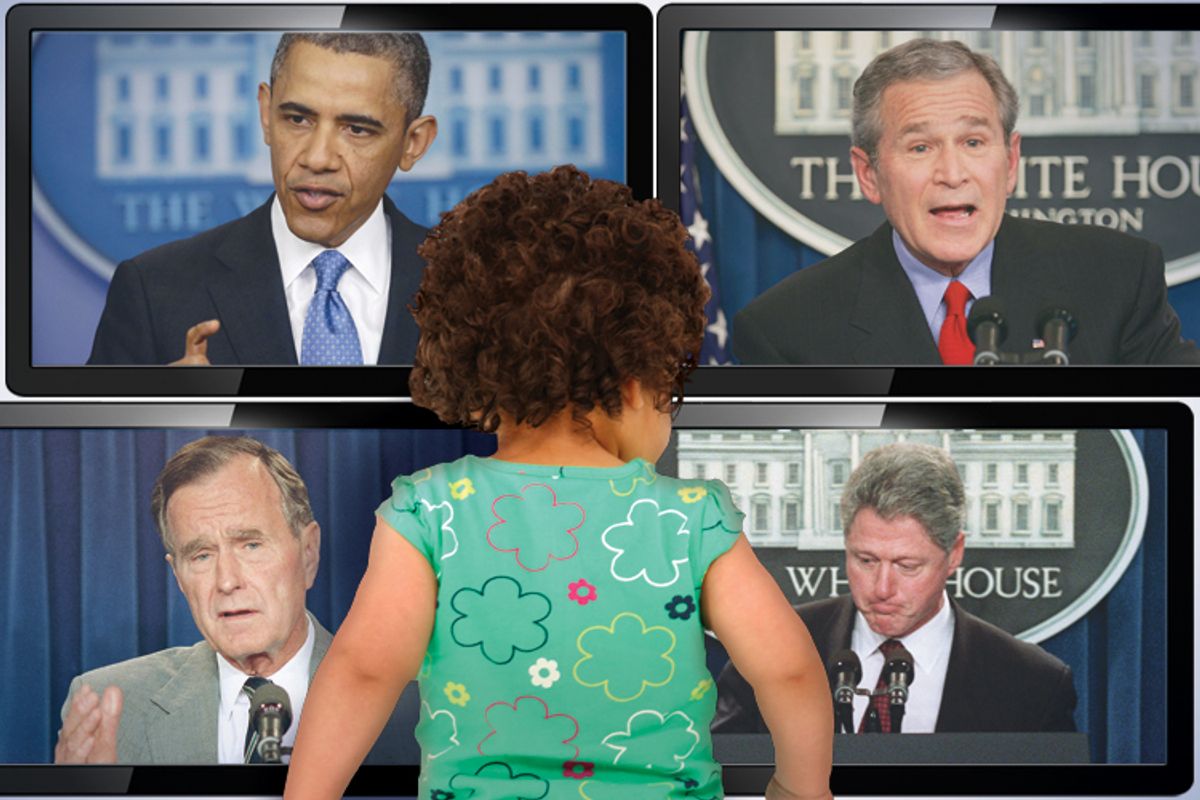 Ever since we learned you were coming into our lives, your mother and I have strategized for ways to make sure that you never feel limited by some of the common gender stereotypes that we see everywhere in our society. And after almost three and half years later, we’ve come to realize – it ain’t easy.

It really started to hit me a few days ago.  You and I were walking down the street and I pointed to the picture on the front page in the newspaper stand.

Beaming with pride that you knew the answer, you looked up and said, “President Obama!”

“That’s right!” I congratulated you.  “President is a very important job.  Would you like to be president some day?”

Then, turning to me with a look as if I had just made the silliest suggestion ever, you laughed and said, “Daddy … I can’t be president! I’m not a boy!”

Talk about a verbal gut punch.

Now, I get it.  You’re 3 years old.  Your entire life you have only known one president, and he is, indeed, clearly of the male persuasion.  That is your entire frame of reference.

Furthermore, I also have to remind myself that you don’t really understand just how important a job president really is.  After all, when President Obama was accompanied by the Easter Bunny at your first White House Easter Egg Roll, you were the 2-year-old little girl who screamed “HI BUNNY” as loud as you could, just as the president began to address the crowd.

Still, your words were pretty devastating -- especially to a guy who spent a year and half trying to help elect our first woman president.  As your father, I don’t want to think that there is any job you can’t do because you are “not a boy.”  I still remember campaign rallies in 2008 where fathers would hoist their young daughters onto their shoulders to catch a glimpse of Hillary Clinton, telling them that one day they could be president.

But we can say it all we want.  As long as children’s picture books of the presidents are filled with only men, the point is a little harder to make.  As long as women make up only 20 percent of senators and only 10 percent of governors, while making up over 50 percent of the population, it raises real questions.

I have to hope that, as you get older, those numbers get better.  Because if they don’t, you might actually mean it the next time you say you can’t do something because you’re “not a boy.”

But then it got worse.

When I asked you what you did want to be, you said with all the certainty in the world, that you wanted to be … a princess.

And not just any princess.  You like Arielle, and Cinderella, and Jasmine, and Aurora, but you really wanted to be Belle.  And I had to be the Beast.

First of all – you’ve never watched any of those movies, or been read any of those stories.  How do you know all about them?  (I’ve seen them all, and I had no idea that Aurora was Sleeping Beauty’s real name! How the heck do you know that?)

Secondly – your mother and I really did not want you to fall into the “princess trap.”  You know the one – where the helpless princess has only one singular path to happiness, and it revolves entirely around winning the affection of her Prince Charming.  I thought those stories were lovely and cute before I met you.  But when I began to realize the lesson that they were teaching in the context of what you might take from them, that all changed.

It’s not easy to avoid that message.  It’s everywhere.  We can’t walk through a store without finding some imagery of the glamorous princesses beckoning to you.  Television – even a lot of children’s television – is dripping with it.  Even when there are attempts to show strong women and girls, they’re often still objectified.  (I thought we were safe watching Dora the Explorer on Nickelodeon, until the promos came on for the Winx Club -- the show about a band of superhero fairies with Barbie doll bodies flying around in tight tube tops and booty shorts.)

So to hear you say that this is what you aspired to be – even at the age of 3 – made me just a little sad.

But maybe I shouldn’t be.  Maybe there is still some hope that you will overcome all of society’s mixed messages.

A few weeks after our conversation, we went for another one of our daddy-daughter walks.  About halfway through, you stopped dead in your tracks and proclaimed as loudly as your little lungs would allow, “Daddy, I have to marry you!”

“You do?” I asked, more than a little amused.

“Yes.  Because you’re the Beast and you didn’t turn into a prince yet.  So I have to marry you.”

While the conversation went on a little longer (and got even more hilarious as you started ticking off your invite list, which included the Tooth Fairy), that moment struck me.

In your mind, you weren’t the demure little princess waiting for Prince Charming to come save you or sweep you off your feet.  You were the one coming to my rescue, to help me reach my potential.

You were the one who was empowered.

So who knows?  Maybe I don’t need to worry as much.  Maybe your generation of princesses will end up being presidents.

(P.S.  At some point, we need to have a talk about you constantly calling me Beast.)

Mo Elleithee is a Democratic political consultant in Washington, DC, and was traveling press secretary for Hillary Clinton’s 2008 presidential campaign. More importantly, he is the father of a three-year-old daughter and three-month-old son.