He kills me every night

I was 5 when I saw my mother stabbed by her boyfriend. I don't know how I'll ever be close to a man again 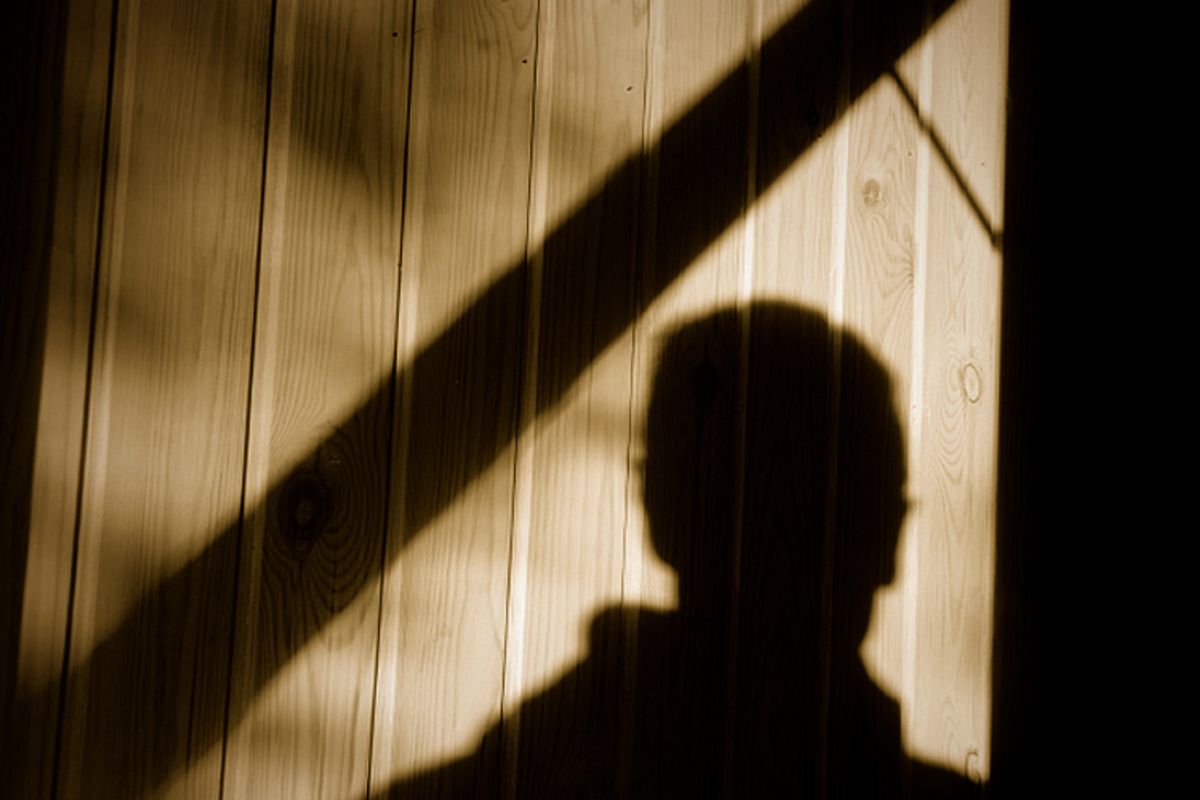 I was on a date with a guy I’d met online. Over tapas and wine, I told him I was a fashion executive who had her MBA, that I was not religious and that I had a teeny-tiny PlayStation addiction. He said he loved horror movies and held up two tickets to the multiplex’s current screamfest as if we’d won the lottery.

I stiffened and silently debated whether or not to tell him my secret.

“You don’t like horror?” he asked, his smile wilting in my silence.

I remembered reading that you should never talk about mental health issues on the first date. “I get really scared,” I said, which was easier than telling him the real story: I watched my mother die when I was a kid, and now I live my life avoiding things that trigger that memory and the severe anxiety that comes with it.

“That’s cute,” he said, but he raised a brow and gave me that look: You’re a 30-something woman. Grow up.

So I decided to go with him. I told myself it was just a movie. But I spent the entire film looking away from the screen, darting my eyes from ceiling to floor and wincing every time I heard that shrill, piercing scream that reminded me of my mother’s.

I was quiet when we left the theater, hoping he didn’t notice my sweaty pits or that I was still trying to catch my breath. My body was so tense I could barely look him in the eye. When he reached for me, I flinched. I needed to get away. After we parted, I went to a Lower East Side dive bar not far from my apartment. There was too much darkness back home waiting to scare the bejeezus out of me, and I was out of vodka, so I took a seat among the drunk men sitting alone around the bar, happy to be insulated from the dangers of my imagination for a while. It was a sad way to end a romantic evening, but it was a relief to me.

Later, I told my therapist about the whole ordeal. “That doesn’t sound safe,” she said. I’d been seeing her for over three years.

“It felt safe to me.” I shrugged. “I nursed one drink. I just didn’t want to go home. I didn’t want to see him.” I meant the Shadow Man, the figure that has haunted me since I was 5 years old.

I nodded. “I had to sleep with the light on.”

I grew up in a violent household, a two-bedroom apartment in Pennsylvania where safety came with a side of danger. My earliest memories are of the tumultuous relationship between my mother and her boyfriend, whom I’ll call Juan. "Cougar" was not a term in the 1980s, but that’s what my mother was. She was 37, slim, dark-haired and beautiful. Juan was 21. Every day his lean frame would swagger through our door, sweaty from basketball, his deep voice accompanied by a smile that took over his young face. He wore cutoff shorts with no shirt and he left a pick in his afro. He liked to order me around, like when he’d put his head in my tiny lap and make me pick out his hair while he watched TV. “Tease it out, li’l girl,” he’d say.

I’d watch from the other end of the couch as my mother and Juan snuggled. I’d play on the floor while they laughed and kissed in the kitchen. Their passion was tangible, especially when they fought. I stayed in the background while their voices rose so loud they drowned out the television. I’d jump when Juan lunged at my mother, grabbing her arm and jerking her around the room. And I’d run when her hairbrushes whizzed past Juan’s head, smacking against the living room wall.

Looking back, who knows why they fought. Maybe it was because of their age difference. Maybe it was because she was white and he was Puerto Rican (probably more taboo than their age gap). Or maybe it was because my mother worked a graveyard shift while Juan was illegal and unemployed. They had issues, and they took them out on each other. One night, I was playing in my pink bedroom when I heard Juan’s voice boom down the hall. My mother’s high-pitched shout followed. On tiptoes I chased their angry voices into our living room where they stood facing each other. What happened next was a blur. I didn’t see exactly how it happened. But my small body froze by the wall as Juan sank a 9-inch kitchen knife into my mother’s chest.

I knelt down beside her and called her name, staring at the red stain on her nightie as she slipped away.

My father didn’t want me, so I was taken in by my grandmother. My mother’s mother. The first night in my new bedroom, I stared into the dark and saw the Shadow Man’s large form fill the doorway. He stalked toward me, a familiar knife in his hand. I pulled the covers over my nose and lay still. Closing my eyes didn’t make his image go away, but when I blinked a second later, he was gone. Jumping to the floor, I ran to Gram’s room and crawled in her bed, hiding.

We didn’t know about grief and trauma then -- we didn’t know the term “PTSD” -- so when I crawled in her bed night after night, my grandmother assumed that I’d just grow out of it. The priest she consulted told her I’d forget my mother’s death eventually. The sweeping under the rug was swift, but I didn’t forget. I slept with my grandmother until I was 13. The Shadow Man came every night.

By my sophomore year in college, I was sure I was crazy. My nightly visions came like clockwork, but I had another problem. I wanted a boyfriend, but between the murder of my mother and my father’s abandonment, I had developed an underlying rage toward the entire male species. (I even refused to have male pets.) It wasn’t just anger I felt, it was fear. I liked boys, but I got nervous when they liked me back. Most of my relationships didn’t last a month.

Counseling sessions with grad students from the psych department were free. “And what does this Shadow Man do?” asked one of them.

“Yep. Some nights he slashes at me. Other nights it’s a clean stab. I don’t sleep much.”

Forty minutes flew by until the grad student stopped me, looking overwhelmed, and handed me a pamphlet with the heading “Post Traumatic Stress Disorder,” a type of anxiety disorder that can occur after you've seen or experienced a traumatic event that involves the threat of injury or death. Recognizing eight of the 10 listed symptoms, including flashback episodes and emotional avoidance, I sagged with relief. My problem had a name.

Since then, there have been several therapists who have listened and nodded, but still, I struggle. “Did you at least enjoy dinner?” my current therapist asked about my date.

I shrugged. She knew I’d avoid that guy. Over the years, we had sifted through my dating past to find a distinct pattern. If the guy was too aggressive, too physically strong, or too attractive, I’d shut down. Maybe that’s why I jumped into a relationship at 22. He was passive, skinny and medium-cute. We were both 30 when we married. We laughed a lot, but we were terrible lovers. There was no chemistry. It was a passionless, sexless marriage, but I felt safe. Safe from becoming my mother, at least.

But safe doesn’t make a marriage. We divorced two years later. I spent the next four years on a therapist’s couch.

Somewhere in my brain lies a belief that if I’m not in danger of falling in love, then I’m not in danger of dying. I want love, but to my subconscious, love equals death. “Which makes dating sort of like suicide,” I said with a laugh during one of our sessions. She didn’t think that was funny.

She asked me if I was afraid of my date at any time in the night.

“I wouldn’t call it afraid. More like wary. His build, his confidence. He seemed …”

The minute I said it, I felt ridiculous. He wasn’t Juan. I never heard from Juan again after he went to jail. And any chance of him finding me lessened when I moved to New York after college. There is comfort in being one of 8 million, but no real closure. And how can you convince your mind of something your body decides on its own? I knew there was no danger, but my muscles still twitched with the pain of that memory. I worry that I will stay stranded in this place forever, longing to be close to a man but haunted by the horror of my past.

So I decided to invite my date to a jazz brunch. I was determined to get through a date no matter what.  When he smiled at me, I smiled back. He slid his chair next to mine so he could better see the band, and maybe it was the music, or maybe it was the daylight, but I didn’t flinch when he leaned over to whisper in my ear. When his hand brushed my arm, I refused to pull away. He emailed a few days later to tell me he wanted to see me again, and though it was a small triumph, it still felt sweet.

Therapy has helped me loosen the grip of my fear. I know my triggers now. I know how to stay calm. There’s no cure, just understanding. My heart will always race, the flashbacks will always be tough, but I manage. I’ve learned to greet my demons, not run from them. My sleeping has gotten easier, too. I have a French bulldog, Maximus, and while he might not be tough, he is all ears. The way he can detect someone minutes before they knock is freaky.

One night, Maximus and I went to bed late. I plopped his cushion on the floor next to him and then burrowed under my covers before switching off the light. The lamp I left on in the living room cut the darkness with a soft glow, and I watched Maximus circle his little bed before folding into a comfy position. My eyes darted to the open bedroom door. All was clear, but as my lids drifted closed, a dark figure filled the doorway and stood at the threshold, waiting. It was time to face my Shadow Man.

“Stay,” I said aloud, giving me a small surge of power. Maximus lifted his head to give me a quizzical look. “Good boy,” I said.