These organizations threatened to cut work hours to avoid government requirements. See how many followed through 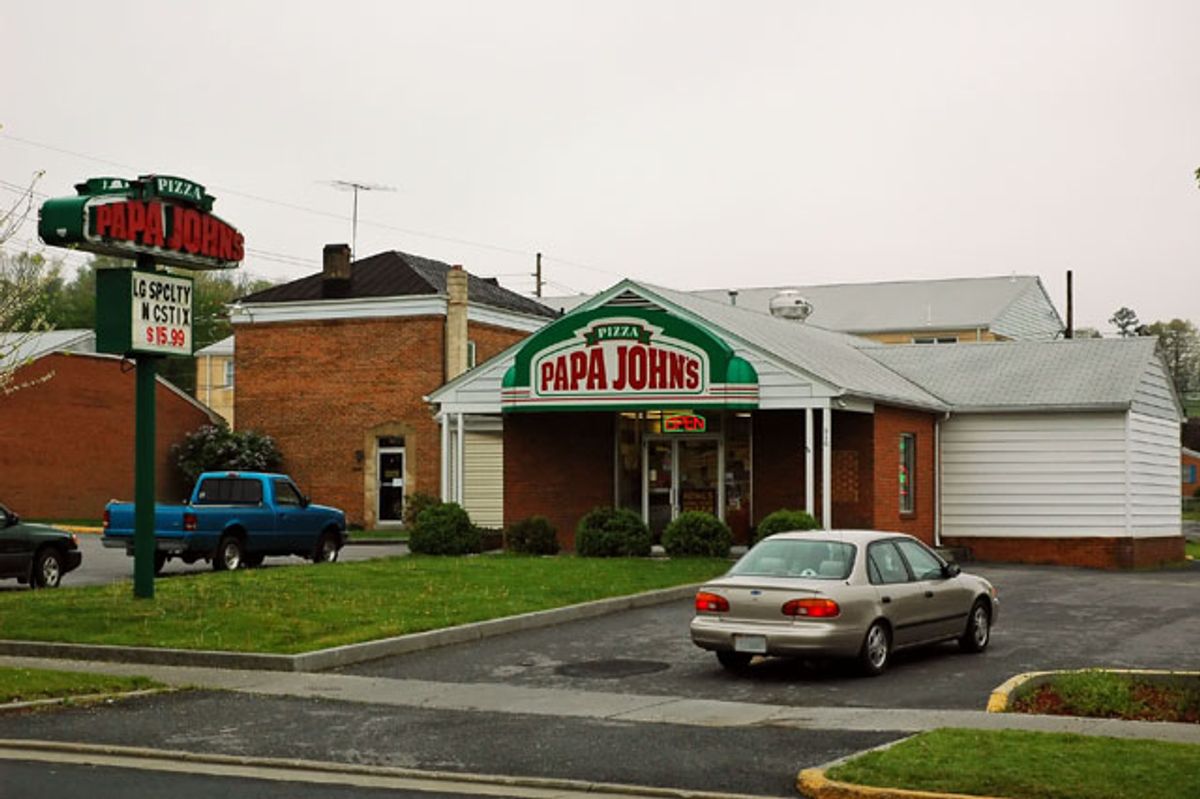 During the runup to the 2012 general election, some business leaders were feeling antsy. “Everyone’s looking for a way to not have to provide insurance for their employees,”said John Metz, who is an owner of at least 45 fast food restaurants, in a Fox News interview soon after President Barack Obama’s re-election. “It’s essentially a huge tax on all us business people.”

During and immediately after the election many employers in the low-income service sector warned about dire effects the Affordable Care Act would have on employment and prices. The jerry-rigged, patchwork healthcare reform Obamacare tries to mend America’s long-standing coverage gaps with a variety of tools, including expanding Medicaid, establishing state-based exchanges supported by public assistance, and granting small businesses (25 or fewer employees) subsidies to provide insurance for their employees. But larger businesses (50 employees or more) are incentivized to provide coverage with a stick: Pay a $2,000 fine per employee who works more than 30 hours and lacks insurance.

Mandated insurance without goverment subsidy essentially represents a transfer of wealth from business owners to their employees, specifically those in the low-income service sector who don't already provide coverage.  mostly in the low-income service sector, to their employees. During the presidential race Jimmy John Liautaud, founder and CEO of the sandwich company Jimmy John’s, mentioned in a Fox Business News interview that his company would cut hours if the ACA was enacted. “We're not doing it now, but we have to bring them down to 28 hours. Yes, we have to do that. There's no other way we can survive it, because we think it will cost us 50 cents a sandwich. That’s just the actual cost.”

But are businesses actually following through on the apocalyptic predictions of the soon-to-be moderately less-wealthy large business owners of America? AlterNet contacted the business owners who have threatened to cut employee hours or positions in the face of their new federally required responsibilities. While the likes of Metz and Liautaud cried wolf long and loud in 2012, many companies are now hedging.

Metz owns 40 Denny’s Restaurants and is the chairman and CEO of Hurricane Grills and Wings, a Florida-based company. In his Fox News interview, he announced that most of his 1,200 workers will be facing a decline in work hours. But Denny’s chief executive quickly smacked Metz down, distancing the parent company from its franchisee’s statement. "We recognize his right to speak on issues, but registered our disappointment that his comments have been interpreted as the company’s position," said Denny’s chief executive John Miller in an email to the Huffington Post. Metz quickly announced that he regretted that his personal views were interpreted as a company-wide policy.

“In the third and fourth quarter of last year, an awful lot of things backfired on a lot of people and a lot of things were said in pure speculation because no one really understood what the Obamacare bill was going to be,” says Martin O’Dowd, president of Hurricane Grill and Wings (he is unrelated to the Denny’s franchises and Metz is currently traveling and unavailable for comment). “I can tell you what we are not doing. We are not adding on to the guest check, we are not going to be manipulating the employees hours. We’re simply going to find more efficiencies in our business.”

In 2012, Darden, which owns both the Olive Garden and Red Lobster chains, experimented with replacing full-time labor with part-timers in reaction to ACA requirements. Intense public backlash followed and in the months following the experiment the company’s net income fell by 37 percent, according to theAssociated Press.

Darden spokesperson Rich Jeffers says the company never considered moving any employees from full-time to part-time status. (Their staff has historically been about 75 percent part-timers and 25 percent full-timers.)

When Jimmy John’s CEO Liautaud declared that Obamacare would force him to cut employee hours, he was agreeing with his Fox Business News’ host that his company would follow what he understood to be Darden’s example.

Jimmy John’s spokespeople could not be reached for comment. But workers and managers from across the country told AlterNet that most of the chain’s workers are already officially part-time, although covering a co-workers’ shift is common practice and often results in 40-or-more hour work weeks. (Managers’ bonuses are pegged to a store’s labor costs, so they are already incentivized to take a minimalist approach to personnel.)  Franchises in Kentucky and Florida reported no mention of Obamacare’s potential effects.

But a Jimmy John’s employee in a major Midwestern city reports that the company, or at least the owner of this franchise, is following through on Liautaud’s threats.

“My manager has told all of us several times that they are going to cut our hours down to 28 or 25 hours a week, specifically because of that law,” says one Jimmy John’s employee, who asked to remain anonymous for fear of retaliation. “I work most of the time over 30 [hours a week], as do more than 50 percent of my co-workers.”

This accords with the threat analysis of UC Berkeley’s Center for Labor Research and Education, which estimates that 3.1 percent of the workforce employed by large firms are “most vulnerable to work reduction.” Workers in the restaurant, hotel, building service, nursing home, and retail trade are at greatest risk, all industries that have historically provided low pay and health benefits except when forced by law or worker organizations.

“There is a risk of employers cutting hours in certain industries and we assume the workers that are most vulnerable to these reductions are those who work slightly more than 30 hours a week, don’t currently get coverage on the job, and have income at a level where they might be eligible for exchange subsidies,” says Laurel Lucia, policy analyst for the Center for Labor Research and Education.

It’s impossible to say if this policy is coming from on high or is the action of one particularly reactionary franchisee. Only one way to find out: Call the manager ofa local Jimmy John’s and ask if they intend on evading the law, too.

Other companies are more upfront about their plans to escape their nascent obligations. According to a March 2013 Atlanta Business Chronicle article, Atlanta-based parking garage company AAA Parking planned to reduce half of its 500 full-time hourly employees to part-time hours. The company told theChronicle that it must make “substantial changes in our hourly staffing models, or suffer an enormous and unsustainable annual net loss.”

When AlterNet called to inquire if the company followed through, AAA Parking’s spokesperson referred back to the Atlanta Business Chronicle article. “That’s all we have to comment on it at this time. There’s really no change to our plans, what we’ve stated previously is still the plan going forward.” If so, that means 250 employees were relegated to part-time positions as of April 15.

The Chroniclearticle reported that Pillar Hotels and Resorts, based in Texas, would be “focusing on hiring part-time workers among its 5,500 employees.” When contacted by AlterNet the company distanced itself from that claim.

“Yeah, actually, we were misquoted in that article. Sometimes you get a part of the conversation, not the full conversation and that’s kind of what happened. Basically all our employees are concerned that their jobs are going to be changed to part-time and that’s absolutely not accurate at all,” said Jolynda Ward, senior vice-president of employee services. When asked if the company would focus on hiring more part-time employees in future because of the ACA, Ward responded: “It’s to be determined at this point. We haven’t made any decisions.”

Papa John's CEO John Schnatter’s trademark good humor was ruffled by the Affordable Care Act, which he railed against throughout 2012 (he was a big Romney supporter). He even prophesied,after Obama’s reelection, that franchisees would have to cut employee hours: “That's probably what's going to happen. It's common sense.”

But he quickly retracted the comments on the Huffington Post: “The fact is we are going to open over hundreds of stores this year and next and increase employment by over 5,000 jobs worldwide. And, we have no plans to cut team hours as a result of the Affordable Care Act.”

Schnatter’s isn’t alone in his doom-and-gloom attitude toward the ACA. Zane Tankel is the CEO of Applebee’s New York Franchise, Apple-Metro, and he didn’t sound sanguine about retaining a full-time workforce after Obama’s reelection. “If it's possible to do without cutting people back, I am delighted to do it, but that also rolls back expansion, it rolls back hiring more people, and in a best-case scenario, we only shrink the labor force minimally. Best case," he told Fox Business News last November.

In Guthrie, Oklahoma, a Taco Bell employee came forward and told local media outlet News 9 that the restaurant refused to let anyone work more than 28 hours. “They informed everybody that nobody was considered full-time any longer, that everybody was now considered part-time, and [they] would be cutting hours back to 28 hours or less due to Obamacare,” said Johnna Davis in January 2013. Treadwell Enterprises owns this particular fast food joint, along with over 100 other fast food joints.

The company did not respond to email or phone call questions attempting to ascertain if this practice has been enacted throughout the company’s franchises. Feel free to ask them.

MSNBC’s Ned Resnikoff reported the Taco Bell cutbacks and a similar incident at Wendy’s restaurants in the Nebraska area, but the latter news report did not reveal the name of the parent company.

In April, Regal Entertainment Group cut hours for all non-salaried employees just enough to avoid the ACA’s definition of full-time. “To comply with the Affordable Care Act, Regal had to increase our healthcare budget to cover those newly deemed eligible based on the law's definition of a full-time employee,” the company stated in a memo obtained by Fox.com. “To manage this budget, all other employees will be scheduled in accord with business needs and in a manner that will not negatively impact our healt care budget.”

As Think Progress said at the time:

that assertion rings hollow considering Regal’s soaring profits and lavish executive compensation. In 2012, Regal’s stock went up by over 20 percent, and every single major company executive, including the CEO, CFO, and COO, received a six-figure pay increase. CEO Amy Miles made off particularly well, with her pay rising by 31 percent to $4.45 million for the year, bolstered by a base salary increase of $750,000.

Regal Entertainment Cinema did not respond to requests for comment.

As Lynn Parramore recently noted on AlterNet, a 2013 Gallup poll shows one in five Americans employed part time and at least one third of them want full-time work. A May study from the Employee Benefit Research Institute shows that part-time jobs jumped from 16.7 percent of the workforce in 2007 to 22.2 percent in 2011.

Employers have been shifting from full-time to part-time work long before Obama’s election or the Affordable Care Act. The law may provide further impetuous, but the decisions of AAA Parking, and other companies like it, represent an acceleration of trends already in progress. But there’s currently a bill in the California legislature that could bring such employers to heel. California Assembly Bill 880 would fine large companies (those with 500 or more workers) up to $6,000 for every employee on Medicaid. The law is specifically designed to discourage companies like, say, Regal Entertainment from executing employment policies that force the state to subsidize their low-wage employment strategies. The Los Angeles Times reports that “firms would face fines based on 110% of the average cost of health insurance for every employee who is enrolled in Medi-Cal and works more than eight hours a week.”

Jimmy John’s probably won’t be happy about that.