Gun control activists are getting outworked

Most Americans support background checks, but few advocate for them unless they've been affected by gun violence 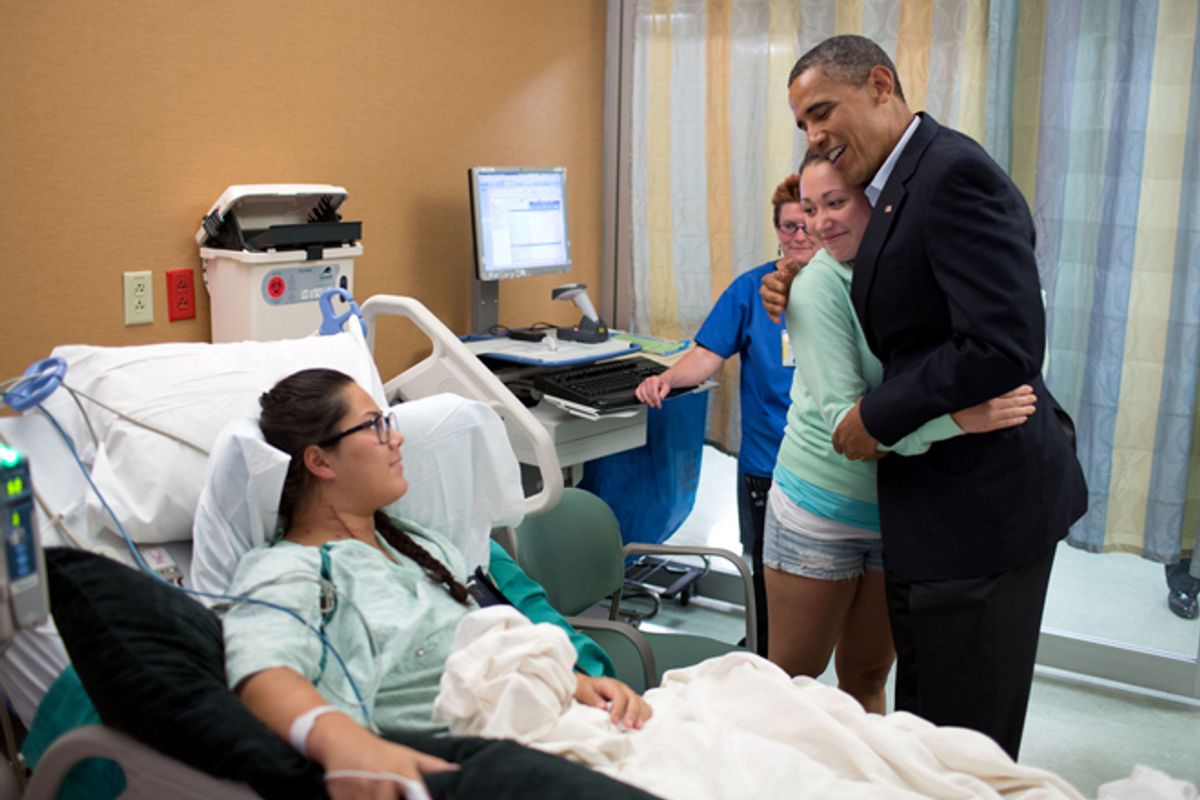 President Obama hugs Stephanie Davies, who helped keep her friend, Allie Young, left, alive after she was shot during the movie theater shootings in Aurora, Colo. (The White House/Pete Souza)
--

I’ve just flown back from Vegas, and boy, are my arms tired. And brain boggled. After all these years, it was my first visit, and although I’ve been to Reno and Tahoe and even the casinos of Winnemucca, Nevada -- “The Crossroads of the West” -- nothing prepared me for the splendor, squalor, sleaze and squander of the ultimate American pleasure dome.

“This is where feminism came to die,” my girlfriend Pat sardonically joked as weary, bikinied women danced on bars and we walked through the heat past the umpteenth sidewalk vendor handing out escort fliers and wearing a neon-colored “Las Vegas Girls Direct to You in 20 Minutes” tee-shirt, a piece of apparel so ubiquitous the casino gift shops now sell them as souvenirs.

Then there was the pop-up “Hitched in a Hurry” wedding chapel along the Strip where too-young, too-inebriated couples dressed in shorts and flip-flops were exchanging vows as passers-by watched through the windows.  We fought the urge to build pop-up intervention centers a hundred feet on either side.

None of which is to say we didn’t have a good time, although in some ways it was more a replica of enjoyment, like the fake Eiffel Tower, Statue of Liberty, Venetian canals and other reproductions that dot the Vegas landscape. This is America through the distorting, funhouse looking glass, whether it’s the 32-ounce, frozen cocktails in adult sippy cups or (I’m not making this up) the Kardashian Khaos boutique in the Mirage Hotel.

And guns. True, we didn’t spot anyone overtly packing heat, except for the occasional law enforcement officer, but the culture certainly was magnified all around us, from the stores with stacks of “American Gun,” the bestseller by Chris Kyle, the ex-Navy SEAL who was shot to death in Texas four months ago, to the multiple billboards advertising machine gun firing ranges and the jeeps in camouflage paint that prowl the boulevards promoting commando-style training in the desert.

The city’s homicide rate for the first quarter of this year is up fifty percent from the same period in 2012. In February, for example, a fatal shooting on the Strip only a couple of blocks from our hotel led to a car crash that also killed a cab driver and his passenger, for a total of three deaths, and just two weeks before we arrived, two died and two were injured in a gun-related, double murder-attempted suicide.

The Vegas police department has above average success arresting the perpetrators – 75% against the national rate of 65% -- but oddly, as columnist J. Patrick Coolican of the Las Vegas Sun reports, “In nonlethal shootings, when the victim survives, the criminal is more than 90 percent likely to get away with the crime…In 2012, for instance, there were 313 nonlethal assaults with firearms. Just 20 of the cases led to an arrest.

A police spokesman told Coolican that homicides are easier to solve – because, he said, you have a corpse and a murder scene. But Eugene O’Donnell, a former cop who’s now a criminologist at the John Jay School of Criminal Justice in New York rejected that rationale and asked, “What's a police department for if not to solve gun violence?”

Obviously, a police department’s for a lot of other things, too, but the question bears consideration. Solving gun violence should be a primary goal of law enforcement but government departments remain hamstringed by budget cuts and hiring freezes, not to mention the relentless bigfooting of the NRA, firearms manufacturers and the rest of the gun lobby. Despite continued tragedies and public support for tougher regulation, not only do they continue on a federal level to prevent further regulation, they strongarm states and municipalities into relaxing the rules or changing them to favor the gun business.

Last week, Alaska Governor Sean Parnell made his state the latest of at least 22 to adopt a “Stand Your Ground” law, allowing the use of deadly force if the owner of a gun feels threatened. He signed the law on the eve of George Zimmerman’s trial for the fatal “Stand Your Ground” shooting of Trayvon Martin in Florida, and chose to hold the signing ceremony -- with heavy-handed symbolism -- at a shooting range so he could, Alaska Public Media reported, “send a message.”

And the day before we arrived in Las Vegas, Nevada’s Governor Brian Sandoval vetoed a bill authorizing universal background checks for gun purchases in the state. According to the website ThinkProgress, “The bill, passed by Nevada’s Democratically controlled state legislature, would have required a background check prior to all gun sales and would have increased reporting of mental illness data. The National Rifle Association’s lobbying arm called the proposal ‘misguided gun control legislation being forced on law-abiding citizens of Nevada.’”

In fact, an April poll found that 87 percent of Nevada voters favored the background check, but “Sandoval said his decision was in part due to the loud voices of that small minority that does not believe criminal background checks should be required prior to gun purchases. He told a local TV station that he’d received 28,000 calls from opponents, and only about 7,000 from supporters.”

There’s the real power of the NRA and the gun lobby for you. Not just the money they throw at media buys and at officeholders and candidates – in fact, last year only three of the sixteen US Senate candidates endorsed by the NRA won. No, it’s the sheer stridency and lungpower of their opposition to any perceived threat to gun ownership. (Add to this the deep and usually unexpressed anxiety that hey, these folks have weapons. As John Oliver recently proclaimed on The Daily Show, “The Second Amendment has won the Bill of Rights. It has defeated all the other amendments, which of course it did when you think about it — it’s the only amendment with a #$@&* gun.”)

The success of this fierce outspokenness and the corresponding failure of the majority are known, Alec MacGillis wrote in The New Republic magazine, as “the intensity gap: While plenty of people support stricter gun laws, few advocated for them or voted on the issue unless they had been personally affected by gun violence.”

Andy Kroll in Mother Jones magazine quotes political scientist Jonathan Bernstein: “Action works. ‘Public opinion’ is barely real; most of the time, on most issues, change the wording of the question and you'll get entirely different answers. At best, ‘public opinion’ as such is passive. And in politics, passive doesn't get results.”

Kroll also cites a recent Washington Post/ABC News poll that one in five gun owners had “called, written, or emailed a public official; only 1 in 10 people without a gun in the household had done the same. In the same poll, 1 in 5 gun owners said they'd given money to a group involved in the gun control debate; just 4 percent of people without a gun in the home previously gave money.”

In just the six months since the Newtown killings there have been more Americans murdered by guns than the 4409 United States armed forces killed in the Iraq war. Despites its failure in April, reports are that Senate Majority Leader Harry Reid may bring a background check bill back to the floor between the Fourth of July and August recesses.

So now is the moment for outrage and action to join hands, to swivel the intensity gap in the other direction, to join with such groups as the Coalition to Stop Gun Violence, the Brady Campaign to prevent Gun Violence, Sandy Hook Promise, Americans for Responsible Solutions (Gabby Giffords’ group), Moms Demand Action, Mayors against Illegal Guns and others; to speak out in force, make the phone calls and send the e-mails, to pressure your representatives. Do that, and this time, as they say in Vegas, I wouldn’t bet against you.