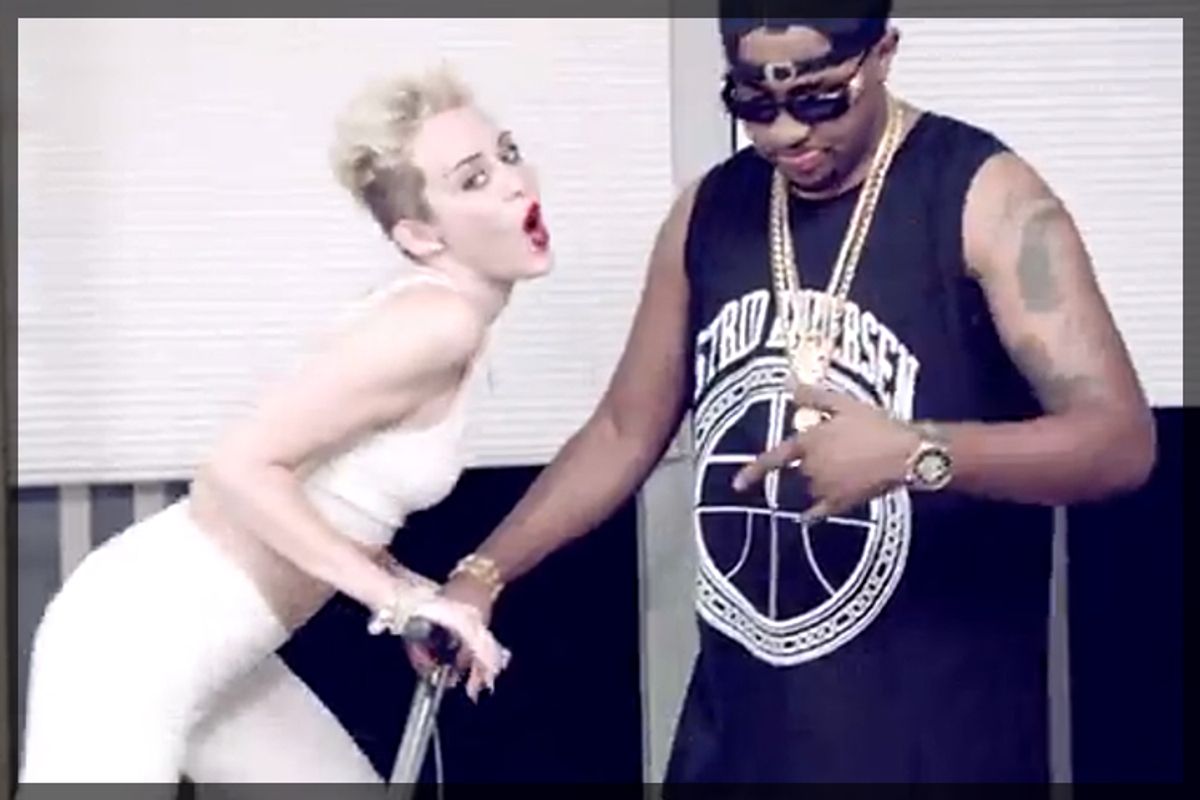 Miley Cyrus, the one-time tween-pop singer best known for sunny, innocent work like the TV series "Hannah Montana" or the hit song "Party in the U.S.A.," has spent the past several years trying to force the public to see her as an adult. She pole-danced at an awards show while singing "Party in the U.S.A.," alluded to her marijuana use in the pages of Rolling Stone, and recently released a comeback single, "We Can't Stop," rife with drug references.

But it's that song's video that really represents both Cyrus' most decisive attempt to position herself as a rebel and just how far she has to go to really be one. In the recently released clip, Cyrus clips a grill over her teeth and poses with three black women as she imitates the dance move "twerking" -- a fast-paced, sexually charged move that's been the subject of much recent hip-hop music and that's sometimes associated with strippers. Dodai Stewart, at Jezebel, described the clip:

In the video, Miley is seen with her "friends": Mostly skinny white boys and girls who appear to be models. But in a few scenes, she's seen twerking with three black women. Are they also her friends? Or is she just hoping for street cred? Note that she is wearing white, in the spotlight, the star of the video — and they are treated as props, a background for her to shine in front of.

Tricia Rose, a professor of Africana studies at Brown, director of the Center for the Study of Race and Ethnicity in America there, and author of "Black Noise: Rap Music and Black Culture in Contemporary America," took issue with Cyrus' use of stereotypically "black" tropes from the world of mass culture to indicate that she was a really wild partier: "Most of the knowledge about African-American culture is gleaned from mass culture. Miley Cyrus is like a lot of prep school kids who learn about black culture from hip-hop and speak to their friends in what they think is a black dialect. Miley is more connected to that constituency.

"The whole thing struck me as a high school disposition or attitude," she added, "that way of dressing up in what they think are transgressive ways, this idea that blackness equals transgression."

Cyrus is hardly the first celebrity, male or female, to embrace and decontextualize the very specific tropes of black culture and sexuality in order to be rebellious. Madonna re-appropriated black drag-ball culture with "Vogue" and the new jack swing sound with "Secret." More recently, said Rose, Justin Timberlake and Justin Bieber have both made forays into hip-hop. Cyrus isn't "any different than anyone else in the pop arena, but they have better handlers" -- like Bieber's consigliere, Usher -- "or are a tiny bit more literate."

"I take it all the way back to the Jazz Age, connections between Harlem Renaissance and the Lost Generation -- F. Scott Fitzgerald, Gertrude Stein, Ernest Hemingway -- they literally appropriate jazz tropes," said Reiland Rabaka, a professor of African-American studies at the University of Colorado at Boulder. "The name 'the Jazz Age' is from the title of a Fitzgerald book. She's tapping into something that suburban white youths don't realize -- she's doing what their grandparents did." Indeed, the recent film adaptation of "The Great Gatsby" featured not merely music by Jay-Z underscoring the lives and loves of wealthy white people but over-the-top caricatures of garish jazz musicians blowing trumpets and black people spilling champagne. They were at the edge of the frame, symbolizing excess and transgression whenever Daisy contemplated a life of sin. They may as well have been twerking toward East Egg.

But Timberlake and Bieber weren't attempting to capitalize on dance crazes that were particularly coded as sexual, like twerking, which has been widely popular for several months. "Why is this the one that got chosen? It satisfies a notion of black sexual deviance," said Rose.

And the spotlight Cyrus shines on the craze doesn't merely make her look edgy by association: It allows her to profit off others' work. "How many artists were into twerking long before she was?" asked Rabaka. "But she's going to get all the credit for it. It's the difference between Kenny G and John Coltrane. Many of these artists don't have those kind of platforms. The best they can do is put it on YouTube and pray for 100 people to click on it. And she's going to get millions." (Indeed, the "We Can't Stop" video has over 28 million views at this writing; one of the year's most popular singles, "Harlem Shake," was created by a white D.J. heavily sampling rap produced by black artists and borrowing the name of an unrelated hip-hop dance craze.)

Given the money to be made by artists all across the radio dial and the edgy image Cyrus can generate as a wealthy white girl acting like a disempowered stripper, her artistic choices make some financial sense. They make even more sense in the context of her general lack of understanding of how to talk about race, referring as she did recently to a love of "'hood' music" and her worries she would become "the white Nicki Minaj." But they may bear consequences that say a lot about the inequities that even wealthy white girls face in the entertainment industry.

Said Rose, citing the recent commercial misfortunes and online derision around Ke$ha and Kreayshawn: "White women pay a bigger price for performing the images of hip-hop. Girls pay a bigger price, and I don't understand why Justin Bieber doesn't take the same critique; appropriating black masculinity is a right of passage for white boys. White women aligned with black masculinity has to do with the way the patriarchy is racialized."

In other words, a white woman acting in a manner traditionally associated with black women, or acting out desire for a black man, threatens the hegemonic role white men play. No wonder Kim and Khloe Kardashian come in for such mockery for dating black athletes and musicians. No wonder Amanda Bynes' modeling her appearance on a black stripper is treated as symptomatic of her mania rather than a simple aesthetic choice.

It's next to impossible to strike the right balance, as a woman, between simply being oneself and acting in a manner proscribed by viewers' taste. (To say nothing of the fact that in order to be herself in her new video, Cyrus must look like, as Rose said, a "stripper male fantasy.") The buzz generated by a twerk might end up punishing Miley Cyrus, as though she's unwittingly gone too far, not merely in treating black people as accessories but making white fans uncomfortable.

And the video's biggest failure may be on an aesthetic level. As Rose noted: "She didn't even twerk! She seems incapable of that! She's trotting out three black women who twerk and lets them do a tiny bit."