The future of the "ex-gay" movement

Former Exodus International head Alan Chambers talked to Salon about shuttering the organization, and what's next 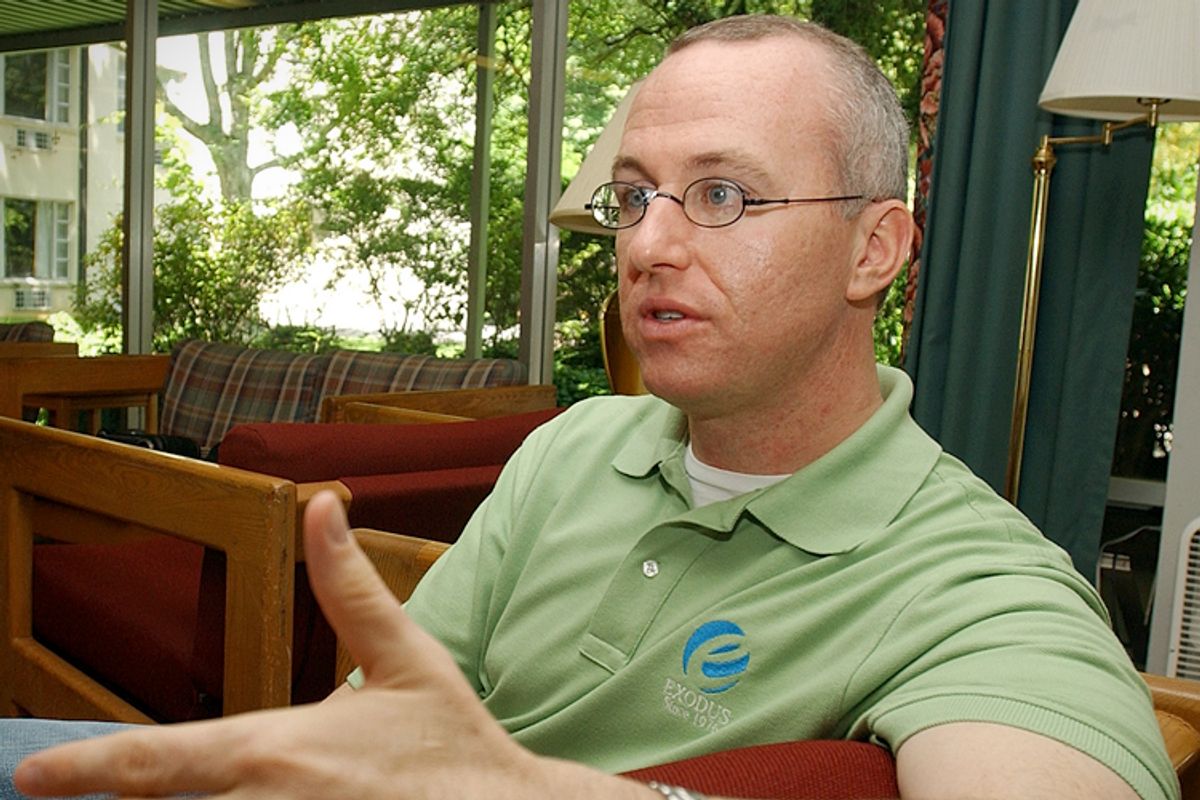 Alan Chambers stunned evangelical Christians and gay rights advocates last week with the news that Exodus International, the "ex-gay" ministry that he led for the last 12 of its 37-year existence, would be closing its doors for good. In a statement released just before the announcement that Exodus was no more, Chambers apologized to LGBT people for "years of undue suffering and judgment at the hands of the organization,” and said that his next venture would focus on "hosting thoughtful and safe conversations about gender and sexuality, while partnering with others to reduce fear, inspire hope, and cultivate human flourishing."

The announcement came as a shock to some, but the end of Exodus had been a long time coming, as Chambers told Salon. "In my gut I knew that would actually come to fruition at some point during my leadership," he said of the decision. "We've modified as much as we can modify; this organization still holds a lot of negative connotations and a lot of bad memories for people, and we needed to just simply close the doors."

The negative connotations and bad memories Chambers is referring to would be Exodus' decades-long history as a powerful lobby against gay rights and leading advocate for "reparative" therapy, a discredited treatment that claims to "cure" or minimize what those in the ex-gay movement call "unwanted same-sex attractions." For nearly four decades, the organization steadily referred LGBT Christians to practitioners of these pseudo-scientific therapies, which Chambers now admits, and a growing body of survivor testimonials confirm, were grossly abusive.

While Chambers has denounced reparative therapy, stepped back from politics and expressed a desire to promote acceptance and inclusivity for LGBT Christians, he hasn't changed his position on the core principle that grounded Exodus' work in the first place: that being gay goes against biblical edicts governing sexuality and that marriage, in his view, remains a one man-one woman institution. He noted as much in his apology, saying: "I cannot apologize for my deeply held biblical beliefs about the boundaries I see in scripture surrounding sex, but I will exercise my beliefs with great care and respect for those who do not share them."

These lingering ideologies, along with Chambers' continued support for elective celibacy among gay and lesbian Christians, are a problem for many of the people from whom he is seeking forgiveness.

Also at issue: his own sexuality. Chambers has spoken openly and candidly about what he calls the "choices" he's made; namely, to ignore his own attraction to men and remain married to his partner Leslie, with whom he has two adopted children. In an interview with Lisa Ling, Chambers identified himself as "Leslie-sex attracted," going on to write in a follow-up to the interview that he does not consider himself gay because "same-sex attraction ... absolutely fails to describe me or speak to the majority of my feelings, desires or sexuality.  I stop short of calling myself heterosexual, though, too."

This is where Chambers' beliefs -- evolving and complicated though they may be -- become downright incomprehensible to many of his critics.

How can Chambers hope to be an advocate and ally for LGBT individuals when he is repressing part of himself to conform to rigid Christian sexual mores? "I'm fighting to be straight" doesn't exactly scream "Free to be you and me."

Chambers sees this "choice" as personal, he says.

"Those things only really serve me and how I live my life and how I govern my life. They don't impact anyone else. I'm not out to deny someone rights. I'm not out to tell someone that they should live or believe or behave as I do. You know, we live in a very pluralistic world where we have multiple religions, multiple political parties, multiple sexualities -- there's so many points of diversity in our culture; we have to respect those things and allow people to be who they are. As long as we're not imposing those beliefs on others, I think they should be respected."

This framing is something Chambers pivots back and forth between in his conversation with Salon, never fully landing on or sticking to an answer about whether being gay is "OK" or just "a reality" to deal with; never sounding exactly comfortable articulating anything beyond a desire to promote peace and acceptance. When asked if he will tell Christian parents of LGBT kids that being gay is OK, he says he will tell them to put love and their family first, but "I'm not here to tell someone how they should believe when it comes to morality," he says. "It's not for me to say what is OK and what isn't OK."

Chambers' post-Exodus middle space will become all the more murky when he tries to put it into practice in his future ventures. "Gay and lesbian people are wonderful people who deserve nothing less than anyone else in our culture deserves," he says. "The same respect, the same love, the same relationships and opportunities."

But acceptance and opportunity for LGBT people is inextricably bound up with a legislative agenda Chambers wants to steer clear of: the drive to secure equal marriage rights and more than 1,000 attendant benefits for gay couples, to pass the Employment Non-Discrimination Act to protect LGBT workers from job discrimination, and a number of other very real, very concrete ways that LGBT people and their allies are working to secure dignity, respect and equality under the law.

Chambers sees how this may become a problem down the line, but isn't ready to go there yet: "As far as politics go, I don't know what I believe politically about so many things. Politics isn't what rules my life and what I find is so often it ruins conversation and it ruins relationships, so I'm happy to leave that out of the conversation."

On whether or not it's a position he'll revisit in the future, Chambers isn't sure, and like so many other questions left to answer about his post-Exodus worldview, he isn't quite ready to commit: "Maybe that will be something that we try to figure out in the future. I'm not saying there shouldn't be a conversation around it ... I realize it's difficult not to get into the issue of politics, and maybe that will be something that changes in the future with regards to the conversation -- but not the activism or lobbying."

Chambers' place in the nebulous middle ground may gain him some traction in a polarized evangelical community unfamiliar and often hostile toward LGBT people. His "live and let live" approach could help parents reach a place of basic acceptance with their LGBT children -- and that's an unadulterated good. Ditto for the closure of Exodus, which, as Chambers says, needed to close its doors to truly atone for its history.

But his slow, baby-steps evolution away from the "ex-gay" movement and toward an accepting (but ambiguous) future might also prove to be an obstacle to the effectiveness of Chambers' stated desire of being a bridge builder on a broader scale. His abandonment of the hard line has certainly alienated many among his Christian base, but it's unclear if his evolution toward something resembling acceptance will pull anyone else in, particularly anyone among the LGBT community he's trying to reach out to.