Rulings on DOMA and Prop 8 are slated for Thursday, but the Family Policy Institute of Washington got over-excited 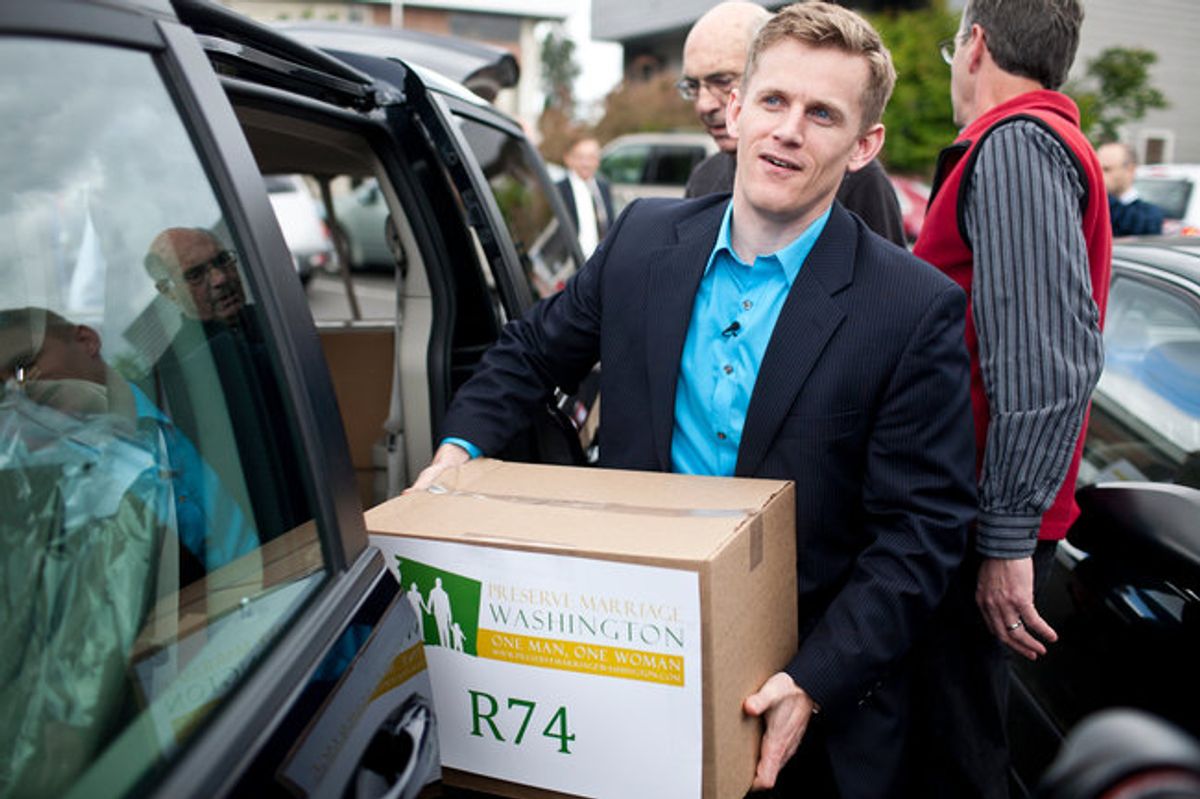 The United States Supreme Court is slated to announce decisions on the Defense of Marriage Act and California's Proposition 8 on Thursday, and the Family Policy Institute of Washington, a D.C.-based anti-gay rights group, has statements prepared to address all possible outcomes.

There's nothing unusual about preparing press statements in advance. What is strange, however, is releasing them all at once -- before the high court announces its rulings.

Naturally, that's exactly what the institute did.

After breaking possible outcomes into the categories of "win-win," "partial win" and "lose-lose," the group went ahead and published all of them at once.

…“I applaud the United States Supreme Court’s decision to uphold the constitutionality of the.  They were correct to rule that the U.S. Constitution does not include a “right” of same-sex couples to have their relationships officially affirmed as “marriages.”  We agree that the public’s interest in promoting responsible procreation provides a rational basis for defining marriage as the union of one man and one woman.  The Court did the right thing by permitting the debate over the definition of marriage to continue through the democratic process.”

And a "partial win" ("the debate will continue"):

…“Those who want to redefine marriage suffered an important defeat today. The Supreme Court refused to declare a constitutional right to same-sex “marriage,” and rejected their request to impose a redefinition of marriage on all fifty states. This decision means that this important debate will continue state by state across the country.”

Today the Supreme Court struck down the federal Defense of Marriage Act and California’s Prop 8 and declared a constitutional right to marry someone of the same gender. anyone you want…maybe.

Joseph Backholm, executive director of the Family Policy Institute of Washington, said, “The Court reached this decision only by ignoring reality—that male-female unions are uniquely important, because only they can result in natural reproduction; and that such unions are uniquely valuable, in that only they can bind a child to both the parents who created it and bind those parents to each other.”

In addition to its departure from scientific reality, the Court’s decision was a shocking abuse of its power—the ultimate in judicial activism, making law from the bench rather than interpreting the law and the Constitution as written.

Backholm continued, “It is absurd for the Court to argue that any of the Constitution’s authors either granted, through its text, or intended to grant, through its spirit, a “right” for two men or two women to “marry.” In reaching a decision so lacking in foundation in the text of the Constitution, or in the history or traditions of our country, the Court raises serious questions about its legitimacy.”

In overturning the laws of 38 states, and the constitutions of 30, the Supreme Court has launched a shocking assault on our system of federalism, as well as upon the right of the people to govern themselves.

Naturally, the group scrubbed the releases from its website once the Internet started mocking the mistake.