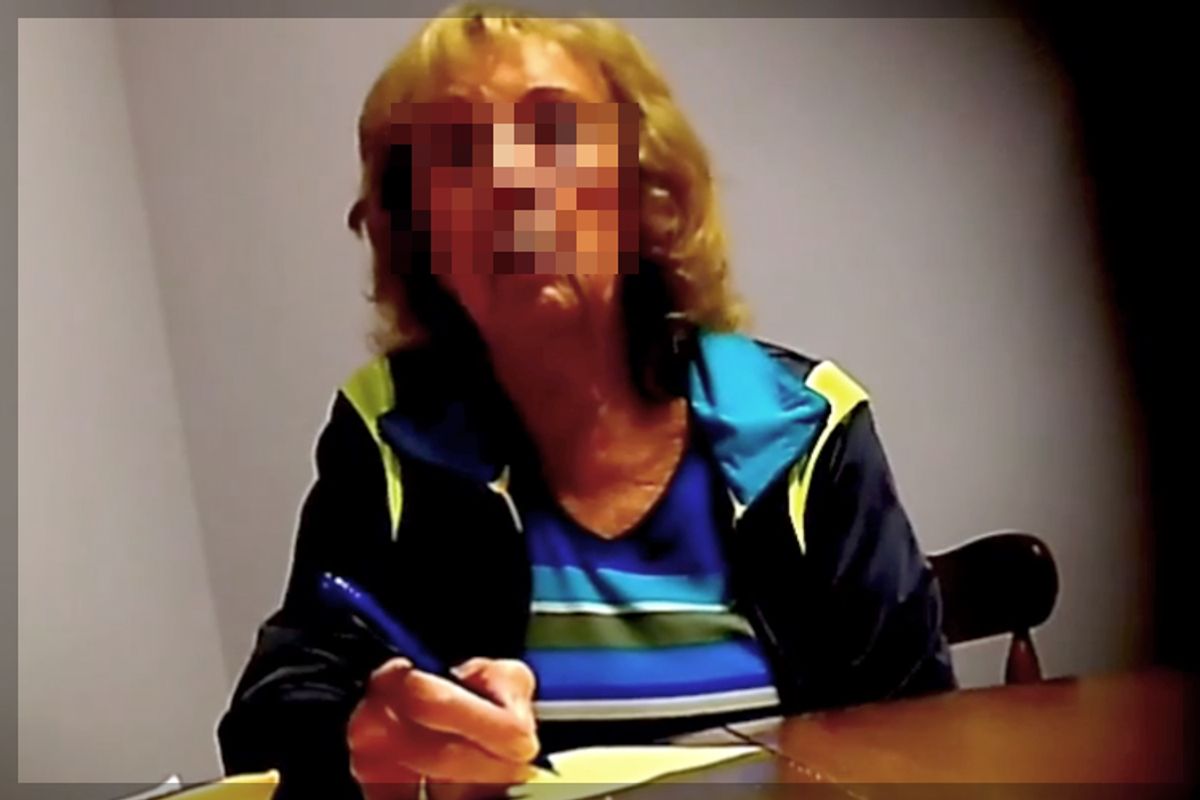 In a secretly recorded video (embedded at the bottom of this story), a young woman named Kate, 19, tells a counselor at Cleveland's Womankind "maternal and prenatal care" center, “Usually we use condoms, but yesterday we didn’t.” She's taken a pregnancy test, but is told it is probably too soon. Then Kate asks, “Like, I know there’s a pill you can take to not get pregnant. And I don’t know if you have to go to the doctor?”

After some confusion, the counselor replies inaccurately, “It sounds like the morning after pill. If you have intercourse and then take this pill and it causes a period to come on or something, or bleeding. It’s like having kind of an abortion.” She adds, “That could harm you. It really could harm you ... You could hemorrhage from anything like that.”

“Kate” is Katie Stack, a 24-year-old pro-choice activist and patients’ advocate at an Ohio abortion clinic, though she gave the counselor a different last name. Stack is also a founder of the Crisis Project, which films undercover video at crisis pregnancy centers like Cleveland’s Womankind and records the often medically suspect advice given there. And Womankind is one of thousands of clinics across the country that seek to dissuade women from having abortions. Unlike many of those centers, which gauzily gloss over whether they're actually clinics, it actually offers prenatal care from medical professionals, but that doesn't mean it dispenses accurate information.

Whether the counselor was misinformed or intentionally misleading, her advice on emergency contraception was false. The so-called morning after pill, or emergency contraception, has been shown only to block ovulation to prevent fertilization after unprotected sex; it’s decidedly not an abortion. It is entirely distinct from medication abortion, which can only be taken at a doctor’s office, and which does cause bleeding by inducing a miscarriage. By contrast, the possible side effects for Plan B, the most commonly taken form of emergency contraception, are listed as changes in your period, nausea, lower abdominal pain, fatigue, headache, dizziness and breast tenderness. The counselor did seem to be vaguely aware of the distinction, saying of the pills in question, "I know people do buy it over the counter, but is that wise? Something somebody else might do you don’t do."

Despite the fact that the fictional Kate would have a good chance at preventing an unplanned pregnancy, and perhaps an abortion, with the morning-after pill, the counselor also asks her, "Why do you have sex? You’re not married." After saying sex is a responsibility, the counselor adds, "It has consequences and you don’t want to put the consequences on having to harm yourself. And harming yourself would be having an abortion. Or taking the pill after. Because sometimes taking a pill like that could cause more bleeding than what you think. It would only take you to the emergency room and you having to take care of what’s happening. A lot of those things, you probably could read online, on the Internet, the risks in taking something like that would be. There’s risks in anything. It could leave damage to the cervix, it could mean hemorrhaging."

Crisis pregnancy centers -- of late, known simply as pregnancy centers -- are the foot soldiers of the antiabortion movement, seeking to put a warm and helpful face on it, and to counteract claims that they don’t care about women. In an interview with the New York Times, an Americans United for Life official called the centers “the darlings of the pro-life movement.” The Times put the count of crisis pregnancy centers at 2,500, compared to 1,800 abortion providers. State-level antiabortion leaders like Rick Perry have repeatedly touted the centers, including attempting to replace Planned Parenthood with them, despite the fact that they generally don’t provide services like pap smears, contraceptive prescriptions and breast exams.

Stack was inspired to start the project after her own real-life experience as a scared teen visiting one. Though she had an appointment at a Planned Parenthood clinic for an abortion, she visited an Iowa clinic closer to her home. " The “counseling” that I received included the following," Stack wrote in a 2011 New York Times Op-Ed. "I was cautioned that abortions caused breast cancer, even though the National Cancer Institute has found serious flaws in all research that suggests so. I was warned that I would inevitably suffer from post-abortion stress syndrome, even though the American Psychological Association says there is no evidence of increased mental health problems among women who have an abortion in the first trimester. I was told that I would not hear this information from doctors, because doctors make money performing abortions and would lie about the procedure’s risks."

Of course, the more famous secret recordings in abortion politics are on the right, with Live Action's stings on Planned Parenthood and independent abortion clinics. Stack says there's a difference: "The videos that Live Action puts out are promoting the myths and the fears that the antiabortion movement, such as the idea that abortion clinics cover up sex trafficking. Whereas our work is really much more investigative. We’re not creating unusual scenarios, we’re not looking to prove a particular thesis necessarily. We’re just going in there and letting them talk."

Though these centers claim they are merely expressing their right to dissuade women from having abortions and not actively misleading them, Stack points out that Abby Johnson, a former Planned Parenthood employee turned antiabortion activist, gave a workshop at Heartbeat International's 2012 conference titled "Competing With the Abortion Industry." According to audio of the event, Johnson told participants, "We want to look professional. We want to look businesslike. And yeah, we do kind of want to look medical." She discouraged them from foregrounding their religious affiliation, so as to better trick women: "We want to appear neutral on the outside. The best call, the best client you ever get is one that thinks they're walking into an abortion clinic. Those are the best clients that could ever walk in your door or call your center, the ones that think you provide abortions."

Johnson also told the audience of crisis pregnancy center directors to say, when asked about abortion, "No, we do not provide abortion services, but we do provide ultrasounds, and you're going to need to have your abortion. And that's true. So you don't have to say, no, we have a baby boutique, and we have pregnancy testing ... No. You want them in your center. That day, if you can."

Efforts to regulate the centers have gotten tied up in courts. Several cities and counties, including New York, San Francisco, Austin and Baltimore, have passed laws requiring the centers to state in one form or another that they don't have doctors on the premises or that they don't perform or refer for abortions. Some of the regulations have extended to the centers' willfully unspecific and ubiquitous advertising. In May, Rep. Carolyn Maloney introduced the Stop Deceptive Advertising for Women's Services Act, which would "direct the Federal Trade Commission to prescribe rules prohibiting deceptive advertising of abortion services." But such laws have run up against thus far successful arguments that the centers don’t charge women for counseling and thus haven’t been considered commerce that can be regulated, but rather expressions protected under the First Amendment.

In the meantime, Stack says that she's seeing more and more clinics adding medical professionals for ultrasounds and prenatal care, presumably in an attempt to counteract criticism that they don't offer medical services. In her work at an Ohio abortion clinic, Stack often sees patients who have already been to crisis pregnancy centers. "For the most part it’s correcting misinformation and helping them feel like they get to make this decision for themselves," she says. Still, she notes, in those cases, at least, "they still come to the abortion clinic."

Salon reached out to Womankind and Abby Johnson for comment, but they did not respond.