Is the far right driving gray wolves to extinction?

The Fish and Wildlife Service bows to pressure from antigovernment groups, removing the animals' endangered status 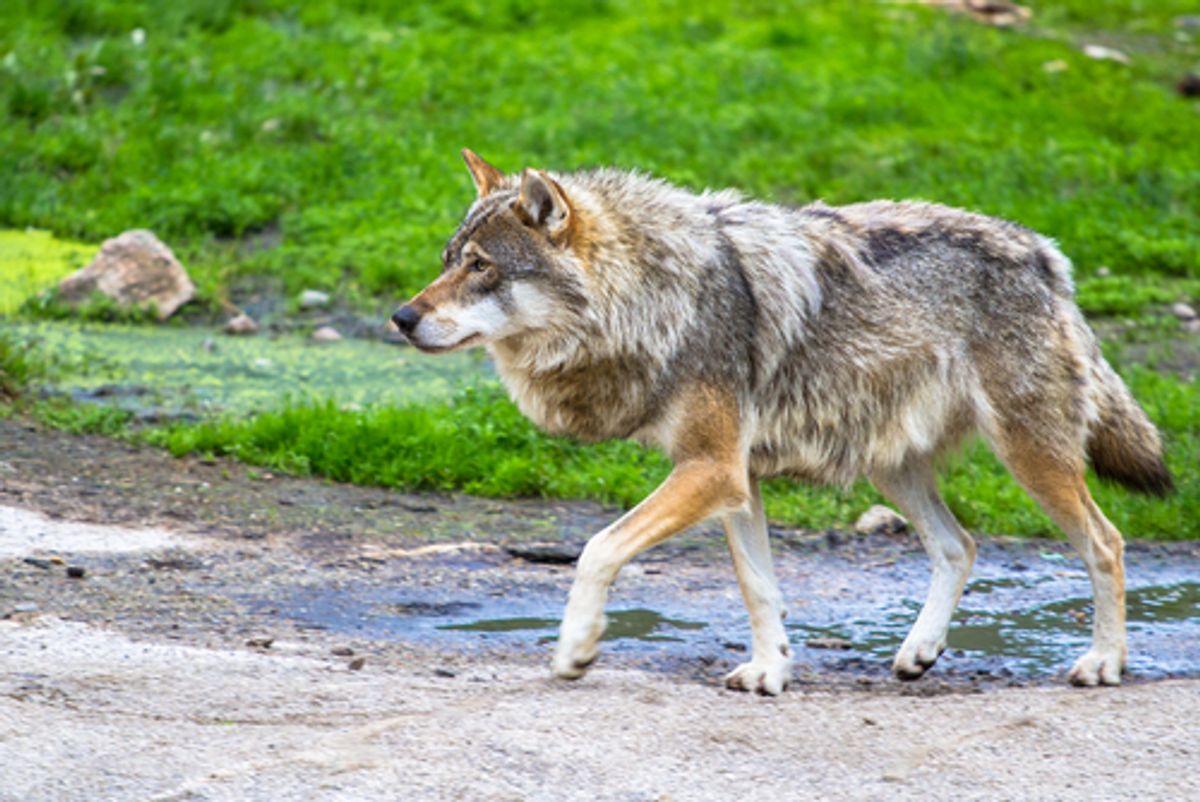 The US Fish and Wildlife Service’s recent announcement that it is beginning the process for removing gray wolves across the country from the protection of the Endangered Species Act surprised no one. The Fish and Wildlife Service’s mid-1990s reintroduction of gray wolves — a species virtually extirpated in the nineteenth and twentieth centuries — into Yellowstone National Park and central Idaho marked a triumph for conservationists and ranks as one of the most striking fulfillments of the Endangered Species Act. But as I have reported here and here, the wolves quickly met enemies.

By the early 2000s a loose coalition of hunters’ groups, outfitters, and ranchers — along with the many disaffected men embracing militia groups, local “sovereignty” and states rights, particularly rights to use public lands without federal regulation — coalesced around the idea that wolves represented icons of the hated federal government. The wolves, they all-but-screamed, constituted lethal threats to deer and elk, livestock, and ultimately, people. The long, bitter wolf war reached its climax in the summer of 2011, when Congress took the unprecedented act of removing the wolf populations of the Northern Rockies from the endangered species list. In May 2011, the Fish and Wildlife Service, weary of the many problems involved in wolf management (or, rather, public relations management), delisted gray wolves in the Western Great Lakes states, where some 4,400 wolves resided.   Idaho, Montana and Wyoming subsequently initiated hunts and the use of government marksmen to reduce wolf numbers from around 1,700 to a much lower level.

The FWS’s proposed delisting of gray wolves across the country is simply the continuation of the agency’s long retreat in the face of wolf hater intimidation. Still, it’s important to understand how the FWS legitimizes its abandonment of wolves. A close examination of the FWS’ proposed rule change is a case study in the politicization of science. The FWS report excels at cherry picking, choosing certain scientific studies while rejecting others. It’s also an excellent example of bureaucratic hand-waving, simply dismissing long established facts whenever they become inconvenient. The final result is like a weird game of scientific Twister: The FWS bends itself into all sorts of contortions to conform to a political agenda.

Repetitive and often inconsistent, the 215-page proposed rule makes two stunning claims.  First, the FWS says “new information on C. lupus taxonomy” published in 2012 reveals that the gray wolves (C. lupus) do not constitute “either an entire species nor an entire single subspecies.” Simply put, C. lupus “does not represent a valid species under the [Endangered Species] Act”  — and thus cannot be listed as endangered. Having decided that gray wolves are not a valid species, the FWS then deconstructs the category, saying all wolves formerly called gray actually belong to one of three subspecies of wolves and one new species.

The FWS then makes the rather bizarre claims that the agency wasn’t really serious when, back in 1978, it listed gray wolves as endangered across an historical range covering most of the lower 48 states (except Minnesota, where it was listed as “threatened”). Rather, the agency now claims, the 1978 reclassification “was undertaken to ‘most conveniently’ handle a listing that needed to be revised because of changes in our understanding of gray wolf taxonomy, and in recognition of the fact that individual wolves sometimes cross subspecies [geographic] boundaries.” Now, the FWS argues, “this generalized approach to the listing … was misread by some publics as an expression of a larger wolf recovery not required by the Act and never intended by the Service.” Evidently the FWS never really had wolf recovery as a goal.

In place of this unintended “larger wolf recovery,” the FWS in its newly proposed rule lists three subspecies and alludes to one new wolf species, each with a limited population size and a clearly limited range.  Conceptually, deconstructing the gray wolf category constitutes a containment strategy, a way to scientifically legitimize small, remnant wolf populations restricted to finite ranges; wide-ranging wolf dispersal is eliminated as a possibility. This containment appeases politicians, government administrators, businesses, ranchers  and hunters — all those who fear disruption from  wolf recovery.

What the FWS used to call the gray wolves living in Northern Rocky Mountains, — a “Distinct Population Segment” in biology nomenclature —  is now conceptualized as the wolf subspecies,  C. l. occidentalis.  Wolves classified as occidentalis , according to the FWS, “currently occupy nearly the entire historical range of the species.” In what I can only call an act of scientific chutzpah, the FWS therefore argues that these wolves are considered fully recovered. And since they are fully recovered and are occupying their historical range, then any occidentalis  that disperse to Washington, Oregon or Colorado are classified as a non-native species. Although individual states might choose to list them as endangered—Washington and Oregon have done this — they will not qualify as a federally protected Distinct Population Segment of gray wolves. That’s because the FWS no longer considers gray wolves to be a valid species. Nice circular logic, that.

The FWS is also playing this same shell game in the Western Great Lakes states of Minnesota, Michigan, and Wisconsin. Wolves living there formerly were classified as a Distinct Population Segment of gray wolves.  It used to be that if any of these wolves migrated outside these states — say to North and South Dakota — then they received protection by the Endangered Species Act. Now, under the proposed rule change, the wolves in the Western Great Lakes are classified asCanis Iupus nubilus. Although the FWS acknowledges that C. I. nubilus does not occupy all of its historical range — a vast area that once included the Southern Rocky Mountains, the Colorado Plateau, and the coastal ranges of the Pacific Northwest — the agency still makes the case that the subspecies is present in sufficient numbers in the Western Great Lakes and Canada to be considered fully recovered. So it shouldn’t be protected by the ESA, either.

Interestingly, although the FWS considers eastern Canada to be part of the range of C. l. nubilus, it now argues that no wolves of this subspecies ever settled south of Quebec, in New England and upstate New York.  Instead, the FWS says an entirely different wolf species, Canis lycaon, once lived there. No population estimates of Canis lycaon are given; nor does the FWS name areas where packs have been sighted. The FWS does not even propose listing at the present, saying “we must first address outstanding science and policy questions.” It’s not at all clear if real wolves belonging to Canis lycaon exist. But if the Northeast is classified as belonging to the historical range of Canis lycaon, then any gray wolves (C. l. nubilus) that migrate into the region will not be protected by the ESA.  Once again, the FWS proposes creating a new species in order to remove protection for another one.

(If you’re having problem tracking all of these different species and subspecies, don’t feel bad. All of the taxonomical shenanigans seem designed to confuse the public.)

There is one bright spot in this otherwise gloomy picture. One subspecies of the supposedly no longer valid Canis lupis  will receive protection under the proposed rule: the Mexican wolf, or C. l. baileyi.  A tiny remnant population of Mexican wolves — abount 75 — live in eastern Arizona and western New Mexico. Another 250 live in captivity in the US and Mexico awaiting reintroduction to the wild. The FWS wants to maintain the endangered listing for C. l. baileyi, saying it is “in danger of extinction throughout all of its range due to small population size, illegal killing, inbreeding, and the cumulative effect of all threats.” The FWS says its interim goal is to support 100 wolves, at first glance a significant improvement.

But it remains uncertain how — or whether — the FWS proposes to bolster the population of Mexican wolves. In 2011 a subdivision of the FWS tasked with developing a plan for Mexican wolf recovery concluded that the agency would need needed three distinct recovery areas connected by corridors across parts of Arizona, New Mexico, Colorado, Utah, and Texas, with each area to become home for 200 to 350 wolves. The head of the Mexican Wolf Recovery Team immediately came under massive political pressure from state wildlife agencies and the governor of Utah, who made a range of political and economic arguments to curtail the scientists’ recovery plan. Unsurprisingly, the June 7 proposed rule says nothing about what full recovery would entail.

Public Employees for Environmental Responsibility (PEER) has filed a lawsuit against the FWS under the Freedom of Information Act asking for all documents related to the June 7 rule on wolf delisting. PEER executive director Jeff Ruch thinks his group will begin to receive documents by late July. “We’ll post all their dirty laundry on our website,” he says. PEER will thus provide a preview of the documentary record long before the Fish and Wildlife Service completes its year-long rule-making process. If the rule becomes finalized as official policy and gray wolves abolished as a species, conversation organizations will challenge it in court.

Some wolf advocates hope the taxonomical shell game will be so crude and obvious that public outcry over wolf delisting will persuade the Obama administration to withdraw the proposal. Noah Greenwald from the Center of Biological Diversity argues, “ The majority of Americans support protection of endangered species, support protection for wolves. I would like to think the Obama administration is not tone deaf.”

Nabeki of the Howling for Justice blog concurs. She told me: “This may just backfire on them. It’s so transparent to delist wolves in states where they don’t exist. It will open up people’s eyes.”