Is the "fat acceptance" movement losing?

After Paula Deen's fall and Chris Christie's gastric bypass, it seems easier than ever to get away with fat-shaming 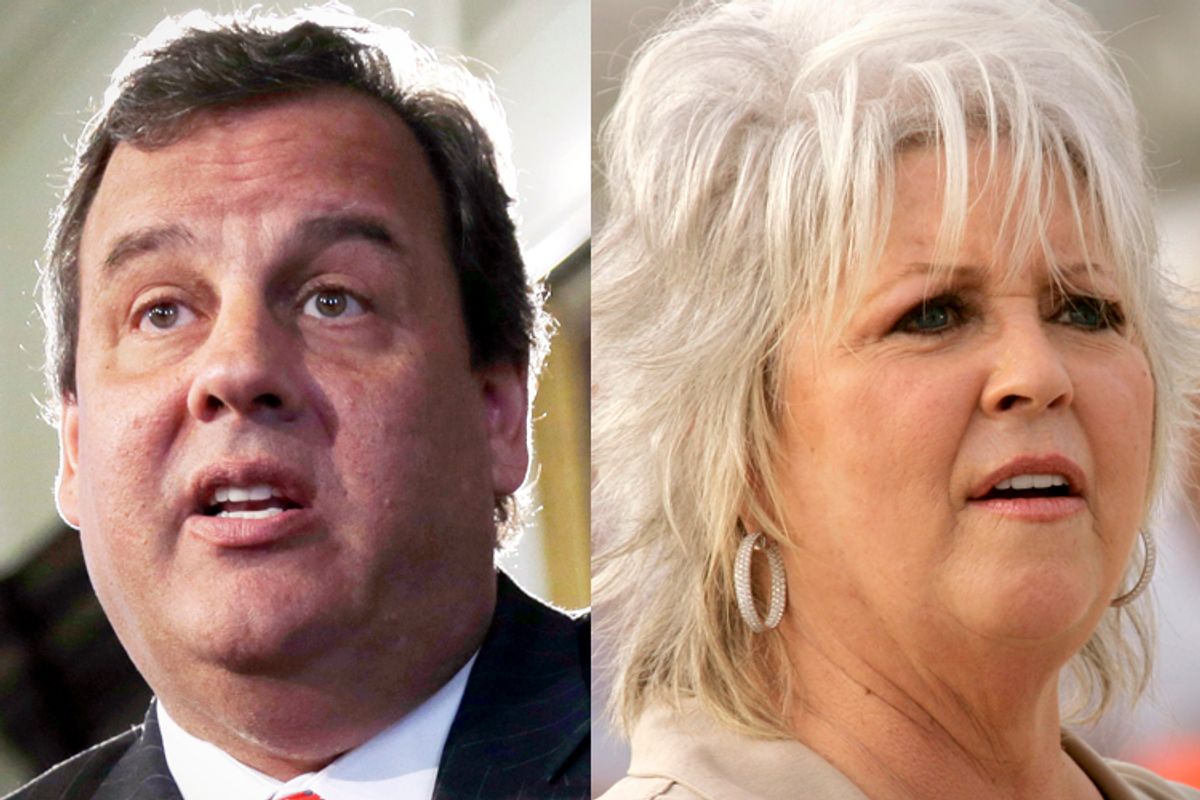 There are many things wrong with Paula Deen's admitted use of racial slurs. But her weight isn't one of them.

The celebrity cook, whose butter-laden recipes have come in for much critique over the years (not least when she admitted to Type II diabetes right before promoting a pharmaceutical product), is particularly open to criticism now that she's been fired from the Food Network for her racist comments.

But a New York Times photo of Deen's supporters, private citizens who disagreed with her firing and were visiting her Georgia restaurant, prompted plenty of commentary online about how those supporters looked. One example, from the New York Times's media critic, is below:

This came the same week as actor James Gandolfini's premature death of a heart attack and a postmortem that included almost gleeful coverage in the New York tabloids of his final hours eating and drinking in Italy, as well as the American Medical Association's declaration that obesity is a disease. It came in the midst of the popular novelist Lionel Shriver's publicity blitz for her novel "Big Brother," depicting a woman who puts her obese -- and, the reader is meant to understand in no uncertain terms, physically disgusting -- brother, who can barely stop from soiling himself, on a liquid diet. It was based in part on Shriver's experience with her own late brother, about whom she had written in 2009, "I can't support any political movement that would have him believe he can be 'healthy at any size.'"

It would seem that it's never been safer to be cruel to fat folks; even New Jersey Gov. Chris Christie, who'd long appeared confident in his skin despite mockery from late-night hosts, has bowed to political pressure (as well as health concerns) and undergone gastric bypass. Since the 1970s, the fat acceptance movement  has been advocating for the rights of fat people to go through life unbothered by mockery or health policing -- but is that movement in retrograde in the era of organic everything?

Marianne Kirby, who blogs at the Rotund and considers herself a fat acceptance advocate, told Salon that there had been some positive changes -- albeit incremental ones. "We make progress in waves," she said, noting that online retailer ModCloth had recently dramatically improved its plus-size offerings. "But I don't know that I'm ready to say that there's all this great progress when you still can't go to the doctor without a certain element of fear."

While fat-acceptance thought leaders tend to agree that the Internet has improved the ability of true believers to reach one another, the discourse around fat celebrities calls into question how much mainstream attitudes have really changed. "It does seem safe still to make fun of fat people openly in manners that may have calmed down for other marginalized people," said Michelle Allison, who blogs at the Fat Nutritionist. "Making fun of or criticizing fat people is OK, because there's always a ready excuse: I'm just worried about your health."

And so an aesthetic critique of how the "tractor-sized" Melissa McCarthy appears on-screen by film critic (and my former colleague) Rex Reed gets reframed as a statement of concern for McCarthy's health. As Reed told Us Weekly: "It is not remotely humorous, and every obese comedian who ever made jokes about the disease are now dead from strokes, heart disease, high blood pressure, and diabetes." When I tweeted about Reed's comments, a follower of mine replied: "I am a fan of her, but pretending she is not going to drop dead at an early age is dumb."

Allison referred to this as "the just world fallacy," a notion that the thin can outrun death. "Our culture is not good about talking about these things as realities that we all will face. Nobody wants to talk about that in a realistic manner. What happens when someone who is fat dies prematurely -- it's like when Amy Winehouse, another person who met the stereotypes of a classically unhealthy person, died. People were ghoulishly gleeful. But if I do everything right, terrible things won't happen to me. Terrible things happen to other people because they did something terrible."

And it's not just premature death that's confounded with obesity in the public mind -- fat is a marker, too, of low social standing. "I think it's a distancing technique," said Lesley Kinzel, an xoJane blogger. "By condemning Paula Deen's supporters as ignorant fat people, that 'Honey Boo Boo' stereotype, people get to pretend they're not part of institutionalized racism. In a lot of cases, that's simply not true. But they can say, I'm not in line in Savannah with my ass hanging out in leggings, so I'm doing OK."

It's yet one more pressure for fat people to bear -- not only do observers presume their character flaws are somehow related to their physical appearance, but no matter when they pass away, their death will be occasion for second-guessing. And public obsession with their weight may actually make them less healthy. "There's growing evidence to suggest that stigma may play a big role" in ill health, said Golda Poretsky, a fat-positive "body love coach." "Being fat is stressful, not inherently, but because our society is so hateful to fat people."

The mere fact that the fat acceptance movement is so much composed of women speaks to systemic problems in how our society views fat people. ("Men's bodies are not necessarily subject to the same kind of scrutiny women's are," said Kirby. "With the Internet, men's bodies are coming under the same gaze a bit more -- but I don't know if that's a good thing.") And Deen's crumbling empire, one undone not by the fat content of her recipes but by her own cruel biases, would seem to prove that a disgust at the obese remains a safe prejudice -- critics apparently saw no contradiction in poking fun at her supporters' size even as they called out her bigotry. Said Kirby: "When we still expect the sort of response that the picture of Paula Deen's supporters got, it's hard to say that since I can buy clothes on the Internet, things must be better."