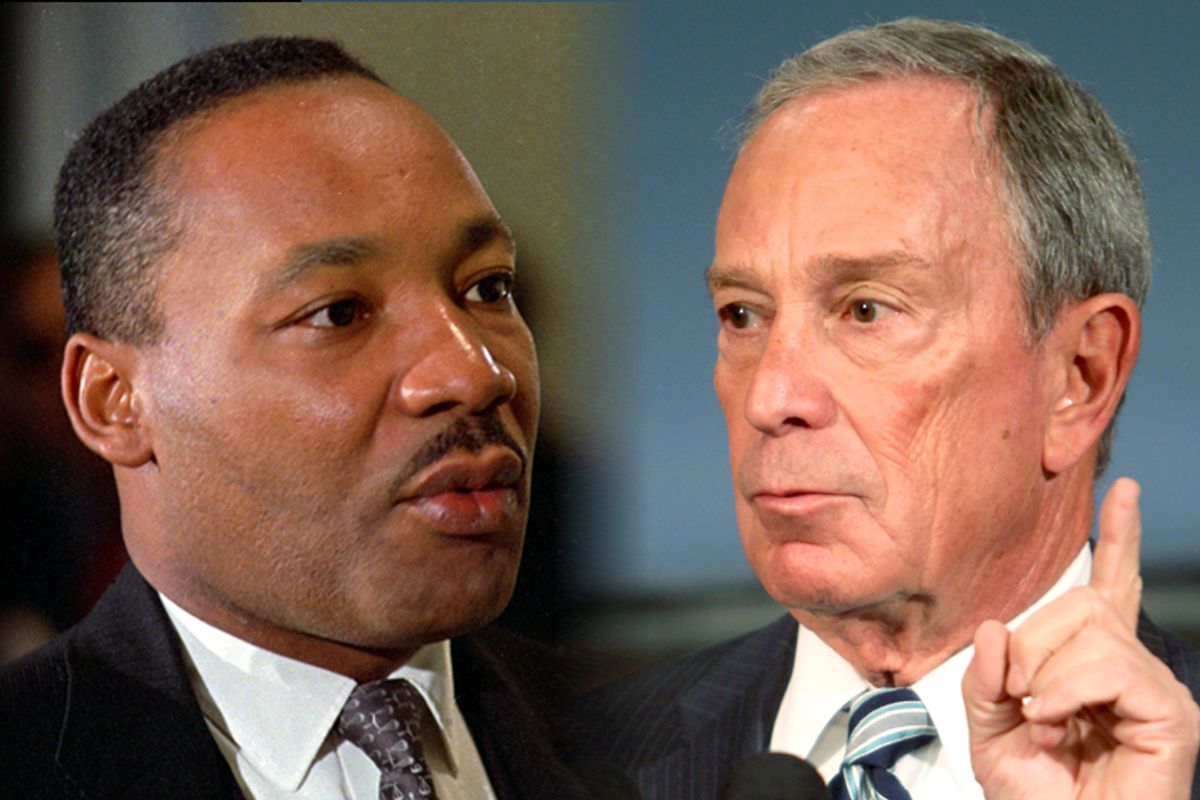 Martin Luther King Jr. thought that poor whites as well as nonwhites should benefit from compensatory programs. Bayard Rustin, the organizer of the March on Washington, argued correctly that race-based public policies would help to destroy the fragile coalition between civil rights activists and the white working class. Christopher Lasch dismissed affirmative action in college admissions and business set-asides as cynical, low-cost ploys to co-opt nonwhite elites. And progressives like Richard Kahlenberg continue to make the liberal case for class-conscious but race-neutral approaches to public policy.

The American center-left has long united groups with little in common other than opposition to unregulated industrial capitalism. The original charity liberals were the Progressives of the early 1900s, who tended to be upper-middle-class Protestants like Woodrow Wilson who took a paternalistic approach to reform. The original solidarity liberals were the two groups that made up the early 20th century farmer-labor coalition in the U.S.—Jeffersonian rural populists of the school of William Jennings Bryan, and organized labor activists, whose constituencies tended to be European immigrants in the industrial cities. Despite their differences, the rural liberals and the labor liberals tended to have a similar bottom-up approach to politics, which often put them at odds with the top-down strategy of elite Progressives who otherwise shared many of the same enemies and the same goals.

Charity liberalism, I would suggest, imagines that society is divided three ways. There is the Irrational Majority, the Bad Elite and the Good Elite. From the days of J.S. Mill, who wanted college-educated voters to have extra votes, to Cass Sunstein, who wants government officials to trick the unthinking masses into pursuing their self-interest by manipulative “nudges,” a powerful strain of Anglo-American liberalism has had a low opinion of the rationality of most citizens.

But public irrationality and prejudice are not the only threats to the public interest, in the worldview of the charity liberal. The elite itself is divided into a bad wing — usually identified with powerful economic elites — and a good wing — often identified with the professional class, particularly college-educated career civil servants, tenured professors, nonprofit activists and journalists. The enlightened technocrats of the Good Elite should be entrusted with a great deal of discretionary power to promote the public interest, which they can perceive without bias (unlike the Irrational Majority) and can promote without selfishness (unlike the Bad Elite).

Solidarity liberals have their own triple division of society. There is an Untrustworthy Elite, a Good Majority and a Bad Majority.

Reflecting their roots in rural populism or union activism, solidarity liberals have a populist suspicion of all elites — including liberal elites. They do not trust their elite enemies to do the right thing. Nor do they trust their upscale friends.

At the same time, solidarity liberals do not trust themselves as a group to do the right thing. Although they are instinctive majoritarians, they distinguish between the Good Majority and the Bad Majority. These are not necessarily two different majorities, but may be the same group in different states of mind, like Dr. Jekyll and Mr. Hyde.

At the same time, to prevent the majority from using the law to advantage itself at the expense of minorities, solidarity liberals believe that laws and programs should be universal. Laws restrain the discretion of untrustworthy elites, and universalist laws restrain the selfishness of the majority.

The separation of powers. Ever since Professor Woodrow Wilson became an academic celebrity before he became a politician with his attack on “congressional government,” progressives of the charity liberal school have sought to minimize the power of elected bodies — Congress, state legislatures, city councils — while maximizing the power of other branches and agencies — presidents, governors, city managers, judges, civil servants. The early progressives were in love with the idea of the impartial, technocratic “administrator.” Influenced by the role of the judiciary in the civil rights era, in the second half of the 20th century many liberals transferred their faith from reformist administrators to crusading judges. Today this belief in impartial hero figures who rise above petty politics informs the Bloombergian “No Labels’ movement and the cult of bipartisan “grand bargains,” to say nothing of the style and strategy of a certain “purple president.”

Solidarity liberals do not believe that wise, benevolent, Ivy League-educated executive branch appointees, career civil servants or judges will save us from stupid or misguided legislators. Bad legislators should be voted out in favor of good legislators. But democratic legislatures themselves should not be drained of their powers by unelected bodies, whose officers are likely to be as corrupt or foolish as legislators but less accountable. The cure for bad politics is not the absence of politics but better politics.

The welfare state. Solidarity liberals traditionally have favored universal, contributary social programs like Social Security and Medicare. Even if there is some mild redistribution, everybody pays and everybody receives benefits. In contrast, charity liberals, from the 1900s to the present, have often preferred means-tested programs focused directly on the poor. In the 1900s, many elite progressives disdained middle-class social insurance while favoring micromanagement of the behavior of the poor by upper-middle-class social workers. In the 2000s, charity liberals sometimes join conservatives in arguing that means-testing social programs like Social Security could free up more money for means-tested programs for which only the poor are eligible. Solidarity liberalism wants a fraternal welfare state; charity liberalism wants a paternalistic welfare state.

Race-based affirmative action in college admissions is a perfect example of the faith in discretionary elite power that is characteristic of charity liberalism. The goal of defenders of affirmative action is not to mandate higher representation of blacks or Latinos in college classes by straightforward law mandating particular numerical quotas. No, the defenders of affirmative action want to maximize the discretion of university admissions committees to engage, as they see fit, in allegedly benign racial discrimination against over-represented groups — non-Hispanic whites and Asian-Americans — on behalf of under-represented groups — blacks and Latinos. In other words, these committees of academic functionaries not only should have the power to engage in “good” racial discrimination, and they can be trusted to wield that power in the public interest.

Now the solidarity liberal will ask: Who elected these people? To whom are they accountable? Who voted for university admissions committee members? When did they subject their criteria for allegedly benevolent racial discrimination to public debate and criticism? If college admissions really choose the future elite of the country, shouldn’t they be subject to transparent, fixed rules, not arbitrary, secret exercises of discretion by establishment insiders?

For charity liberals, this question misses the point. Charity liberals believe that democracy – at least democracy in formerly white supremacist America — is incapable of furthering racial progress, because of the irrational prejudices of the non-Hispanic white majority. Racial progress must therefore be imposed from above by enlightened officials who are insulated from direct democratic accountability, including appointed judges and officers of private and public universities. Like early 20th-century Progressives, today’s charity liberals have a touching faith in the wisdom of mostly white, mostly affluent, mostly middle-aged, highly educated elites to do the right thing for the nation on a purely altruistic basis. According to charity liberalism, we should grant this elite extensive discretion, including the power of discretionary racial discrimination, and trust that they will do the right thing, because … well, because they are wise and selfless and public-spirited.

Today in 2013, as it did back in 1913, outside of labor union circles, the mentality of charity liberalism prevails among center-left activists, journalists and academics, practically without any opposition. Members of the college-educated minority are naturally drawn to a doctrine that flatters them as the major force for good in society.

What has happened in the century since 1913 is that the institutions which once provided a voice for the rival center-left tradition of mostly downscale solidarity liberals — farmer’s organizations, labor unions, and local political machines — have almost completely collapsed. But while solidarity liberalism has few representatives among elite pundits and professors, it remains a powerful strain in the American electorate — a strain that conservative populism has managed to manipulate successfully in the last generation. If today’s progressive majority is going to endure, the American center-left will need less charity and more solidarity.