Why don't we use condoms for oral sex?

We really should, but the numbers show that almost no one does 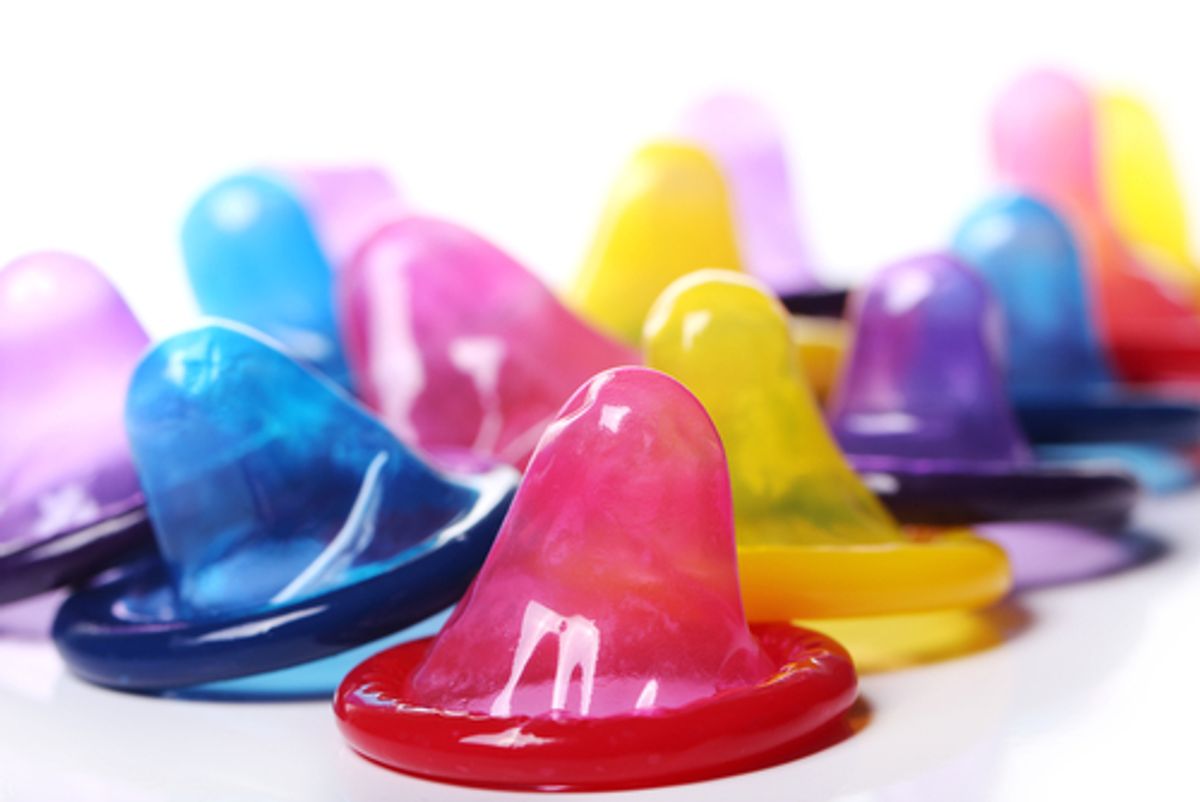 I remember my 27th birthday party better than I remember most parties, mostly because of a guy who wasn’t even there. That week’s New Yorker included a feature by Jerome Groopman, who warned of a new antibiotic-resistant strain of gonorrhea colonizing the throats of hosts from Japan to Sweden: “the harbinger of a sexually transmitted global epidemic.” Everyone was talking about it. Couples clung tighter, singles tried to shrug it off, silently praying they could pair off before this latest nastiness hit our shores. The rueful consensus was that no one in attendance—no matter their gender, race, sexual proclivities, or relationship status—regularly used condoms for oral sex.

Earlier this month Michael Douglas told the Guardian that his throat cancer was “caused by something called HPV, which actually comes about from cunnilingus.” The dangers associated with the terrifying new strain of gonorrhea are greatest for those who give oral sex to men, but the risk of HPV-related oral cancers seems higher for those who go down on women. A 2012 study published by the Journal of the American Medical Association found that 10 percent of men and 3.6 percent of women have HPV in their throats. (It should be noted that the virus’ presence is not a guarantee of cancer.) Along with these sexually-transmitted infections, pretty much everything else is transmittable through oral sex: Standard-issue gonorrhea, syphilis, herpes, hepatitis B, and chlamydia, the second easiest-to-catch STI in America after HPV.

With gossipy stories about a celebrity’s cunnilingus-induced cancer sprouting from every corner of the Internet, the time seemed ripe for a more thorough, if still completely unscientific, poll of my friends. My inquiry—“Have you ever used a condom or dental dam during oral sex?”—was met with a resounding negative. Responses ranged from “Haha, I don’t think anyone actually ever does that” to “Well, no, but it’s not so dangerous as other kinds of sex” to “Blech. Rubber.”

ACCORDING TO SCIENTISTS, MY friends aren’t necessarily a pack of deviant outliers. Unprotected oral sex is inarguably safer than unsheathed anal or vaginal sex, especially in regards to HIV, and it has no reproductive repercussions. But as Tracy Clark-Flory reported in Salon last year, we’ve become complacent because it’s so much less-scary than other common forms of raw carnality. Sure, even the vast majority of 9th graders admit that while oral sex is safer it still includes some risk of contracting chlamydia and HIV. (Only 14 and 13 percent, respectively, thought that there was zero chance of infection.) But while we claim to know there is danger, we’ve shown our priorities with our genitalia: Everyone from U.S. teens (70 percent) to adults (82 percent) to British teens (80 percent) forgoes condoms every time they have oral sex.

Sexual and public health organizations haven’t been particularly rigorous in focusing on the issue, either. With limited resources and facing widespread sex-ed dysfunction, it makes sense to focus on the types of intercourse with the highest potential for damage. It is the norm, in many contexts, to use condoms for penetrative sex, but in 2004 the American Social Health Association (ASHA) found that about one-fourth of single adults never use condoms during vaginal sex. Other sources are even less sanguine. The National Survey of Sexual Health and Behavior only found one-fourth of vaginal intercourse protected (one-third among singles) and the numbers drop dramatically for every age bracket all the way up from 14-to-17 to 61-plus. The Centers for Disease Control (CDC) shows condom use on the rise between 2002 and 2006-to-2010, both “at first sex” and among unmarried people between the ages of 15 and 44 who had sex in the last four weeks. In the latter group 68.3 percent of men and 71.6 of women still reported “never” using condoms. (These CDC numbers refer to vaginal sex; anal or oral sexual practices were not tracked.) With numbers like those, it’s no wonder I haven’t found a single organization prioritizing safer oral sex.

“We don’t have specific campaigns right now for oral sex [and] I’ve never come across any campaigns specifically designed to oral sex,” says Angel Brown, Advocates for Youth’s senior program manager for GLBTQ Health and Rights. “A lot of our work is about making sure communities know about safer sex options, integrating them into everyday life to [ensure] protection for every single sex act, every single time.”

Most public health organizations mention in passing that condoms are a good idea during oral sex, usually as part of a generalized dictum to always use condoms for everything. But some advocates think that needs to change. The antibiotic-resistant gonorrhea Groopman describes in The New Yorker is particularly prone to breeding in the throat, where symptoms are rarely noticeable, allowing it to be easily spread. Oral cancers associated with HPV are on the march, too. Although the disease is most commonly associated with infections of the cervix, the latest data reveals oral malignancies (37.3 percent) as the most common HPV-related cancer. In the male population, they account for 78.2 percent of HPV-related cancer.

“We really haven’t thought a lot about oral sex specifically, but I think that’s changing, for no other reason than the recent attention being given to HPV and oral cancers,” says Fred Wyand, director of communications at ASHA. “We’ve always been talking about safe oral sex, but how prominent do we make it? More and more we are getting evidence that we need to talk about it pretty robustly.”

SEX WORKERS ARE THE only people I’ve spoken with who have regularly used condoms while providing oral pleasure. In countries and states where sex work is legal, there are often laws requiring condom use. Nevada passed such a law in 1988 and a 1998 study in the American Journal of Public Health found no unprotected sex in the brothels under review and minimal pushback from the clientele. “However, perhaps even more critical [than the law] is the ability of sex workers to transform the condom into an acceptable part of sexual activity,” the researchers conclude. (They note a variety of ways condom use was eroticized, overcoming the resistance of all but the most mulish of clients.) “Brothel workers’ techniques to achieve condom use have applicability outside of commercial sex….”

“Female-to-male oral sex, sex workers have been doing that themselves with or without a campaign for a long time,” says Norma Jean Almodovar, sex worker rights activist and executive director at COYOTE-LA. (She says female-to-female protection wasn’t seen as essential when she worked as a prostitute.)  “It can be made part of the erotic experience. You don’t just hand a condom to a guy and say, ‘Here, put this on. I don’t want a disease.’ You’ve gotta not make it clinical, you’ve gotta make it sexy and fun. It works for sex workers; it would work for women in [other] relationships.”

How can such a message be conveyed to a society as notoriously prudish as ours? It’s hard to imagine many public health agencies going in for campaigns touting the pleasures of oral sex, even if it is protected. And fear can be a more powerful motivator: Both sex workers and their clients presumably understand the risks of sex with multiple partners, which would explain why condom usage is more accepted in that setting. (The sex workers interviewed for the 1998 study tended not to use protection with their non-client partners).

Adina Nack envisions a public campaign that would establish the medical reasons for safe oral sex, paired with sexualized imagery to draw the eye. A senior research fellow for the Council on Contemporary Families, she describes a campaign featuring photos of beautiful faces with an emphasis on licking lips and come-hither smiles. The slogans beneath would warn of the toll unprotected oral sex can take on the giver and the receiver.

“Back in the ‘70s, people never thought men would be willing to wear condoms for penile-vaginal or oral intercourse,” says Nack, who is also the author of Damaged Goods? Women Living With Incurable STDs. “Due to the effective campaigning, especially around HIV … we’ve really seen condom use rise for those types of sex. If people were really educated about what they were risking by having unprotected oral sex, I have faith in the public that enough of us would find value in protecting ourselves. Then, there’s a [better] conversation to be had about making safe oral sex fun.”