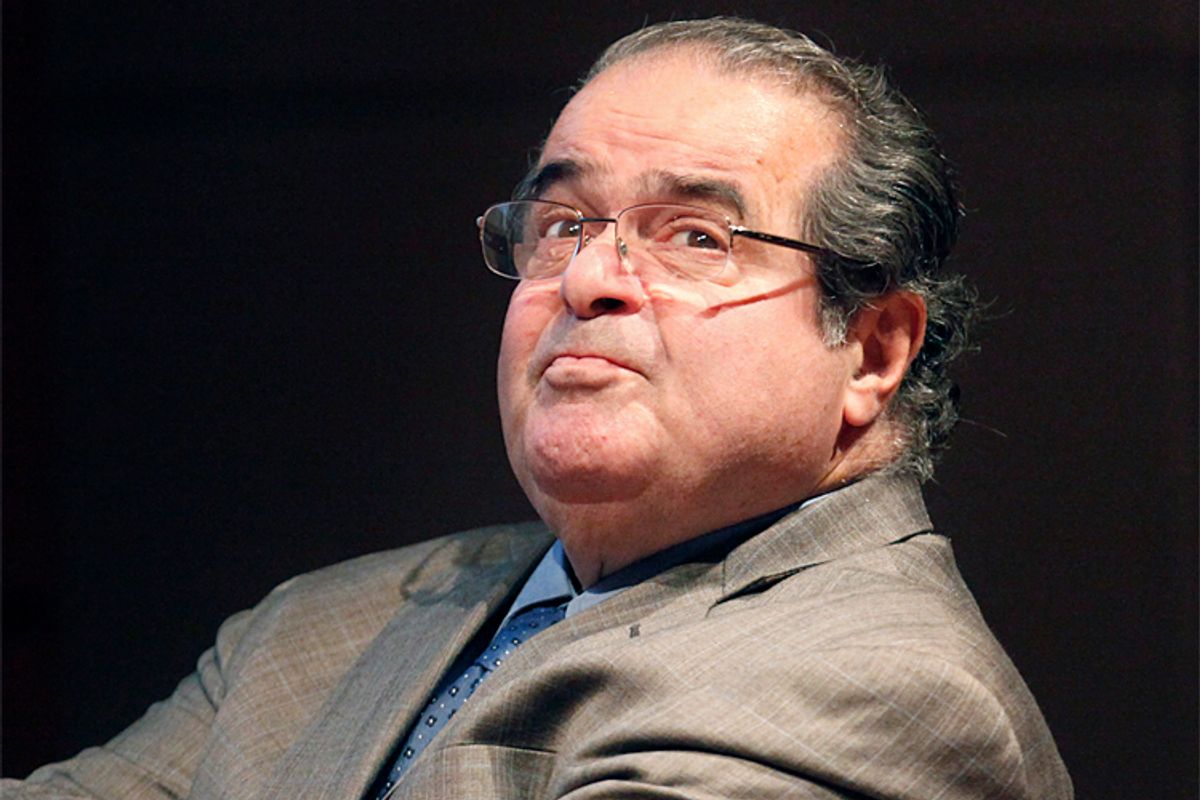 Justice Antonin Scalia's dissent in the Supreme Court case that declared the Defense of Marriage Act unconstitutional is, as expected, fun reading. It's also quite representative of the current state of anti-gay marriage arguments in general: It is much more concerned with whining and raging than it is with actual argumentation.

Scalia's main point is that the court has no right to strike down DOMA. In doing so, Scalia says, the Supreme Court has overstepped its authority.

It is an assertion of judicial supremacy over the people’s Representatives in Congress and the Executive. It envisions a Supreme Court standing (or rather enthroned) at the apex of government, empowered to decide all constitutional questions, always and everywhere “primary” in its role.

The case could be made that this is sort of the only honest Originalist argument -- there is nothing in the Constitution granting the Supreme Court the authority to determine the constitutionality of duly passed legislation, after all -- but obviously this argument rather glaringly contradicts every single instance of Scalia voting to strike down a law. Indeed, it contradicts a decision the Supreme Court announced yesterday, in which the conservatives decided that a portion of the Voting Rights Act that they didn't care for was unconstitutional because they didn't care for it. But if Scalia wishes to recuse himself from all future cases involving constitutional questions, now that he has determined that Marbury v. Madison was improperly decided, I am not inclined to stop him.

Scalia is widely praised, even (perhaps especially) by liberals for his intelligence, his wit and his supposed intellectual consistency -- he is thought to have a very specific interpretation of the Constitution and while it's a dumb one he adheres to it -- but this decision exposes him for the politician that he actually is. As Richard Posner has argued, Scalia will abandon both strict textual originalism and "judicial restraint" when it suits him. (Justice Thomas is actually better at coming up with legal and constitutional justifications for his social conservatism, consistent with his view that the Constitution may only be understood in terms of the political and social context in which it was written.)

In most cases involving homosexuality, Scalia is likely to argue purely from disgust, and to resort to strange justifications for his disgust-based decisions. He is repulsed by homosexuality and alarmed at America's acceptance of it. Therefore homosexuality is Not Constitutional, or something. Just reread his Lawrence v. Texas dissent, in which he invokes the feared "so-called homosexual agenda" and calls the court's majority decision "a massive disruption of the current social order." This dissent avoids most of that sort of talk, but the entire thing is still based on alarm and dismay at changing social mores.

That's because alarm and dismay are just about all that the social conservatives have left. The last legal argument gay marriage opponents have resorted to is a not particularly compelling claim that same-sex marriage might somehow be bad for children, because traditionally marriage was a tool used to force heterosexual couples to jointly raise their offspring. The "tradition" argument lacks any sort of legal justification: "We have always done it this way" is not really a good defense of an act's constitutionality. The other problem with the tradition argument, as Ross Douthat could tell you, is that there is very little about modern straight marriage that resembles "traditional marriage."

The most notable portion of Scalia's dissent isn't the point about the court's lack of jurisdiction, but the portion where he engages in straight-up right-wing victim-complex self-pity of the sort that would not be out of place in a Maggie Gallagher column. (Indeed, Maggie approvingly quotes this very passage.) Scalia moans at length that Justice Kennedy's decision is mean to anti-gay marriage people. It is so mean to them! People who oppose gay marriage are the Real Victims here, because Justice Kennedy has accused them of demeaning gay people simply by wishing to deny them the right to marry:

But to defend traditional marriage is not to condemn, demean, or humiliate those who would prefer other arrangements, any more than to defend the Constitution of the United States is to condemn, demean, or humiliate other constitutions. To hurl such accusations so casually demeans this institution. In the majority's judgment, any resistance to its holding is beyond the pale of reasoned disagreement. To question its high-handed invalidation of a presumptively valid statute is to act (the majority is sure) with the purpose to "disparage," "injure," "degrade," "demean," and "humiliate" our fellow human beings, our fellow citizens, who are homosexual. All that, simply for supporting an Act that did no more than codify an aspect of marriage that had been unquestioned in our society for most of its existence — indeed, had been unquestioned in virtually all societies for virtually all of human history. It is one thing for a society to elect change; it is another for a court of law to impose change by adjudging those who oppose it hostes humani generis, enemies of the human race.

The Defense of Marriage Act sounds so harmless when you put it that way! All it did was "codify an aspect of marriage that had been unquestioned in our society for most of its existence." The actual lives of gay people -- the specific rights and benefits denied them by DOMA and related legislation -- never enter into Scalia's thinking, at all. What matters most is the hurt feelings of social conservatives, who have been accused of malice against homosexuals. (I never knew Scalia cared so deeply about what his political opponents thought of him. He seemed like a thick-skinned fellow before this.)

This is the gay-marriage version of the "calling something racist is worse than racism" argument currently so popular among aggrieved white conservatives. (Justice Roberts basically made this argument in the court's horrible Shelby County v. Holder decision. Calling former Confederate states racist is racist against former Confederate states!) It is the lamest of last-resort arguments, and I'm not sure how same-sex marriage opponents expect same-sex marriage advocates to respond to it. Most people who support gay marriage -- which is now most Americans -- believe that gay marriage bans are discriminatory and unfair, and based more on fear and disgust than any sort of reason or logic. There seems to be plenty of evidence -- including evidence in Scalia's own history of opinions and statements -- that most opposition to gay marriage is rooted in irrational dislike of gay people, with half-assed appeals to "tradition" laid on top. When people point that out, they are accused of accusing their opponents of being monsters. But I'd love to hear how one is supposed to say "I think you're dead wrong on this moral question" without sounding too judgey.

It would've been much simpler, probably, for Scalia to have just said, like Kathryn Jena Lopez did today, he was "nostalgic" for the time when a Democratic president signed the Defense of Marriage Act. That's basically the argument he's making: Stuff is changing too much and I miss the days when everyone felt like discriminating against the gays was fine.